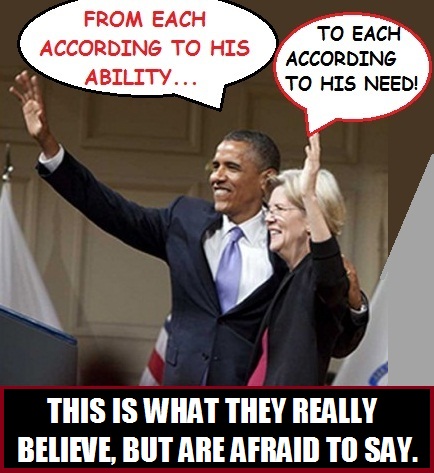 Although forever connected with Karl Marx, these words were commonly used in socialist movements before he wrote them in 1875. It is a challenge to describe an entire socio-economic system in ten words. Our economy seems to be based on "to and from each according to wealth." Anyone I’ve ever talked to who’s traveled to Cuba comes back to say their cab driver or their beach waiter was a doctor who worked an extra job because doctors there don't make any more money than service personnel. And everyone who criticizes socialism will pull out this phrase and say that people in general are too lazy and too greedy to ever work simply to meet their needs. These ten simple words describe a vision of a fair and prosperous world. Whether or not it is vision that can be realized has been debated since the words were first spoken.

Acts 4:32
Now the whole group of those who believed
were of one heart and soul,
and no one claimed private ownership of any possessions,
but everything they owned was held in common.

The early church lived by the principle of sharing work and wealth as equally as possible and the early church thrived and Luke connects these facts. (Acts 4:33-35) At some point that prosperity ended. Is that where the church went wrong? For sure, living by these principals of radical sharing in our context would make an undeniable statement of trust in God rather than in any political system or in any kind of "ism" for that matter.

The word is "need" not "want".  I know people who use their disability money to pay for smart phones because they don't like their "Obama cell phone".  I'm not even sure a cell phone is a need.  We are a greedy bunch.  People are not satisfied with having their needs met.

That verse is from the Book of Acts after the Holy Ghost fell abundantly on the day of Pentecost.  I have seen several communities live that way when caught up in a great spiritual outpouring.  The key is being touched by God.  You can't and shouldn't expect a government to work the same way a God blessed community does.  Forcing this standard on others who have not been touched by God, including your own children, is futile, oppressive, regressive and undemocratic.  If you wish to live this way good for you.  It should be our goal as heads of families to do all we can to provide for the needs of our spouses and children according to the best of our ability.  Many, if not all of us, fail to do that all the time without lapsing into periods of "this isn't fair, who is meeting my needs" or "I deserve a break today".

And theſe two things feel me in (and therein abide with me.)My heart fixed in the Spirit of Love,…See More
7th month 2
1 Comment 0 Likes