Sweet Home Costa Rica: How Far Would You Go For Peace?

How far would you go for your beliefs?

It’s a question more pertinent than ever in today’s globalized world brimming with moral issues easily accessible with the swipe of a fingertip on any smartphone. In a virtual age where tapping a “donate” button equates to activism, how do we decide which causes are really worth risking everything for?

That’s the underlying challenge of “Sweet Home Costa Rica,” a documentary about a group of pacifist Quakers from Fairhope, Alabama, who left behind their lives, friends and homes in the United States in 1950 and moved to Costa Rica to protest American militarism. It’s a story of unusual daring and conviction in a time when standing up to the system wasn’t en vogue in America, and it’s a narrative that has particular resonance in this post-9/11 world.

After America’s long involvement in Afghanistan and Iraq, and in light of the stark lessons of the price and limits of military intervention, “Sweet Home Costa Rica” provides a case study of how determined peace activists can literally remake their own world.

The people of Fairhope made a bold decision at a time when it wasn’t popular to run counter to the normal patriotic line. In the Cold War narrative of us versus them and good versus evil, to refuse to fight or kill the enemy was considered dangerous. But the Quakers, who embrace pacifism in the belief that every human being contains a spark of the divine, rejected that logic and accomplished something remarkable as a result.

Set against the tumultuous backdrop of the Cold War, the nuclear arms race and war in Korea, the film tells the story of several Quakers in Alabama and Iowa who were tried and jailed for refusing to register for the draft. Amid the anti-communist fervor following the Soviet blockade of Berlin and the airlift that broke it, and rising tensions with China, acts of conscience were considered failures to meet existential threats – which was tantamount to treason.

“When the United States passed their Universal Military Training Act of 1948, it was important to make a statement about our feelings against militarism,” said Marvin Rockwell, a Fairhope, Alabama, native who had already served in the U.S. Army Medical Corps as a Conscientious Objector in World War II. But when President Truman reinstated the peacetime draft in 1948 to meet the ‘Soviet Threat’, Rockwell and three others in Fairhope wrote letters to the draft board saying they wouldn’t cooperate.

The four were arrested, tried and sentenced to prison terms of a year and a day. While they served their time, the Fairhope Quaker community debated the moral implications of living in a country that used their tax dollars to fund militarism. And they began exploring alternatives to living in the United States.

The unspoken irony throughout “Sweet Home Costa Rica” is that Quakers came to America in the 17th Century seeking refuge from that very sort of persecution for their pacifist beliefs. And for the first time, Quakers were considering leaving the country for the same reason. The North Korean invasion of South Korea on June 25, 1950, as well as the U.S. entry into the war as part of the UN, threw the issue into sharper relief as 9.5 million Americans were called on to register.

Despite the religious underpinnings of the story, the film is nearly devoid of dogma, which puts the tale in more of the context of social justice than religion.

Max Carter, retired professor of religious studies at Guilford College in Greensboro, NC, explains that that while many people see pacifism as Utopian in light of modern global power politics, the anti-slavery movement was once seen in a similar vein. For Quakers, he said, it’s a question of moral imperative as opposed to practicality.

Quakerism “asks that we examine our own lives to see whether the seeds of war lie in our own lifestyles,” Carter said. “To see if the seeds are sewn in our acquisitiveness, our aggression, our use of resources, the way we treat the environment. And the peace testimony needs to address that activism. How do we actively choose to use our lives and our efforts and our resources to remove the occasion for war.”

As the debate in Fairhope intensified, Hubert Mendenhall, a Fairhope dairy farmer and a Quaker, and his wife Mildred, signed up for an agricultural tour of Central America. Mendenhall witnessed the trials of the four who had refused to register and decided he couldn’t live in a country where the atmosphere was so militaristic. The Mendenhalls were initially interested in Guatemala, but Costa Rica captured their imaginations: Not only were the people welcoming and the land ideal for farming, but the country abolished its army in 1948.

Upon their return to Alabama, news of their plans to move spread to Iowa where the Mendenhalls had roots. And when the four Fairhope draft resisters were released from prison in November 1950, eleven families and more than 40 people from Alabama and Iowa sold their homes and farms and moved to Costa Rica.

It’s difficult in today’s world of the Web, social media and instant messaging to understand just how bold it was for a group to consider pulling up stakes and relocating to a foreign country, literally on faith. Little information was available about Costa Rica and the only way to reconnoiter a location was to go. The group had almost no knowledge of what lay ahead, which lent a pioneering aspect to the whole venture. 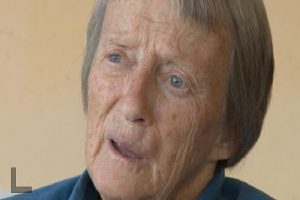 “I don’t think I’d ever heard of Costa Rica,” said Mary Rockwell, a Monteverde founder from Iowa. “When you sent a letter from the States to Costa Rica, back in those days, it would probably go to Puerto Rico or somewhere. Everybody figured Costa Rica was an island. Nobody knew it was a Central American country between Nicaragua and Panama.”

She and her husband Estin, who had been jailed for refusing to register in Iowa, were inspired by the prospect of establishing a community where they could live out their ideals in peace. But she also admitted they were drawn by the adventure of it all.

After a months-long search, the group found land in the cloud forests of the Western Highlands of Costa Rica. There were no roads, no schools, no electricity and only a few squatter’s huts. They named their new community Monteverde, ‘Green Mountain,’ and set about rebuilding their lives from the ground up based on pacifism and an economy centered around dairy farming and a cheese factory.

The sheer physical effort it took to build the community in such a remote region lent a harsh practical reality to what might otherwise have seemed a purely Utopian endeavor. Rarely does anyone get to so vividly test their beliefs and the daunting obstacles they faced seemed to only further validate their convictions. Nearly 70 years on, each of the remaining founders featured in the film were absolutely certain they had done the right thing.

Today, Monteverde continues to thrive with a population estimated in the hundreds. It is home to a Friends School, a dairy and several biological research institutes. It is also home to the Monteverde Cloud Forest Reserve, established to protect the community’s watershed. It has gradually grown into what National Geographic called “the jewel in the crown of cloud forests” because of its biodiversity. And the community is considered a model for sustainable ecotourism.

Jody Jenkins is the Director of “Sweet Home Costa Rica.” He has been a print, television and documentary journalist for thirty years. He is a former Scripps Fellow at the University of Colorado, Boulder, and a former editor at France 24, a 24-hour television news network in Paris. Completion of “Sweet Home Costa Rica” is anticipated for December 2016. To learn more and to get the latest updates, visit the film’s Facebook page.

A WARNING TO THE WORLDThat are groping in the dark, afterSECTS, OPINIONS, AND NOTIONS,Which are all…See More
6th day (Fri)
0 Comments 0 Likes

A Conſiderable QUESTION ABOUT Government,(Of very great Importance in reference to the ſtate of the…See More
6th month 14
0 Comments 0 Likes