Reflections on a Sojourn in Switzerland: Time, Friendship, and Faith

In this reflection ESR MDiv student Anne M. Hutchinson shares about her recent visit to Switzerland:
It’s hard to conceive of Switzerland without thinking of chalets, cheese, chocolate, cleanliness, and clocks. There are indeed chalets with their wide roofs and elaborate exterior wood carvings. However, La Chaux-de-Fonds, the town in which I stayed, is famous for its Art Nouveau architecture and design. Cheese was plentiful, and is essential for traditional dishes including raclette and fondue. Switzerland is a chocolate lover’s dream: grocery stores offered every kind and flavor of it. And then, cleanliness. An acquaintance once told me that her mother instructed her to clean the house as if Jesus were to visit. Whether the Swiss believed the same or not, homes were impeccably clean and tidy and subject to regular dusting and arranging. Messiness was simply unimaginable. If cleanliness is next to godliness, the Swiss meet the criteria. 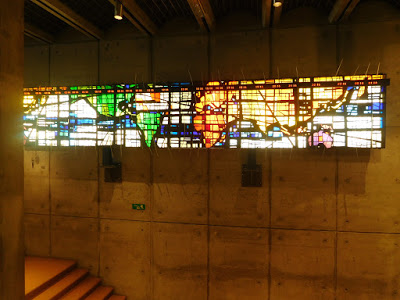 And as for clocks: When I spent two weeks with a friend in that historic watchmaking town, it was well-nigh impossible to not be conscious of time. Clocks were everywhere, on public buildings, in the window displays of watch shops. The museum of horlogerie showcases a dazzling display of all kinds of timepieces: miniature painted pocket watches, an outdoor carillon clock, talking clocks, a Turk on a flying carpet clock, and numerous other timekeeping devices. Several of the large timepieces featured the figure of the Grim Reaper, amemento mori of the ephemeral nature of life. At one time, the three churches in the town center all rang their steeple bells on the hour and the quarter hours, but they did not ring in synchronicity. One church’s bells would stop only for the second to begin ringing, and the second barely ceased before the third began. It was a real challenge for anyone in the neighborhood around them to sleep amid that joyous cacophony.
My friend and I were always rushing to catch a train or a bus, which depart exactly on schedule.  Our pattern alternated between rushing to catch a bus and relaxing once we got to our destination. Taking buses marked my days there: buying the ticket at an automated machine, verifying the departure time, waiting expectantly, greeting and being greeted by the driver, getting off at the station to continue by foot or transfer to a different bus. One must be mindful that stores close at 5:30 on weekdays and are closed on Sunday and often during the lunch hour, making for a sense of sabbatical, for employees as well as customers, as well as creating the need for advance purchases of food and supplies.
Legend has it that, due to the long cold winters, the people of La Chaux-de-Fonds, primarily farmers, needed an occupation and additional income during the winters. Watchmaking was a natural fit. Many a family had a small atelier within the home for watchmaking, with space for the cabinet and tools. Farming and watchmaking are both unglamorous activities, however much one might want to glorify rural life and skilled manual labor. There was no running water in the town until the late 19th century, the occasion of which is commemorated by La Grande Fontaine in the city center, a fountain in which a group of sculpted turtles spew water.
I met with a group of Swiss Quakers my first Sunday there, at the home of a hospitable Quaker family. We chatted over tea, held a Meeting for Worship, and had a lovely meal, seated cozily together at the long dining room table. The meeting for worship was also a memorial meeting for a French Quaker who had recently passed away. Because there was no Quaker meeting close to her home in France, she regularly attended meetings in the Suisse-Romande. She was remembered with joy and affirmations of her service and lovingkindness. And, in vocal ministry, Sigrid, a serene and articulate Friend, presented us with a query: what is the role of a single snowflake in the development of an avalanche? 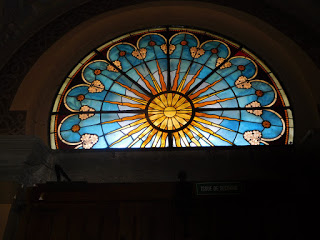 I visited the town’s synagogue, an architectural gem inaugurated in 1896. I was moved by the First Testament verses painted on the domed ceiling, translated to French, such as “Tu aimeras l’Eternelton Dieu de tout ton coeur de toute ton âme de tout ton pouvoir” (Deut 6:5). I was awed by the stained-glass windows, embellished with geometric designs; I marveled at the wooden benches with tiny drawers in front of them for storage.
I visited churches also. On the fifth Sunday of Lent, I went to an ecumenical service dedicated to the environment, which was hosted by Temple Saint-Jean. Priests and ministers from three churches prayed and read scripture. A rustic loaf of bread was passed among the congregants for Communion. The sermon was delivered by a Malagasy who spoke about environmental degradation in his homeland. Scientists now say that there are no forms of life not affected by climate change. What can our humble prayers and actions do in the face of environmental disaster?
On Palm Sunday, called Dimanche des Rameux, (officially Dimanche des Rameaux et de la Passion du Seigneur) we went to Mass at Sacre-Coeur. It is a breathtakingly beautiful church, ornately decorated with stained glass windows and murals, but with some modern touches. The service began outside at one of the side doors with the distribution of branches in baskets—not palm branches in this case, but those of plants native to the area, apparently boxwo
od. The priest blessed the branches, sprinkled the congregants who carried them with water, and
invited the congregation to enter through the main entrance, suggesting that we proceed in the spirit of the people greeting Jesus into Jerusalem. During Mass, I heard the familiar scripture verses and prayers
, albeit in French. We rose, sat, and genuflected on the hard wooden pries-dieu. The church body reflected the cultural diversity of the town: Swiss, Italians, Portuguese, Slavs,


Africans. Most wore their Sunday best; a few wore jeans. Among the Africans, the men wore dashikis, the women colorful gomesis. The priest read the traditional Palm Sunday Mass; a soloist with a hauntingly beautiful voice sang; we recited the Our Father and the Apostles’ Creed; we gave each other the peace; the congregants filed up to take Communion. There were poor acoustics in the high-vaulted church, so it wasn’t possible to hear well, but my Catholic upbringing served me well in following the words and the movements. As a benediction, the priest invited us to go out into the world taking our faith and practicing it in our lives.
The French Mass was only one of several that day: other Masses in Italian, Spanish, and Portuguese, as well as a French/Italian Mass, would follow. As I read the Bible in various languages, it occurs to me that the words of Scripture, as translated into different languages, open up new understandings. For example, in French, disparition is said rather than death; siècles et siècles rather than forever and ever. I am reminded that the living Christ speaks in all languages and cultures.

You can read more from Anne here: http://esrquaker.blogspot.com/2017/05/reflections-on-sojourn-in-swi...