These words come from a popular 19th Century Celtic song. The song cautions against trust and risk ending with the couplet: “And I have no wife to bother me life, no lover to prove untrue, the whole day long I laugh with the song and paddle me own canoe.” Such wisdom is contradicted by phrases like, “there is strength in numbers.” Winnipeg has a relatively small population of people with African descent. And while a few African gangs were kept apart from each other, the correctional system generally placed people with such backgrounds together. Presumably this was to protect such people from racial violence if they were isolated but it also placed people who had been in Canada for several generations with recent immigrants who had only been in Canada for a few years who they had very little in common with other than pigmentation. I remember one such person explaining that he was asked immediately upon entering his range, “Who are you down with?” to which he replied, “Myself, I am down with myself” to indicate he had no intention of identifying with any of the gangs. “Down with myself” is a contemporary equivalent of declaring that you paddle your own canoe. 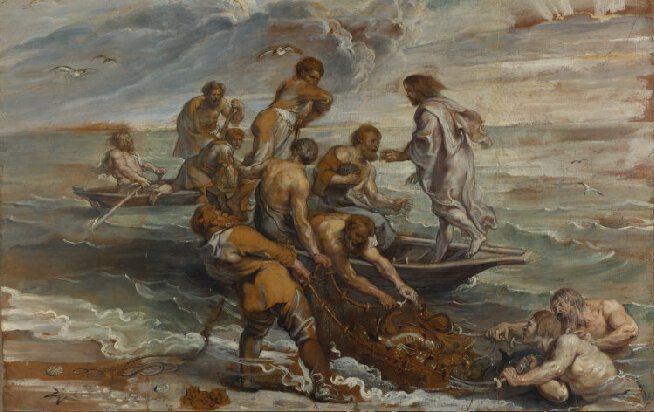 An interesting way to read scripture is to take the perspective of the different characters in a given story. For instance, in the call of the apostles you can put yourself in the place of the parents of the fishers. As reported by Matthew, we see very quick decisions made by Peter and Andrew, followed by James and John. Presumably, fishing was a family business and the parents watched a stranger come and steal their labour. Their children were their only security for the future of their family business. What did they imagine as their boys walked away with a stranger after one line of conversation? This is an absurd scenario when pictured in your mind’s eye. What kind of parents would embrace such a moment? Jesus seemed very intent not to “paddle his own canoe” and chose instead to compel twelve companions to join his journey.

Fishing around the Sea of Galilee was not a mom-&-pop family business; what I've read describes rather a precarious, strenuous 'independent contractor" sort of occupation.

The boats would be rented out for the day to a crew (family, likely) for a big cut of the catch. Herod Antipas ultimately controlled the operation (and the marketing of salted fish) and whoever he'd put in immediate charge of it no doubt did well.

If the sons took off, the old man would probably just go out the next day with someone else's crew...

An interesting way to read scripture is to take the perspective of the different characters in a given story.

Read the story of David & Nathan in the scriptures (2Samuel 12). It would seem the authors of scripture agree with you -- and advise putting yourself in the sandals of the character you dislike the most! George Fox would seem to have had a similar experience (recorded in his journal, 1648).

Why do you think Jesus was a stranger to them?

Good questions James. It is a gap in the story I filled in.  And I am not sure I can give much of a better answer than it does not say he wasn't. Which is not a good answer.

In the Gospel of Luke we read that Jesus had entered the house of Simon and healed his mother-in-law the chapter before he showed Simon, James and John how to catch fish.  We can be sure that Simon had told James and John, his partners, about the healing so they were all primed and ready to go even before the fishing expedition.  These people were under the foot of an oppressive government and were waiting for the Messiah to deliver them and make them a great nation again.  They had been raised on a rich History of God led national glory.  Today a Jewish mother wants her children to be Doctors, including Pediatricians, back then they wanted them to be deliverers of the Nation of Israel.  God's timing was perfect

These people were under the foot of an oppressive government and were waiting for the Messiah to deliver them and make them a great nation again.  They had been raised on a rich History of God led national glory.  Today a Jewish mother wants her children to be Doctors, including Pediatricians, back then they wanted them to be deliverers of the Nation of Israel.

I think you may be overselling the point. I always use the film Casablanca as my model of Israel. An Arabic city conquered and re-re-conquered. You have partisans (of varying stripes), collaborators, demoralized pragmatists, idealists, and most people shifting categories as needed to survive.

You did start by suggesting we put ourselves into the scene to get a better feeling for it.  My viewpoint answers your question of how James and John could just leave the family business so quickly.  I would choose Exodus over Casablanca to get a feeling for Israel, though I agree not all Israelites are Israelites.

James, I was trying to say my choice, interpreting the sons as irrational, was not particularly defensible other than I have heard it preached that way.  Indeed your explanation of how James and John could leave the scene so quickly is helpful.  I have also thought that there could have been a long dialogue that was shortened due to the nature of the writing.  Thanks again.

The conciseness of the Bible never ceases to amaze me.

Martin Kelley commented on Olaf Radicke's blog post 'It's time for quakerquaker.org to move to Mastodon'
"Hi Olaf, The Ning platform which QuakerQuaker.org uses has mostly frozen in features and to upgrade…"
9 hours ago

I like the approach of quakerquaker.org to connect people. But I think it is time that…See More
yesterday
1 Comment 0 Likes

Christopher Hatton liked Forrest Curo's discussion Why Has It Needed To Be Like This?
11th month 29