Meet Hannah Whitall Smith, a “Convergent Friend” at the turn of the nineteenth century 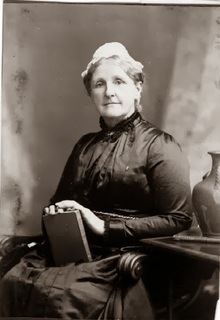 In 1903 Hannah Whitall Smith, a free-spirited product of "Orthodox Quakerism” in the nineteenth century, proudly admitted in her spiritual autobiography:
“I have always rather enjoyed being considered a heretic, and have never wanted to be endorsed by any one. I have felt that to be endorsed was to be bound, and that it was better, for me at least, to be a free lance, with no hindrances to my absolute mental and spiritual freedom.”
When I read that line I knew I had found the Quaker woman of my dreams!  A woman who defies classification even today, whose life embodied multiple identities and contradictions, yet a woman who has illumined my own life as well as my understanding of the evolution of Quakerism.   Hannah was evangelical in orientation, and today she is read and revered largely by conservative Christians-- yet she was a universalist, and admitted she held heretical views.    She was progressive, even radical in politics, a fierce feminist who marched with her daughters for woman’s suffrage.   Later in life she gave labor union speeches and explored Christian socialism. A birthright Orthodox Quaker, she was baptized by water as an adult.  An author who wrote her most famous book on the subject of happiness and truly espoused joy in life, she experienced deep pain and suffering, and both fame and scandal in her very public life.
You can read more from Carole here: http://esrquaker.blogspot.com/2013/10/meet-hannah-whitall-smith-con...

Hannah Whitall Smith's life story is fascinating, complex and tragic.  Her one son who was a devout Christian Friend died in an accident when he was a student at Haverford College.  The other children went in several different directions; none to my knowledge espoused Orthodox Quaker faith as adults.

I believe that it was Logan Pearsall Smith who remarked that everyone (or nearly everyone) in the family wrote a memoir.  Also, Hannah was a very prolific letter writer.  Her correspondence is mostly archived at Indiana University-Bloomington, I think.  Someone should research Hannah and her complex relationship with Friends.

Her story is intertwined with the erosion of Quaker Christian identity in Philadelphia Yearly Meeting (Orthodox).  The Philadelphia Orthodox were deeply and IMHO adversely affected by wealth and education.  Eventually, they got swallowed up by PYM liberalism.  Hannah sought throughout her life to "keep the faith" under adverse family and church conditions.

May the Lord bless and keep her in everlasting fellowship with Him!

Comment by Martin Kelley on 10th mo. 8, 2013 at 7:13pm
Given the disclaimer that Smith defies categorization, I wasn't sure about the headline's claim of "Convergent Friend." I'm glad I overcame my skepticism to start reading the link to her biography.

I'm surprised just how deeply she's going into her experiences of Quaker spirituality of her childhood. I especially appreciate the section around page 55 where she says that many of her later spiritual experiences were unconsciously shaped by her upbringing.

The "Christians secret to a happy life" is one of my favorite books.  It does a great job of reinforcing in us or revealing to us the eternal perspective we need to be victorious on our journey and not victims of life's circumstances.  It puts flesh on Paul's statement that we are more than conquerors in Christ Jesus.

I think it would be instructive to compare Hannah to Lucretia Mott.  Both were 19th Century Philadelphia Friends.   Hannah was Orthodox; Lucretia was Hicksite.  Both were uncomfortable with their respective Quaker cultures.  Lucretia encountered lots of resistance, but finally shaped Hicksite culture in a decisive way.  She achieved iconic status in the Hicksite world and, indeed, in American history.

Hannah never did really make peace in any decisive way with her Quaker heritage.  She also achieved iconic status, but in the evangelical culture.  Late in life, she repudiated her famous *The Christian's Secret of a Happy Life*.

Hannah's own life was anything but happy.  Her husband became a philanderer, and lost his Christian faith.  I think four of her seven children died before they reached adulthood.  One daughter married a Catholic, and their marriage ended in divorce.  As I recall, the divorce was "messy" and Hannah may have had to raise the children.

As I have already noted, the Orthodox Quaker culture in Philadelphia underwent "erosion" during Hannah's lifetime, mostly under the influence of Rufus Jones.  None of Hannah's living children espoused the Quaker faith.  (Interestingly, we never hear much about what happened to Lucretia Mott's children.  Did they too abandon their parents' Quaker faith???)

Carole Spencer wrote: "When I read that line I knew I had found the Quaker woman of my dreams!"  I doubt that Hannah Whitall Smith would see herself as a role model for anyone, certainly not a "dream Quaker".  I think she led a life full of pain and trouble, and endured what came her way as best she could.  May the Lord have mercy upon her, and upon us all!

William, I have been researching and writing about HWS's complex relationship with Friends for several years now.  My article entitled "Hannah Whitall Smith and the Evolution of Quakerism: An Orthodox Heretic in an Age of Controversy" will be coming out in the next issue of Quaker Studies (a British periodical).  I claim that Hannah did make peace with her Quaker heritage.  And yes, her life was difficult, but also deeply fulfilling, and she never lost her joie de vivre, or her sense of humor. She had an indomitable spirit. If you haven't read it, do read her spiritual autobiography.

She was a mentor to hundreds of women in her lifetime, and she has been a mentor to me through her writings.  That she was a woman of contradictions and could not fit into any box is a part of her great appeal to me.

Hello, Carole!  Thanks for your response.  I look forward, sooner or later, to reading your forthcoming article.

I got into researching H.W.S. through my interest in Orthodox unprogrammed Friends.  My focus was on Richard Thomas of Baltimore (Orthodox) Yearly Meeting; I think he was related to Hannah, but I don't remember how at the moment, possibly her cousin.  As I kept pulling on loose threads in the ball of yarn, HWS appeared on my "screen".  I read The Unselfishness of God, which also has considerable merit as an historical ethnography of Philadelphia Orthodox Quakerism.  I read Hannah's touching biography of her son, the Haverford student.  And Ray (Rachel) Strachey's A Quaker Grandmother, a biography of Hannah by one of the grandchildren she raised.  And then there was Logan Smith's (a son of Hannah's)book Unremarkable Relations, which was referenced by Howard Brinton in Friends for 300 Years, but without a citation.  And then there was Hannah's biography of her parents, and on and on.  I read all of these years ago, so I do not have a fresh recollection of their contents!

My impression of Hannah's life differs very much from yours.  I think she did not find her life deeply fulfilling.  I recall one episode where she and a relative watched Hannah's elderly husband Robert walk out the door with a bouquet of flowers, on his way to see one of his girlfriends.  As I recall, Hannah reacted with sad resignation.  And I came close to shedding tears as I pondered the scene.

In any case, I am glad that you are researching Hannah's life, from a Quaker perspective.  She and the unprogrammed Orthodox Friends have for too long been neglected by Quaker historians.  I trust that your work will not be hagiographic; the real Hannah is a much more compelling figure than Hannah the Quaker saint!

I have a copy of The Unselfishness of God which is in such new condition that the pages have not been "cut open", except the first few which Ihad to cut to start reading! I never got very far in it but I did read "The Christian's Secret of a Happy Life" many years ago when I was a new Christian.