Liberal Quaker Skepticism and the Meaning of Servant-led Leadership 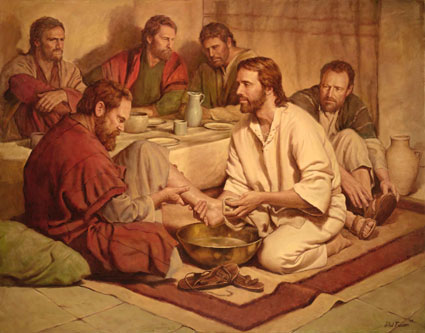 After that, he poured water into a basin and began to wash his disciples' feet, drying them with the towel that was wrapped around him. He came to Simon Peter, who said to him, "Lord, are you going to wash my feet?"

Jesus replied, "You don't understand now what I am doing, but someday you will." "No," said Peter, "you shall never wash my feet." Jesus answered, "Unless I wash you, you have no part with me."

My religious environment is full of seekers, skeptics, and lost sheep. Liberal unprogrammed Friends are the Doubting Thomas’ of Quakerism. The difficulty in ministering to the eternally suspicious cannot be over-stressed. I must admit that often times I feel like C.S. Lewis, trying to distill the most salient talking points as a defense against those who would forever resist them.

Friends have, no doubt expressing their own sentiments, instructed me to be patient. Some took years of contemplation and proper seasoning to make what, for them, was a momentous decision. It has been my understanding that a person doesn’t take one leap of faith in his or her lifetime, but several of them. While I empathize with what for some must be a substantial tussle with the conscience, I am saddened by how much effort must be first undertaken.

Liberal Friends sometimes only pursue formal membership in a Monthly Meeting as a means to some desired end. Perhaps they feel strongly led towards a particular sort of committee membership. Other times, they are interested only in one particular event that best speaks to their own cares. When I was more actively involved in scheduling Young Adult Friend activities, some attenders only showed up for very particular, narrowly defined personal wants and reasons.

It is difficult for me not to feel a little exasperated in contexts such as these. The most recent example that comes to mind is that of a Young Adult Friend who has joined the Meeting to legitimize her occupation. She is an interfaith chaplain and a pastoral therapist. Unless formal certification necessitated formal membership, she would not have pursued this course of action.

There are two parodies of the truth which different sets of Christians have, in the past, been accused by other Christians of believing: perhaps they may make the truth clearer. One set were accused of saying, "Good actions are all that matters. The best good action is charity. The best kind of charity is giving money. The best thing to give money to is the Church. So hand us over ₤10,000 and we will see you through." The answer to that nonsense, of course, would be that good actions done for that motive, done with the idea that Heaven can be bought, would not be good actions at all, but only commercial speculations.

The other set were accused of saying, "Faith is all that matters. Consequently, if you have faith, it doesn't matter what you do. Sin away, my lad, and have a good time and Christ will see that it makes no difference in the end." The answers to that nonsense is that, if what you call your "faith" in Christ does not involve taking the slightest notice of what he says, then it is not Faith at all — not faith or trust in Him, but only intellectual acceptance of some theory of Him.

I return to the Friend who desires to be a chaplain. Her work, as envisioned, would speak to those who are squeamish about religion, any religion. Though it pains me to contemplate, I know she will not hurt for business. As has often been addressed in Christian Left circles, the Religious Right has distorted and twisted the true meaning of our faith. The Young Adult Friends with whom I associate regularly follow a highly individual path, one often tortuously protracted. Then and only then can they find complete comfort. It may take five years, and it may take fifty.

Spiritual maturity often requires willful self-reflection and trust in the Holy Spirit to recognize those crucial distinctions. True believers in some areas of their lives, liberal YAFs immediately form negative value judgments around the very idea of religion. Leaders far more wise than me have found the challenge cut out for them extremely daunting.

Reasons for joining a Monthly Meeting, as I have observed, are not holistic, they are segmented. By contrast, I joined because I felt a Divine leading to be present within that congregation. That was the extent of my analysis at the time, and I was so awed by the revelation I asked few questions. God told me I needed to learn life lessons and bolster my Spiritual development, so I listened. My work has unfolded piecemeal, bit by bit. I know enough to recognize that it is not yet been fully revealed. Beyond that, I have no clue what time will offer me.

Now to address the Scriptural passage by which I introduced this post. It is found within the Gospel of John. Shortly before his death, Jesus decided to take on a thankless task usually expected of a servant. His disciple Peter, in his time-honored role, at first completely missed what Jesus’ selfless act implied. Service ought to be for its own sake, without the expectation of something in return.