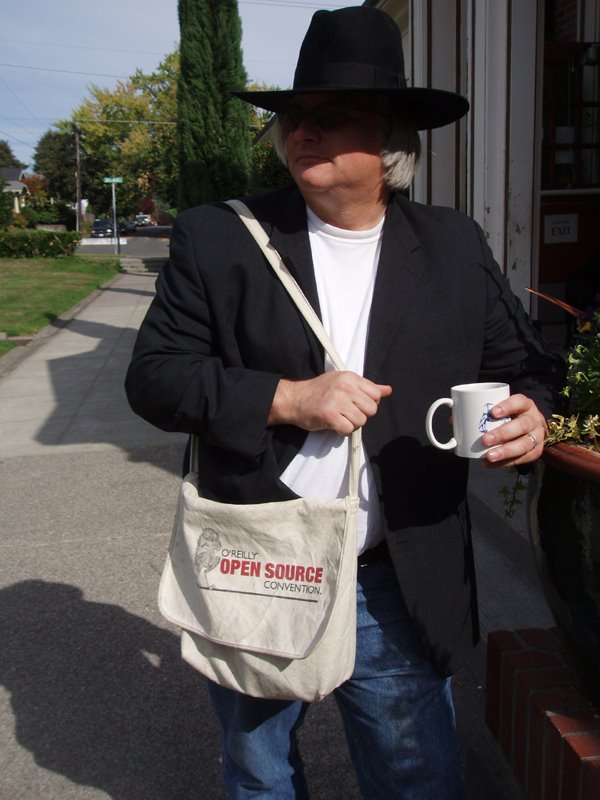 For example, driving while naked is not permitted in Portland except on designated days and routes on a bicycle.  Some don't bother with permission but that's another story.

I'm dressing for First Day as we speak, and know that "Reedy Tweedy" and "Friendly Farmboy" are both OK.  Reed College is a liberal arts mecca nearby with lots of overlap with Friends, although it professes no outwardly Quaker credentials, is not like Earlham or Guilford in that way.

The Quaker Academic, with a certain look, is considered "plain" enough to pass muster.  What we enforce is "plainness" in our dress, meaning no hoops or gadzooks amounts of makeup.  Some makeup gets by, even for those not gendering as female, but we're in Portland, where gender bending is a favorite pass time.

Tattoos (part of Body Art as we call it) are really "in" (considered groovy) as well and its fine to show those in Meeting.  We're not distressed by colored skin.  Just keep the costumes toned down.  I mean, a Lady Gaga type outfit is fine for Talent Night, when we're free to go off code (other standards of good taste may apply), but not for Business Meeting.  Lots of bling and fancy regalia is too distracting for one thing.  Plain dress is pragmatic, conducive to getting a lot done.

I'm going for High Tech Cowboy this morning (includes a hat), in part because it's summer and hot out.  Reedy Tweedy is more winter-time garb.  Sherlock Holmes is another good one (minus cape), for those rainy Octobers, or even Winters.

You may use your imagination regarding these Friendly Farmboy / Farmgirl and Urban Cowboy / Cowgirl outfits, which involve  bluejeans most likely.  I need to leave for Meeting now.  No time to discuss the bonnet or any of those optional accessories.

Any outfit is OK with a laptop by the way, and it doesn't have to be an Apple, though it may be.

We have guest WiFi and people routinely hack in, once learning our password.  It's Coffee Shop and/or Airport ethics as we know we get out-of-towners with interesting not-Latin-1 nametags, eager to check the progress of this or that flight.

PDX International is a next stop for some.  Not for me this morning though. No one to meet or drop off, nowhere to go today.

I'm just going to and from by surface streets, taking mom in the "torture taxi" (see above why I call it that).

Quakers dress plainly for many of the same reasons engineers do.  Neckties tend to get stuck in equipment, spinning machinery, same with capes.  The pocket protector was replaced by the "man purse" or "backpack" long ago (I use a shoulder satchel, a kind of briefcase but softer).

Quaker Steampunk might be a look especially if the eco-village ambience were more retro (the technology might be ahead).  We give more leeway to our Junior Friends to experiment with new looks, as we're savvy about fashion as a relatively benign use of ingenuity.

It's not that we're against models on runways for a day job ala Bruno.  We're not Puritans. The way extraordinary outfits get to stand out and appear glamorous is precisely when there's a backdrop of "plain" to play off against. We help the fashion mavens more than hurt them.

Besides, within the space of "plain dress" there's plenty of room for new fashions, such as wearing FitBits and other health-related personal devices.  An Apple Watch is not verboten, but please silence it during Meeting for Worship!  Don't talk to Siri unless you know how to do that inwardly.

Quakerism is a kind of role-playing.  Some of us are in show business, are or have been opera singers, and/or actors (James Dean).  There's no requirement to avoid "dressing up for the occasion" across the board, with no exceptions.  We oppose all mindless dogmas and the robotic behaviors they engender.

What we want to avoid, around Meeting, is using clothing to encode a hierarchy.  Egalitarianism is a goal, likewise true in the case of school uniforms (I used to teach in a Catholic school for young women).

That's why "not doffing one's hat" became such a hallmark, especially around royalty.  Quakers were agitating for a more level playing field, one not based on either feudalism or indentured servitude, let alone slavery or exploiting the undocumented.

Quakers were thrown in jail for not kowtowing to some 0.01% at a fragile time, when the power and influence of this entitled / privileged class was seen to depend on the perpetuation of such faddish rituals.

Quakerism was taken for a brand of terrorism at first, by the rich and spoiled, a reputation that would follow it through the Underground Railroad period at least.  Conditions improved when royalty and Friends started to inter-marry more in the UK.  Once this taboo was broken, most stigmas were lifted, but not in the US where the US Civil War drove a wedge through civil society.

OK, here I am at Multnomah Meetinghouse, on Stark Street in Portland.  This used to be a factory for making sensitive electronic measurement devices (ESI), Jantzen swimsuits before that.  Zoned a factory to begin with, residential infill then occurred as Portland's population expanded.

If still a factory, Stark Street Meeting might have disappeared by now, however religious institutions were able to grandfather themselves in under new zoning.  Our building has been enhanced to code and beyond.  We enjoy a Leeds Platinum certification, the envy of many.

In my pictures above and below, I'm showing permitted uses of accessories that might seem problematic in a Quaker context, just to help newcomers fine tune.

First, the book, Violent Python, is not about sewing landmines or encouraging gun ownership, but about stressing your own security systems in advance, to make sure they're real-world-ready when the malware shows up.

As a conferee fresh from Portland Pycon 2016, wherein Pythonistas were "getting religion" (per the language-action perspective), I'm professionally interested in cyber-security, or "Safety in Cyberia" as some call it.

Next, there's the hat, a black one, and all the attendant issues regarding "doffing" and "not doffing".  One might assume that just because I place a black hat next to Violent Python, that people should infer I've joined the so-called "black hat" team in the "innovative outside of the box thinker hacker" sense, as shared about at Pycon by one of the keynote speakers, the Security Princess with Google Chromium.

She explained how her company (Google) is both tolerant and inclusive of those doing security testing of basic infrastructure.  This work needs doing. How else to find weaknesses?  The goal is to not trigger any physical violence but to remove the causes of war, before they rise to some threshold level.  Like many companies, Google offers cash awards to hackers who break in to systems set aside for such testing.

However in my case the color of hat is a mere coincidence.  I consider white hats less stylish, at least for my outfits.  True, the hat says The Gun Club on the inside, as the brand of Stetson it is.  I showed that to our erstwhile Clerk of Oversight (Jeff Lumb), getting clearance.  I don't mean it literally.

Rest assured, outward weapons are not permitted on a Quaker campus (pocket knives a different matter -- they have useful uses).  Our private properties are not to be used for sewing landmines either.  There's a code of conduct.  But when it comes to branding, cartoon guns, computer games, fairy tales, dreams, we know the difference.  Violent imagery, as by Hieronymus Bosh in depictions of Hell, are not verboten on our Friendly canvases and screens.

We also know that even if Sigmund Freud was mistaken on many matters, repressing unconscious demons is often the best way to give them more power.

We do not shy away from depictions of violence, out of our concern to Love our Enemies.  Jesus was no head-in-the-sand phony either.

Our children are not forbidden to watch Grimm, or Buffy the Vampire Slayer for that matter.

Quaker churches (as distinct from meetings), may differ on that score.  Our acceptance of so-called "pagan" iconography traces back to a shared mistrust of the Inquisition, which presumed to set universal standards for us all (a lot like the SAT in some ways).

Of course families vary in their practices, but if your kid, a Junior Friend, shows up in meeting a died-in-the-wool Joss Whedon fan, don't expect Reedy Tweedy or Friendly Farmboy to try talking her or him (or them) out of it.  We're Liberal wing, quite open to popular culture, Lady Gaga, computer games, making beer.  Don't confuse us with Prohibitionists, even though many Quakers were indeed Prohibitionists. Long story.

I am grateful to Joe Snyder for role modeling "the barefoot look".

Recently, Joe has pioneered "colorful socks" (no shoes) as a look.  He did wear a shirt however.  Joe is a respected elder, Biblical scholar and representative of our brand of Quakers to Ecumenical Ministries of Oregon, of which I used to be an employee. 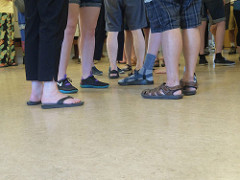