A chain is only as strong as its weakest link 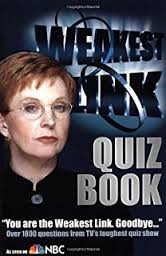 Often this phrase refers to a person in a group or team and this meaning was reinforced with the popular TV show, The Weakest Link that had tremendous, albeit brief, popularity in 2001.  The aphorism originated in the 19th century. It referred to the links in an argument, suggesting that even the strongest of logical propositions lose their validity based on their weakest connections.  The image, of course, is clear and meaningful, for we count on chains to work whether they are in our cars, on our fences, or part of our toilets. The Tell Tale Rag, written by G.W. Henry in 1861 speaks of a thousand-link chain that lifts us to heaven, and how having only one weak link will lead to its failure.  It sits as a powerful call to attend to detail and more importantly, that focusing on one’s strengths alone is a problem.

And we urge you, beloved, to admonish the idlers, encourage the fainthearted, help the weak, be patient with all of them.

It is interesting that the NIV uses the word “warn,” while the NRSV uses “admonish.”  The Message uses the phrase "gently encourage."  Such are the subtleties involved when translating a 2000 year old document. The tone of the verse appears to be even more clear with the less ambiguous phrase “be patient with everyone.” And while the tone of “you are the weakest link, goodbye” from the TV-show was undoubtedly harsh, the Bible verse recognizes that, while some are weaker than others and could cost all, the approach needn't be unkind. Rather than getting rid of our weakest link, the plan is to care for our weakest link.  Endless people get credit for saying something to the effect of "the true test of a civilization is how it cares for its most vulnerable members."  In every case, I could not find an actual date, time, place or publication other than the dedication of the Hubert H. Humphrey Building, in Washington DC on November 1, 1977, Humphrey said,

In social network theory, the term "weak link" has taken on different connotations. A "strong link" represents our social connections that are regular and committed. A "weak link" represents more tenuous relations — acquaintances, friends of friends, people we know to see but do not really "know". We often count on our strong link connections for help and support in times of trouble. We share values, group loyalty and common understandings. We cultivate our strong links. Our weak links however are valuable by virtue of being weak. These are people who know people we do not know. While we may not be able to count on them, they can often introduce us to people we have not met, connect us with resources we did not know about. They are opportunities for learning for transformation and change.

William F Rushby left a comment for Olivia Brangan
"Welcome to QQ, Olivia!  I would like to know more about you and your connection with Friends."
7 hours ago