Review of Meetings, A Religious Autobiography by Chuck Fager

from Amazon's website:
"Chuck Fager’s transition from a conservative Catholic, pro-military youth to an active peace witness and a lengthy period of “spiritual formation” among progressive Quakers...a special religious coming of age in the mid-1970s...in a continuing time of tumult and change."

"The result is both a compelling story of our time, and the narrative of a unique personal quest for meaning, transcendence, and a useful life." 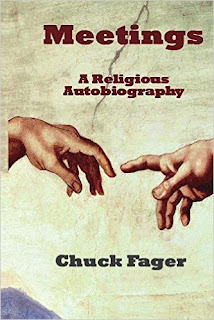 I've finished the book. Chuck does deliver some intriguing stories from his life as he promised. Kudos for that.

And at times, stories of his intellectual quest do come through clearly. His account of professor Milton Mayer of the University of Chicago is powerful and moving.

Furthermore, Chucks recounting of those radical days of the late 60's and early 70's, and his involvement, will bring back many memories of that best of times, worst of times.

But overall this book appears to be at first-read weaker than some of his other books. Unlike those, this one seems fragmentary, more of a starting outline. There are key stories like wall pegs; now hang deep personal reflections on them.

Yes, the book has up appealing and shocking stories, but Chuck doesn't show how they relate to his interior life, doesn't put them in the context of his personal life, and doesn't reflect on them in relationship to his spiritual belief and life.

The reader feels unconnected and is filled with many questions unanswered.

For instance, there is the fascinating story of his discovering a missal like the ones of his childhood.

But after the very detailed nuanced narrative of how he comes across the book at the Saint Vincent de Paul thrift store, he just leaves the aged ritual book stuck on a shelf in a plastic bag. 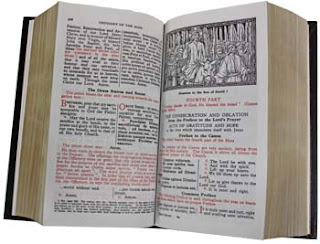 We don't know how he felt and thought about religious ritual, and Catholic ritual especially, about how filled with superstition it seems, about it relationship to Church history, about cannon law, about hell and purgatory in relationship to himself and all humans.

This is so unlike his recent posts on the same sexuality controversy in North Carolina Yearly Meeting, where even in those brief blog posts, Chuck ferrets out the motives, reasonings, etc. of the not-so Friendly leaders in that tribulation, that ocean of darkness.

Here's another particular example of a disconnected story from Chuck's book:
Suddenly, half way through his autobiography, we learn that his wife, Tish, has a severe drinking problem, and he moves out. Then he speaks of his own "sin."

We readers didn't even know he had met a girl, gotten married, had a kid, developed relationship problems, etc.

We have no idea about his views of sexuality.

Or how his wife developed her alcoholism, and why they couldn't work this out.

Meetings is a short autobiography so Chuck didn't have time or space to go into great detail, but a short 2-page lead-in on his youth and girls, his views on sexuality, and his life relating to women was very necessary.

All of those aspects are very important in understanding the sudden split, of his moving out to a friend's.

And how did he meet Tish, and their marriage?
Was it a Roman Catholic wedding?
Was she a practicing Catholic?
What were their views in birth control?

And most importantly: What are his reflections of how his spiritual and religious experience relates to his sexuality and marriage?

Then there is a girlfriend, called Sylvia. Again, we have no idea who, why, when or how this relates to his religious life.

Even more importantly, he fails to reflect on all of this and other unexplained vague statements about "sin."

And he mentions having sex after his wife and him split? Does he mean he engaged in fornication?

Does he go to confession? Or not? Why or why not?

At another point in the book, Chuck states that his class ring, "the red and gold band" is much more important than his wedding rings!!

He wrote that the ring took on "much more important" meanings.

Again, as a reader, I am left confused.

We readers don't need lots of private details, but we do need to understand--to feel and experience and think what he did.

I don't expect an autobiographical writer to completely bare his soul or his very private life, but without some details, some description, and extensive inner reflection, the reader is left confused and unmoved.

If Chuck does a revision--
I did about 7 on one of my book after its first edition--
he needs to keep in mind the old very truism of writing:
Show, don't tell.

And in a religious autobiography, REFLECT on your motives, your inner directions, your shadow, and how all parts of your life relate to the spiritual.

And Chuck needs to remember that in many cases, he didn't even tell.

He's right, "any religion that's worth it is built around stories."

And he ought to have added, any religion that's worth it reflects on its stories.

Posted by Daniel Wilcox at 7:43 AM No comments: Links to this post