Eat Food Without a Face

Eat Food Without a Face

Moving Toward No Harm Eating*

"Eat food without a face."

What a marvelous aphorism with a powerful ethical kick. 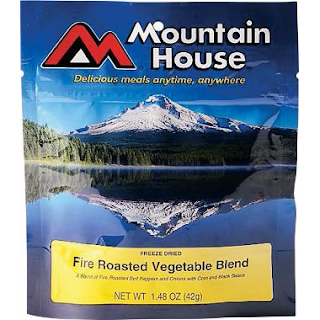 This is an update on my own move down the food chain, transitioning toward vegetarianism gradually. Second time around.

The first time I tried to de-meat was in 1968 near Philadelphia, PA, while working as a mental health care giver in a mental hospital for emotionally disturbed teens and children.

(That came about because I was a conscientious objector; when drafted for opposing the Vietnam War, I served my country and all others by helping at-risk kids.)

I tried to go strictly vegan, but lost 50 pounds, became malnourished, dropped down to 113 pounds, damaging my brain and body and my relationships with others!

Such a good worthy ideal, but for me it was the wrong way to get there. Despite my modeling my diet on a 6-Gold-Medalist Olympian’s, my own particular body constitution couldn't take the drastic switch, even with the help of a health food doctor. Strict veganism worked for Murray Rose and the doctor, but not me.

Fast forward to the 1990’s; I started my new attempt by stopping the eating of all beef. At first, I missed hamburger and beef bologna. And sometimes declining all beef at family meals was relatively difficult. At first, my relatives and friends offered to get me salmon for their meal. I accepted or only ate potatoes and veggies. However, later, for who knows why, they stopped offering the alternative.

But I stuck to my fork, not my gun.

Keep in mind my family grew up in Nebraska, the "Beef State."* Every year when I was a kid, my parents bought half a cow from our grandparents and we ate everything from steak to heart, liver, tongue and ox tail! My favorite meat was fried liver and onions, and second, large beef bologna. 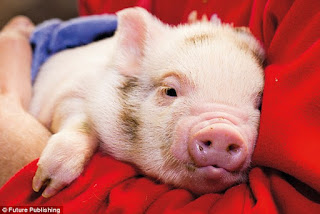 As for pig, I’ve never been a hog for pork, so didn’t have to stop chewing on such oinking dishes,
since, basically, I've eaten very few pork products since childhood.

When the family reunion of Thanksgiving
came up, I simply passed on the ham, and ate a little fowl food instead.

But even if I had loved ham and pork loins, I would have, definitely, stopped because pigs are one of the smartest sentient animals. Not a creature to eat.

See this:
'We have shown that pigs share a number of cognitive capacities with other highly intelligent species such as dogs, chimpanzees, elephants, dolphins, and even humans..."

"The point is not to rank these animals but to re-educate people about who they are.
They are very sophisticated animals," said neuroscientist Lori Marino of Emory University.

"Science leaders have reached a critical consensus:
Humans are not the only conscious beings;
other animals, specifically mammals and birds, are indeed conscious, too."

"The Cambridge Declaration on Consciousness in Non-Human Animals was publicly proclaimed in Cambridge, UK, on July 7, 2012, at the conclusion of the Conference, at Churchill College, University of Cambridge, by Philip Low, David Edelman and Christof Koch...
The Declaration was signed by the conference participants that very evening, in the presence of Stephen Hawking, in the Balfour Room at the Hotel du Vin in Cambridge, UK. The signing ceremony was memorialized by CBS 60 Minutes.”
--Marc Bekoff, PhD and other writers
https://www.psychologytoday.com/blog/animal-emotions/201208/scienti...


However, despite my jettisoning of beef and pork years ago, I am moving slowly into vegetarianism this time around (compared to 1968), and don't plan on trying to achieve a vegan diet in my life time.

For the past decade or so, I have been a fishetarian, and I hope to become a lacto-vegetarian with in several years.

I am opposed to animal suffering. But I do need to emphasize, again, I am not fundamentalistic or rigid about this ethical choice/moral outlook toward food and human beings.

I certainly don't think that some animals are more important than some humans like plant biologist Peter Singer's incredible claim.

Also, while I personally oppose the eating of intelligent sentient "face" creatures as food, especially cattle and pigs, I don’t protest, like PETA leaders do, nor do I lecture others about their own eating habits and choices.

While I don't eat ham or beef, when I am with relatives and they only serve fowl food, so as not to offend, I either pile my plate high with potatoes and veggies or I take a small portion of fowl food.

I do this rather rather than play huge "Waldo" at the dining table and hurt my host's feelings.

But on my own, I drink non-fat milk for protein, and eat cheese vegetarian dishes, and various types of seafood, including clam chowder, crab, and fish, especially Alaskan salmon.

Currently, I am working on eliminating bird fetus (eggs) from my diet.

My personal goal is to finally reach the ethical life where I eat only non-face food, where I don’t eat any conscious sentient creature, not even fowl or gill meals, none at all. 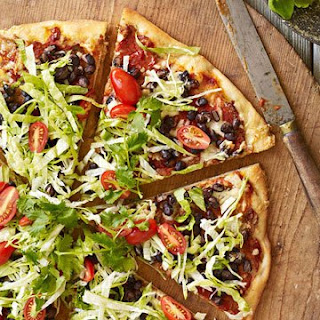 So far moving toward the ideal, is going well.

Considering my age (almost 70), and despite my ill health, I'm doing pretty good. I’ve not lost 50 pounds this time.

And I am probably much healthier than I would be if I still ate beef and pork.

At least my doctor always smiles and congratulates me for not eating red meat. (She says, ‘Now, Daniel, if I could just get you to stop eating those little white doughnuts in the middle of the night because of your insomnia.’)


My general hope is that eventually all humans will move to a harmless/no-harm/no-face food life. 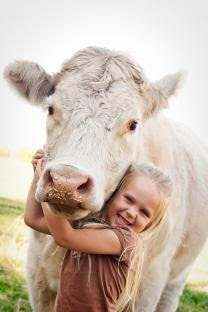 Another point for moving toward non-meat products is that generally non-meat sustenance is better for all humanity and for the environment. Check out some of the various sources on the Internet or the library on that.

What is your view of eating?

What is your favorite food?

Do you think all humans ought to move toward face-less, no-harm food?

If so, which do you support vegetarianism or veganism?


For readers interested in my many-post book I am writing, here's the low-up;-):

*The Nature of Reality

Point #1: Bottom Up
Subpoint A: Choices
Subpoint B: Ethics and Human Rights
Subpoint C: Creativity and the Openness of the Future
Subpoint D: Inherent Worth of Every Human Being
Subpoint E. Altruism and Non-violence (Attacked…)
Subpoint F: Worth of All Other Sentient Creatures
Fa: Eat Food Without a Face

"Nebraskans have been blessed (or cursed) with various nicknames including "Bug Eaters," "Tree Planters," and "Cornhuskers." Nebraska has had two official state names: "The Tree Planter State" (1895), and "The Cornhusker State" (1945-present).

Apparently the earliest nickname applied to Nebraska residents was "Squatters," according to a July 21, 1860, article in the Omaha Weekly Nebraskian. ...many early Nebraska settlers moved onto their claims before the land had been surveyed..other state nicknames of that era were arguably worse...South Carolina Weasels, the Illinois Suckers, the Alabama Lizards, the Georgia Buzzards, the Missouri Pukes, or the Mississippi Tadpoles...'

By the later years of the nineteenth century, "Bug Eaters" had replaced "Squatters" as the Nebraska nickname...probably originated during the grasshopper invasions of the 1870s."
http://www.nebraskahistory.org/publish/publicat/timeline/nicknames_...

Posted by Daniel Wilcox at 9:26 AM No comments: Links to this post

I enjoyed your post.  Your journey is similar to mine and we are close in age (I'm 65).  About a year ago Baltimore Yearly Meeting's Right Relationship with Animals committee asked me to participate in a video series in order to share my journey.  Hope you enjoy it:  Carry Your Sword as Long as You Can (click the title to view it on YouTube)

Theodore Schmidkonz left a comment for Услуги адвокатов
"I would like to communicate with you.My email address is:thschmidkonz@yahoo.com That is me to the…"
4th day (Wed)