As some of the older people in my Meeting would have said, "Perhaps the message was not addressed to [me]."

For a beginning, he's misread what Jesus was talking about and misinterpreted the purpose of the young man's question. Later on, he gets caught in a misleading dichotomy between someone's idea of liberal individualism vs someone's idea of community authority; the truth is seldom anywhere near a dichotomy, neither on an end nor in the middle, but simply somewhere else. He seems to end up hoping that "capitalism" (wherever _that_ might be found!) may be a loose enough system to leave more room for following Christ -- another great confusion of irrelevancies and what transcends all that... stuff. It isn't that some people think too much; but quantity is never a substitute for quality. Theology should never be abandoned to theologians, 'armchair' or any other sort -- but no doubt God forgives us our efforts.

Thanks for the question. It looks to me to be another example of someone intelligently missing the point -- but right now I don't have time to finish it; my wife likes me to rest her eyes by reading to her before we meditate. More later, I hope, after I'm done reading & digesting...

Thanks for your comments Keith.  It's not either / or right?

Some brands of Quaker want to invent institutions as an expression of their faith, whereas others wish God's native intelligence to shine through, leaving it more to the Spirit to do the Self organizing.

The latter approach appears more anarchic from the outside, but the actual participants may appreciate a certain Good Order of Friends nevertheless.

There should be room enough for these various brands of practice.  Quakers are already all over the map in terms of how they present themselves.

I urge you to describe this news item briefly, and provide the URL for other QQ members to read the article.

Keith:  Thanks for calling this to my attention.  I don't believe it's right to have an "edifice complex" but, on the other hand, demolishing that piece of Quaker history and area history strikes me as being unnecessary and very sad. Sue Hewes, from the Poplar Ridge Meeting, was in our college Young Friends Fellowship.

Thanks for the report.  I can certainly see how being involved in the discussions on QuakerQuaker would be a distraction.  I look forward to having the fruit of your labor in the Light available.

Keith, I miss hearing from you.  I suspect my computer has lost contact with yours, again.  The last thing I have on your page is, "Thanks Forrest and Diane. I really needed that. :-)"  Hope the connection comes back, again,  soon.  It just came back apparently spontaneously last time.

Keith, no I’m not a member, though, I’m continually experimenting with Light and have the good fortune to gather regularly with people who are also doing so.  Not all have come to the practice through Quakerism; some wound up checking us out through reading about Friends and stayed because they found what they were looking for.  Because of our lack of interest in the outward forms, we are an enigma to the yearly meeting.  The people now constituting the local meeting have brought it to a new place.

In reading Rogers two letters to Fox I seem to be getting a glimmer of what you’re referring to.  I feel his groaning as he wrestles with how things came to this point. Particularly that Fox had moved on from the message of the Light in their conscience available to move and guide them to needing outward forms to structure them.  And desiring with all his heart for Fox to say his intentions were being misrepresented by his followers.  Also, the pain of having Fox not answer him directly, but continuing to accuse Rogers of having left his first love and then Fox not responding at all.

Keith, I agree with your assessment of the nature of Wilkinson’s spirit and Fox’s in their letters.  Even Wilkinson’s conciliatory tone isn’t keeping me from wearying of the abundance of words being sent back and forth.  I’m not feeling Presence speaking through them.

Gathering together for communion with Presence and going forth in Presence to care for the widows and orphans, feed the hungry, give water to the thirsty and visit those in prison is what energizes me.

I would be interested in hearing what you think of Rex Ambler's “Experiment with Light.”  Are you familiar with it?  The web address is http://www.experiment-with-light.org.uk/.

Amos refers to a longer piece on Fox's meaning, by George Benson:

This also helps clarify what Fox had in mind. Again, I don't entirely agree; but then I can't entirely agree with Fox's understanding of matters -- except for his sense that it is the same Spirit at work, regardless of our differences in apprehending it.

Much as I disagree with George Amos about a number of things, I think he clarifies the meaning of 'answer that of God in everyone excellently in this post: https://postmodernquaker.wordpress.com/2011/07/20/answering-that-of-god/

Briefly: to endorse and support ~'the Spirit which is imprisoned' in everyone. In Keith Saylor's terminology, their recognition and reliance on 'the Presence [of God]' within them for guidance and protection (of what matters) in all things --something which most people  remain so-far unable to do, much of the time.

And hence that Spirit, intended to ultimately reign within us, remains imprisoned meanwhile by people's various fears, desires, opinions, habits and prejudices. (But continues patiently accomplishing its purposes despite apparent obstacles and setbacks.)

'To minister to that Spirit' would mean, to Fox, 'to support a person's compliance with the demands of conscience (which he woud expect to stem from the influence of the same Spirit, hence to be the same demands, in everyone.)

The idea of anyone being, not 'a liar', but simply mistaken, or seeing from another perspective, seems to be largely inconceivable to the religious worthies of that time... or that, at least, was my impression from a small dose of their pamphlet wars [like very slow internet flame wars, yes?]

But is everything you and others are posting coming through on my end?

My conscience has received that we are to answer that of God in every one, yet Rogers seems to be answering that of men; sayings and pronouncements that his conscience hadn’t received as from God.  My perception is that Rogers was being drawn out of the Light by a need to defend the conviction that no one should rule over another’s conscience.  Self defense can be as alluring as self exaltation.

Keith, as I read Christian-Quaker I can’t help but wonder if the cause of grounding consciences in Presence might have been better served by using various ways of preaching that message with deeds and words.  If I’m not mistaken, the kind of disputation used in the book was a common pastime in England at that time so it was natural for Rogers to use it.

Hmmm...I see no postings since the 21st.  Have I lost connection again?

I do intend to stick with reading because I want to experience fellowship with those of that period.  That does require allowing Presence to bring the past into the present.  I am aware that it takes time to become familiar with language styles that differ from mine.   Since each part appears to deal with different aspects, I will probably do some sampling of the parts rather than reading straight through.  It’s definitely a playful process.

Yes, I have been struck by the use of “jealous” and “jealousy.”  I can’t say that I have much of a feel of their sense of it, yet.

Keith, I’m laboring away reading William Roger’s “Christian-Quaker.”  The use of the English language is unfamiliar to me and being a facsimile of something done on a printing press of the day makes it difficult to read.

That in just twenty years Fox and those who had been convinced had gone from proclaiming a revelation of direct access to God to denying that revelation by expecting people to submit to what others had received from God because it was perceived that unity was to be found in uniformity is amazing. The way the controversy was handled is fascinating.

It feels like Truth is being defended.  My sense is that Truth only needs to be spoken and lived.  Defending it is a diversion that entices people to avoid Truth and start dueling with defenses.

Bummer!  I ordered the wrong book.  When I went into Amazon today I found the right one but haven't ordered it yet.

Keith, I did order the book this morning.  I look forward to reading it and sharing thoughts with you.

Yes, Keith, I did receive this.  It's all I've received since you suggested I refresh my browser.  I can't even find any blog posts from you when I go into the blogs from the main QuakerQuaker website.  My grandson, who's way more computer savvy than me, couldn't figure out what's going on.  Maybe if I add you as a friend I will receive things other than just what's posted on my wall.

I found the quote very interesting.  I see that Amazon has has a copy that seems to be of the original. 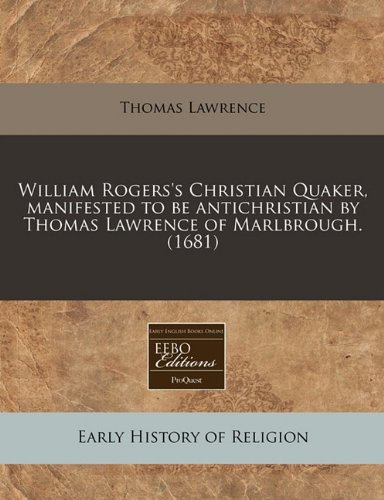 Is this what you have?  If it is I'll probably order a copy.

As for refreshing the browser, the computer has been rebutted several times during the last 5 weeks.