What should I do?

I had a dream a few days ago, one of those rare wholly unambiguous dreams. It was a flying dream, but that’s not the relevant feature, just a plot device. 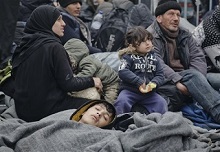 I was returning home to an upper floor of a six-story apartment building. Flying over the roof, I saw that the whole surface was filled with sleeping refugees. As I came down toward the building entrance I saw that all the yard and parking lot space was also crowded with refugee families.

As I entered, several men asked me what I was going to do to help their families and neighbors. I made no excuses, but I acknowledged that, even if I sold everything and liquidated my bank accounts, I could only feed some of the many people for a few days. Then we would all remain together in the same destitution.

Knowing is overwhelming. Every day, more stories of slaughter and flight from slaughter. Every day, more encounters with street people, immigrants, and other hurting, marginalized neighbors. And every day, more evidence of siege mentality1 on the part of a public and political world on guard against the call of empathy.

My dream is not about this larger reaction against empathy but about my own. All beings avoid pain, and the most subversive version of this the attempt to avoid the pain of feeling the pain of others. We rush for “solutions” that will mask that empathetic pain—whether or not our actions really “help.” My dream challenges me to sit with my own pain of witnessing pain.

This morning in my stream-of-consciousness journal I received the following opening:

You don’t have to know what to do next. In fact, you can’t. Trying to discern it is work that gets in the way of seeing it. Pay attention to the need, not the solution. Pay attention to how you feel about knowing of the need. Really settle into it.

What you are doing is exploring those inward defenses which stand in the way of your truly engaging with the person in need. So long as you avoid direct experience of your own conflicting feelings, those feelings are barriers to being truly open to the other person.

One…interesting social-political-psychological phenomenon [is the shared misperception] of being under siege, i.e., feeling as if the rest of the world has highly negative intentions towards one’s own society or that one’s own society is surrounded by a hostile world…. “Negative intentions” refer to the desire and motivation of the world to inflict harm or to hurt the society, so that they imply a threat to the society’s well being.

Image of migrants on the northern Greek border from “As Europe struggles for a unified approach to the refugee crisis, t...,” on AccessWDUN (3/7/2016).

Migrants wait by the border gate between Greece and Macedonia at the northern Greek border station of Idomeni, Monday, March 7, 2016. Greek police officials say Macedonian authorities have imposed further restrictions on refugees trying to cross the border, saying only those from cities they consider to be at war can enter as up to 14,000 people are trapped in Idomeni, while another 6,000-7,000 are being housed in refugee camps around the region. (AP Photo/Vadim Ghirda)

“Forgiveness,” by Carlos Latuff [Copyrighted free use], via Wikimedia Commons.

William F Rushby replied to William F Rushby's discussion 'Quaker Without a Meeting: A Response to Jason'
"Mark, thanks for your comment!  Of late, I have found myself as an isolated Quaker Christian,…"
1 hour ago

Peter S. Krynski replied to Mike Shell's discussion '“On Mediation” by Mary Klein'
"Love the article and the portrait of Jacob Nayler, titled The Great Deceiver, the False Messiah,…"
yesterday

Listening, prophecy and reconciliation: allyship in a climate emergencyJoin us for a week of…See More
1st month 13
0 Comments 0 Likes

Matthew Callow commented at the end of his discourse on liberal British Quakerism: "It often feels…See More
1st month 12
0 Comments 1 Like