We will remember them all... 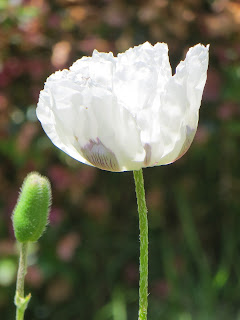 Photo source: Pixabay
We will remember them all... 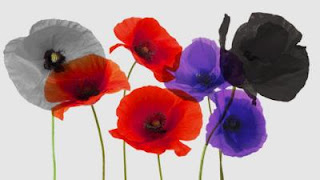 Four types of poppies photo source: Newsround
"We came across a lad from A company. He was ripped open from his shoulder to his waist by shrapnel and lying in a pool of blood. When we got to him, he said: 'Shoot me'. He was beyond human help and, before we could draw a revolver, he was dead. And the final word he uttered was 'Mother.' I remember that lad in particular. It's an image that has haunted me all my life, seared into my mind."
~ Harry Patch ~
Harry Patch was the last surviving soldier of the First World War. He died on July 25 2009 at age 111.
“War isn’t worth one life,” Patch said, it is “calculated and condoned slaughter of human beings.” In his autobiography Patch wrote that “politicians who took us to war should have been given the guns and told to settle their differences themselves, instead of organising nothing better than legalised mass murder.”
Masters of War
"Come you masters of war
You that build the big guns
You that build the death planes
You that build all the bombs
You that hide behind walls
You that hide behind desks
I just want you to know
I can see through your masks
You that never done nothin'
But build to destroy
You play with my world
Like it's your little toy
You put a gun in my hand
And you hide from my eyes
And you turn and run farther
When the fast bullets fly
Like Judas of old
You lie and deceive
A world war can be won
You want me to believe
But I see through your eyes
And I see through your brain
Like I see through the water
That runs down my drain
You fasten all the triggers
For the others to fire
Then you set back and watch
When the death count gets higher
You hide in your mansion'
As young people's blood
Flows out of their bodies
And is buried in the mud
You've thrown the worst fear
That can ever be hurled
Fear to bring children
Into the world...
How much do I know
To talk out of turn
You might say that I'm young
You might say I'm unlearned...
Let me ask you one question
Is your money that good
Will it buy you forgiveness
Do you think that it could
I think you will find
When your death takes its toll
All the money you made
Will never buy back your soul"
~ Bob Dylan~
"The soldier above all others prays for peace, for it is the soldier who must suffer and bear the deepest wounds and scars of war."
~ Douglas MacArthur ~
"If there is in the affairs of mortal men any one thing which it is proper uniformly to discredit, and which it is incumbent on every man, by every lawful means, to avoid, to deprecate, and to oppose, that one thing is doubtless war.  There is nothing more unnaturally wicked, more productive of misery, more extensively destructive, more obstinate in mischief, or more unworthy of man as formed by nature, much more of man professing Christianity."
~ Erasmus ~
"War has ravaged whole districts; even in these late times the dogs of war are not yet muzzled. Oh! what shall we do to put an end to war? Mars, where is the chain that shall bind thee like Prometheus, to the rock? How shall we imprison thee for ever, thou cruel Moloch; how shall we for ever chain thee? Behold here is the great chain, that which one day is to bind the great serpent; it has the blood-red links of love. The gospel of Jesus Christ the crucified one, shall yet hush the clarion of war, and break the battle-bow in sunder."
~ C H Spurgeon (1858) ~
Previously published on Devotion.

Kirby Urner commented on Olaf Radicke's blog post 'It's time for quakerquaker.org to move to Mastodon'
"Yeah I'm on Mastodon through being a Subgenius (as well as Quaker).  It's a fine…"
22 hours ago