Called a "rural seer" by the New York Times in 1991, Kathleen Stocking left Michigan's Leelanau Peninsula, took her powers of perception on the road, taught in the prisons and homeless shelters of California, taught in a scary private school in El Salvador, managed two tours in the Peace Corps, traveled, discovered a world increasingly without borders due to the Internet, and finally came home exhausted, burned out and is currently finishing a book called, "Global Field Guide" about what she saw.

When dolphins wash up on shore in significant numbers, we suspect there’s something happening wrong in the ocean. It’s just not what we expect.  It’s not a natural phenomenon.  We may not know what it is exactly, but we guess that, whatever’s happening, however unknown or unknowable to us, it’s got to be about more than dolphins simply taking a notion.

Why don’t we have the same common sense intuition about the children at the border? 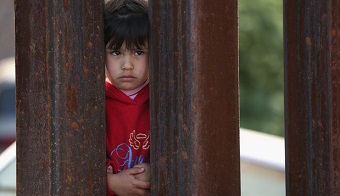