It was a smaller affair, which may have sharpened the lens of perspective. So often, we tumbled out of the house, food in hand, kids in tow and arrived a few minutes late for Thanksgiving at my parents'. This year, we were ahead of schedule with the exception of my husband driving back a half hour later to pick up our 15-year-old after her outfit was out of the dryer.

Mine were the only children: my nieces grown up and onto their own lives, my out-of-town sister making the trip at Christmas.

And yet, my mother had polished the silver, laid out the family china, cooked a turkey, made two kinds of dressing (one gluten free just for me), boiled the potatoes and arranged appetizers ... all the while on oxygen. She struggled with the long, green snake trailing her for 50 feet as she flowed between the dining room and kitchen. She was most concerned someone else would trip. 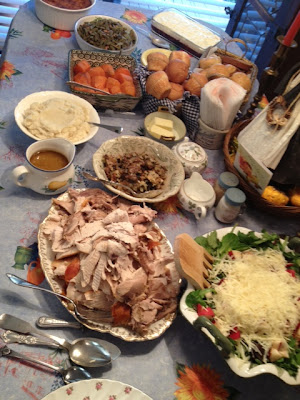 Just last week, as I was out of town on a trip planned for months, she, my father and twin sister traipsed to the Cleveland Clinic to get more definitive answers on what, specifically, could be done for her two weakened heart valves. Essentially, she was told they'd have to get her lung pressure down before they could do anything invasive, hence the full-time oxygen. I remember when she came home from a long hospital stay this summer and talked her primary-care doc out of the full-time air. He made her take a healthy walk without and agreed she could cut the day-time cord. I also remember her, two days home, green snake in hand, riding her stationery bicycle: I want to get in as good a shape as I can, she said at the time. She was sick of having been in a hospital bed for 10 days.

Wednesday evening as my mother and I were making last-minute food decisions, we talked about her cardiologist appointment earlier in the day. She said that doc calculated she'd be having her heart surgery in a few months. How's that? I asked because it didn't seem to square with what she heard in Cleveland. Oh, she said, we misinterpreted the surgery risk. What we'd thought was risk of survival, which looked pretty low, was risk of failure!

When I discussed this yesterday with my sister, she had not misunderstood the risk as we had, but it wasn't good enough yet for Cleveland.

If anybody can beat those odds I know it's my mom. She never ceases to amaze me with her positive attitude, hard-work ethic, sense of humor and deep faith that she is where God wants her.

We've had some pretty amazing talks about death lately, a subject that I welcome because it is so little spoken about. Hasn't hurt that I worked in the funeral industry a few years. Turns out neither of us, my mother or me, is afraid of what comes after life. It occurs to me that we have been heavily influenced by my mom's baby sister who died of breast cancer, but with such a rare and glowing grace that you could palpably feel God's touch. You just knew she wasn't alone.

That comforts me as I know my mom's time is limited here, as it is for all of us.

• Who have been my examples of faith?

• What lessons have those encounters imparted?

• What are my feelings about death?

• In general? For someone I love? For myself?

• How can I witness God's presence even in death?

from the fridge to the

tail lest it trip

and she in ours,

this day a fond

Having been resuscitated from a heart attack, I found death itself very pleasant.  The heart attack part not so much.  But I have sat with a friend dying from cancer and that took much longer than the heart attack.  I believe a peaceful and/or quick death is a gift from God.  I have never felt as peaceful and loved as I did after I died even though it only lasted for a few short seconds before they zapped me back.

How wonderful is it that you shared this as confirmation/affirmation. I am so appreciative that you stumbled here and opened yourself. I will be certain to al tell my mother, as it will mean so much to her as well. Blessings on your journey!

Flo Fflach replied to Jonathan Pilgrim's discussion 'Cyber meetings'
"I have only worshipped online since March 15th 2020 - except on 2 occasions. I would say yes it can…"
5th day (Thu)

Donn Weinholtz commented on Donn Weinholtz's blog post 'No Title'
"Final Thoughts:  Putting It All Together “It took me a…"
5th day (Thu)