Mary Mills is a retired teacher of French and German at County Prep High School in Jersey City, N.J., and a former member of Woodstown (N.J.) Meeting. She has served as a Mandel Teacher Fellow of the United States Holocaust Memorial Museum in Washington, D.C.

In the April 2003 issue of Friends Journal (24-28), she published “German Quakers and the Trial of George Grosz,” an introduction to and translation of the 1930 deposition by Hans Albrecht (Clerk of German Yearly Meeting, 1927-1947) which contributed to the acquittal of the Expressionist artist on blasphemy charges. 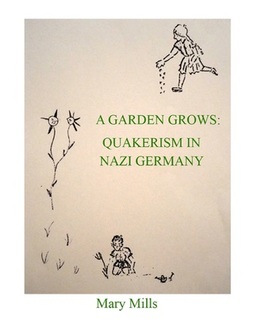 Friend Mary has now published A Garden Grows: Quakerism in Nazi Germany, available from Amazon and Smashwords through the Quaker Universalist Fellowship Bookstore.

Hans Albrecht was a driving force behind the efforts of German Quakers to assist those persecuted by the Nazi government. In her introduction, Mary writes:

In this book, I provide a translation of Albrecht’s perceptions of Quakerism. I have also translated The Little Gardeners Album, a journal written by the "Little Gardeners” a group of students at Quaker School Eerde. The drawings throughout my translation are from the Album.

I think the Album may be viewed as a practical application of some of the ideas discussed by Albrecht in “The Concept of Community” and “The Essence of Encounters”. It is also an historical document that provides an insight into the reaction of children, educated in a nurturing environment, to war.

In a new November post, "Recovering History: Hans Albrecht & the Quakers of Nazi Germany," Mary tells how she became aware of that witness.

I encourage Friends to join Mary Mills in her recovery of German and international Quaker history from the Nazi era.

Thanks very much, David.

I agree with you about the Russian and Polish exterminations, and certainly about the destruction of the Native Americans.

Sad, sad irony for the latter group: anthropologists and epidemiologists now believe that the population of the Americas before 1492 amounted to as much as 20% of the population of the whole planet.  Before the Europeans ever knew that there were nations of people in North America, around 90% of them had been killed by plagues brought from Europe and carried inland.

I would like to invite more discussion here of the core concerns of this post: namely, the efforts of Hans Albrecht and the German Quakers to speak truth to power in Nazi Germany.

Albrecht was very explicit (as you can see in the essays which Mary Mills has translated in A Garden Grows: Quakerism in Nazi Germany) that Quakerism in that place and time meant public action.

Later, in a essay in 1956, "The Essence of Encounters" (see A Garden Grows), Albrecht shares examples of his public witness on the "Negro question" with racist friends.

The modern Quaker movement in Germany began in response to the unexpected post-World War I relief actions in Germany of British and Americans. German Friends, in turn, saw it as their duty to act publicly in the face of the danger of brutal persecution under the Nazis.

How can the experiences of the German Quakers then inform our faith and practice now?

Hi Mike. Will you share your thoughts on whether Albrecht's efforts, i.e. his public actions, altered the behavior of the powers to which he spoke truth? Did his efforts encourage further persecution and statist imposition over individuals and groups? What were the practical results of his public actions?

A primary questions raised for me pertain to the present - what genocides are happening now, or could be on the horizon?  What kind of hatred or discrimination is present in our own society are we called to respond to?

The current condition of life for Native Americans is one concern I have, also increasing poverty.  In my experience, poverty is violent in and of itself and leads to an increase in violence related to crime and domestic violence.

I applaud AFSC's initiative on extended solitary confinement as torture, and the issue of mass incarceration (related to poverty from my information).

We have endemic violence against people in our society because of gender, sexual orientation or and/or race.

We have many issues to be adding our voices and labors to, all of them involving children as well as adults.

What can we learn from Hans Albrecht, the German Quakers and the children of Eerde?  For me, it is important to speak up and take action on at least one, or as many as I can manage, of the issues in present time, and to do this as a part of my faith community.  United we have a larger presence.

My thanks to Mary Mills for her long and dedicated work to make these works available to us.

Will you share your thoughts on whether Albrecht's efforts, i.e. his public actions, altered the behavior of the powers to which he spoke truth? Did his efforts encourage further persecution and statist imposition over individuals and groups? What were the practical results of his public actions?

I doubt that German Quaker actions had a positive effect on the Nazi regime.

I do not know whether their actions aggravated persecutions...except that Friends and others who stood up publicly lost jobs, property and, sometimes, lives.

The German Quakers took a brave public stand and personally intervened to protect targets of Nazi persecution. By doing so, they opened the way for other Germans to reexamine their compliance with the regime. They were joined by folks of other faith traditions (Bonhoeffer, for example) in putting their lives forward.

This is what the first Quakers did in 17th century England under Cromwell's Commonwealth and then under the Restoration of Charles II, without knowing if they would ever have an effect on the government.

My sense is that the driving motive Quaker faith in action is always this:

Robert Cowper replied to William F Rushby's discussion 'Rut, Rot or Revival: The Condition of the Church. by A.W. Tozer'
"Some evangelicals are open to things. It is schisms as is case for any religions…"
yesterday