I was asked by a Catholic friend if I knew Benjamin Lay, the Quaker abolitionist. I did not. She gave me an article1 in the September 2017 issue of the Smithsonian magazine, “The Cave Dwelling Vegan Who Took on Quaker Slavery and Won,” by Marcus Rediker.

I of course know of John Woolman, almost revered by many Friends including myself, but why had I never heard of Benjamin Lay? Indeed, Lay’s portrait, painted by William Williams in 1790, is in the National Portrait Gallery in Washington DC. 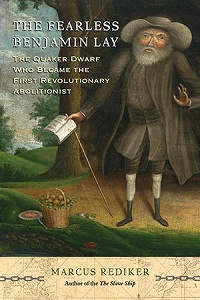 Marcus Rediker, a non-Quaker historian, writer, teacher, and activist for peace, social justice, and global death penalty abolition, has drawn upon his expertise in slavery for his new book, The Fearless Benjamin Lay: The Quaker Dwarf Who Became the First Revolutionary Abolitionist.

Once I read the Smithsonian article, I recalled that Larry Ingle had reviewed this book for Friends Journal on September 1, 2017. Ingle writes: “Should readers choose to read this compelling biography—and those who see this review are hereby forewarned not to deny that experience….” I had read the review but did not get the book until my friend sent me the Smithsonian article.

This book for me was a “page turner.”

Lay, born to a Quaker family in England, was a dwarf and hunchback, a little over four feet tall with a normal sized head. In England he objected publicly to some vocal ministry during worship as “preaching their own words not God’s truth.” This led to conflict with the Meetings he attended, and he was disowned from two meetings.

He worked as a glover and sailor and then moved to Barbados, where he was horrified at the treatment of slaves, also witnessed during his sailor experience. He married Sarah Smith, also a dwarf, and they eventually moved to Philadelphia, where Lay began his opposition to slavery in earnest. He frequently appeared at worship to challenge the slave owners. In 1738, he appeared at a session of Philadelphia Yearly Meeting, rising to address the gathered Friends, berating their holding of slaves. He thundered, “Thus shall God shed the blood of those persons who enslave their fellow creatures.”

He then opened his coat where hidden was a sword and a hollowed out book filled with a pouch of red poke berry juice. He took the sword and punctured the book as the red juice flowed over some of those assembled.

All Slave-Keepers That Keep the Innocent in Bondage, Apostates


In 1737, Lay wrote a book, . The Quaker Overseers refused to publish it, but Benjamin Franklin did that same year. After the publication, the Overseers condemned the book and disowned Lay.2

Most Quakers were slave owners at that time. Rediker’s book concentrates on four leaders of Philadelphia Yearly Meeting, describing their considerable wealth in today’s dollars as multimillionaires.

Sarah died after seventeen year of marriage, and Benjamin then moved a few miles from Philadelphia. He built his own home in a large cave, grew his own fruits and vegetables, ate vegetarian, and lived very simply. When he died at age 77, Quakers had given up slave trading but still had slaves.

Thomas Slaughter, who wrote The Beautiful Soul of John Woolman, Apostle of Abolition (Hill and Wang, 2008), writes in his first sentence that Woolman “was a founding father of the international movement to abolish slavery and one of its most effective advocates.” Woolman, 38 years younger than Lay, apparently never mentioned Lay in his writing, although he certainly must have heard of him and possibly had met him.

Slaughter states that Lay was likely a slave holder during his brief two-year stay in Barbados, but this is not borne out in Rediker’s biography. Slaughter said of Lay: “His contributions were rage and a complete absence of Quaker gentility, which he considered an expression of the sect’s hypocrisy.” (115) He does include Lay’s picture and a quote from his book (116-117). Woolman was sixteen when the book was published in 1738.

Slaughter says Lay was a “Disowned exile assaulting Quaker ‘hypocrisy’ from the outside.” Rediker portrays Lay as a committed Quaker who loved and was devoted to his faith, even though disowned. Slaughter does say in his “Epilogue” that Woolman was not the first Quaker abolitionist (383). Rediker calls Lay the “first revolutionary abolitionist,” and goes further to say he wanted a new way of life without animal and human exploitation.

Why had I not heard of Benjamin Lay in my nearly fifty-year association with Quakers? He clearly is not nearly as well known as John Woolman. His public criticism of some vocal ministry would not be welcome today and was not then. Most of us are likely not comfortable with his confrontational and theatrical approach.

However, Jesus was also at times confrontational. He drove out those who were buying and selling in the temple, and overturned the tables of the money changers. He called some people “hypocrites.”

My thoughts also wandered to the civil rights movement and the sit-ins, disruptions, marches and demonstrations. Some clergy in Birmingham counseled patience and negotiations. Martin Luther King, Jr., was arrested and responded with his Letter from the Birmingham Jail, justifying the disruptions and agitation.3

I wonder if we do not like Lay’s confrontational theatrics and his blunt spoken and written condemnation of slavery, a predominant wrong of his day, because if he were alive today he might use the same methods against our complicity with today’s militarism, our materialism, and our own wealth.

1 The title of the online version of this article is “The ‘Quaker Comet’ Was the Greatest Abolitionist You’ve Never Heard Of,” Smithsonian, September 2017.

2 All Slave-Keepers That keep the Innocent in Bondage, Apostates, published by Benjamin Franklin for its author in Philadelphia in 1737.

Image: “All Slave-Keepers That keep the Innocent in Bondage, Apostates, by ...,” in the Library of Congress Exhibitions, The African American Odyssey: A Quest for Full Citizenship – Anti-Slavery Activists.

3 Letter from the Birmingham Jail (16 April 1963). The link is to an annotated version in the King Institute Encyclopedia of Stanford University. The annotation was done by Michael Wilson as part of his honors thesis research at Stanford.

Listening, prophecy and reconciliation: allyship in a climate emergencyJoin us for a week of…See More
2nd day (Mon)
0 Comments 0 Likes

Matthew Callow commented at the end of his discourse on liberal British Quakerism: "It often feels…See More
1st day (Sun)
0 Comments 1 Like

Mackenzie replied to Kirby Urner's discussion 'Is Semite Really a Synonym for Jewish?'
"In the context of the word "antisemite," yes, it definitely is a synonym for Jewish. My…"
1st month 7

"https://youtu.be/hAt8-_9ApnI I see Conservative Friends in the US have a school - wonder if it has…"
1st month 7