Some may dispute this label "mystics" correctly applies, as if to them, why not to Bucky Fuller, who likewise meditated on the machine-like qualities of human existence.  When it comes to machine learning by means of neural nets, no AI can hold a candle to what one brain can do, let alone many working in tandem, in parallel.

I read on Medium that it's OK for me not to decode AI anymore, likewise CIA which some say should be AIC (Artificial Intelligence Central).  No wait, I'm wrong.  Here's the very short list of technology acronyms I don’t need to define: API, AJAX, BIOS, CPU, CSS, HTML, HTTPS, LAN, RAM, REST, USB, WWW, XML.  For everything else, I should spell it out.

AI = "Artificial Intelligence" in that case.

Anyway, Bucky worked closely with Ed Applewhite, a career CIA guy, retired by the time we met, who gave us the four volume Synergetics Dictionary, and in there, we maybe find a distancing from the "mystical" as what to spend time on:

I consider all the time spent on speculation regarding the inherently unanswerable as inherently profitless and a squandering of the opportunity to answer those questions which are inherently answerable by man.

I supposed he's taking "mystic" as somewhat akin to "obfuscator" and he preferred to be clear, about what little he knew about.  He also said "I spend every waking moment in a world of absolute mystery."

Lets agree the word "mystic" ("mystics" plural) is malleable as to its meaning and precisely to whom it applies.

My mom, Carol Urner, has tended to embrace the term as suggestive of what drives her, which many an orthodox Christian would simply call "the voice of God" (or "the Will").

However in Huxley's Perennial Philosophy, studied by many Quakers I know, the mystics frequently come off as outside the jurisdiction of any orthodoxy, as their role in their own time is to challenge some established status quo.  St. Francis of Assisi would count in that category.

No one commanded we establish a strict taxonomy in any case. I will point out, that after Fuller self-published 4D Timelock, a book on solutions for sheltering people, he had a short list of people he felt should have access to it right away, and P.D. Ouspensky was on that list.

Fuller was effusive in his admiration for Einstein and referred to peaceful uses of nuclear power (such as in the sun) in Nine Chains to the Moon.

So was Einstein a mystic? He's a source of quotes such as this one:


The most beautiful and profound emotion we can experience is the sensation of the mystical. It is the sower of all true science. He to whom this emotion is a stranger, who can no longer wonder and stand rapt in awe, is good as dead.

Wittgenstein  might question whether the mystical must really be an emotion or sensation (let alone a brain process).  Was Wittgenstein a mystic?  Obviously, we could go on and on with such queries.

Maurice is what some might call a Jungian in his outlook, a link to Gnosticism and Gnostic, which rhymes with Mysticism and myth-making.

The machine and the mechanical, and its relationship to life, is the stuff of myth as well, a source of stories.  Psychology and philosophy meet here somewhere.  We have just the one Universe after all. 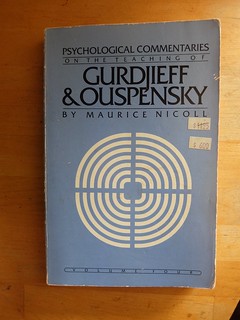 William F Rushby commented on William F Rushby's blog post 'From John Woolman on Ministry'
"In my younger years, I tried to get Quaker sociologists to turn the spotlight on their own faith…"
6th day (Fri)

Kirby Urner replied to Kirby Urner's discussion 'Connecting Quakers and Sufis (ongoing project)'
"Hi Marcia.  Yes, the Sufi Gulenists as one might call them (are Quakers Foxists?) have or have…"
6th day (Fri)