Is Religion Motivated by Guilt Trip? 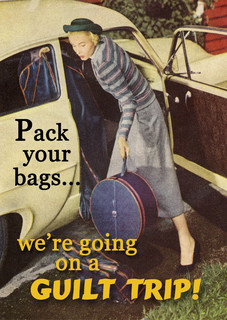 The cynic rejects organized religion because of the perceived damage it creates to the believer. The atheist believes in no higher power, no higher authority. The atheist may observe nothing, but the cynic observes everything.

Certain biblical narratives in the life of Jesus could be said to invoke guilt to enforce belief. Matthew 23 speaks harshly to the keeper of God’s word, the scribes and the Pharisees. In modern parlance, we might deem the entire chapter and all forty verses as one extended rant. It is unclear whether this message should apply to the common person, but its inclusion in the text has been variously applied to everyone over the centuries.

Jesus’ anger builds to a fiery crescendo, a warning of apocalypse and eternal damnation. Like Sinners in the Hands of an Angry God, the punishment is vocal and descriptive.

“You snakes! You brood of vipers! How will you escape being condemned to hell? Therefore I am sending you prophets and sages and teachers. Some of them you will kill and crucify; others you will flog in your synagogues and pursue from town to town. And so upon you will come all the righteous blood that has been shed on earth, from the blood of righteous Abel to the blood of Zechariah son of Berekiah, whom you murdered between the temple and the altar. Truly I tell you, all this will come on this generation.

Should we fall to our knees in terror? Some of us will take these words as an admonishment to avoid hypocrisy in their own lives, but others will think the punishment too harsh. How we take the message depends on our conception of obedience to God. More individualistic faiths downplay this passage. The response of Liberal Friends and self-identified liberals might well be: Who are you to tell me what to believe?

A healthy skepticism is often a good thing. Converts to Quakerism are routinely attracted to a faith where no person speaks for everyone. Yet, I find many more have never quite gotten over their childhood scoldings by frustrated parents. Some have never outgrown their rebellious adolescence and early adult life.

The definition of guilt depends, of course, on context and on the individual. The words of Jesus or any authoritative voice can be by turns threatening, gently admonishing, and even constructive. Where we are along life’s journey and our internal responses to external stimulus dictate what we hear and what we ignore. For me, there are times where I don’t want to be reminded of the times I let my basic selfishness overtake my best intentions. I’m doing the best I can, I might protest.

Is it guilt that makes me claim I am being falsely accused or unjustly persecuted? I better get right with God, or I know where I’m going. Or, at least, that’s what some believe. I never was much of a believer in the benefit of hellfire and damnation. Liberal faiths discard the above scriptural passage altogether or downplay the venom.

One day Jesus said to his disciples, "There will always be temptations to sin, but what sorrow awaits the person who does the tempting! It would be better to be thrown into the sea with a millstone hung around your neck than to cause one of these little ones to fall into sin.”

As I’ve noted before a time or two, Abraham Lincoln used this passage to great effect in his second Inaugural Address. In that context, he was addressing a destructive fratricidal war that tore not only a country apart, but the Religious Society of Friends. We may not have recovered from the strife and discord yet.

Guilt has its place, but not when it exists only to make someone else miserable. That approach isn’t corrective. It’s childish. If we consider ourselves Christians, we seek to be made in Jesus’ image, not to be chronically unhappy. Everyone knows a person who has been wounded by faith perverted, by the pettiness of human failure. Quakerism promises a freedom from the unhelpful and unnecessary, not the end of life lessons for right living. This is where some go wrong, very wrong.

Living the life requires that we keep our spiritual muscles supple. We only gain strength through exertion and constant focus. Protesting unfair treatment or largely imagined grievances weakens us. As we are forgiven, so we should forgive ourselves and begin again. The idealist in us wants to believe in the concept of adulthood as a goal to be reached, an apex to be scaled. In reality, maturity is often what people run from, not run towards.

I write to you today with no guilty conscience. My demons are inside me, not in a smoldering cauldron or, as we are taught, cast into a herd of pigs. Who am I to tell you what to do? May you be in a receptive mindframe, neither defensive nor reactive, ready to practice active listening. If a little healthy guilt trip now and again works for you, so be it. I wouldn’t live my life in fear of always doing something wrong. Doesn’t that interfere with our freedom of choice?