What is it we all fear? We fear what our culture—or, rather, whatever part of our culture we pay attention to—tells us to fear.

At the moment we are all afraid. All of us. On whatever part of the spectrum of belief we stand, there is nothing else in the pubic conversation right now except fear. Some of us express that fear as anger or resentment—or hope—but fear is the taste of this age.

And it’s all based, to put it bluntly, on what “sells newspapers”—on what distracts us, out-weighing what is real in our personal lives with what we are supposed to feel afraid of. In The Strange Order of Things: Life, Feeling, and the Making of Cultures (2015), neurobiology of consciousness researcher Antonio Damasio writes this about the evolution from bacteria to nucleated cells to multi-cellular organisms:

This long process of evolution and growth is full of examples of powerful cooperations, although accounts of this history usually give pride of place to competition. For example, bacterial cells cooperate with other cells so as to create the organelles of more complex cells…. Technically speaking, some of our own cells began by incorporating bacteria in their structure….

The principle is always the same: organisms give up something in exchange for something that other organisms can give them…. [What they] give up, in general, is independence; what they get in return is access to the “commons,” the goods that come from a cooperative arrangement in terms of indispensable nutrients or favorable general conditions, such as access to oxygen or advantages if climate. (54-55)

Douglas Abrams, co-author with the Dalai Lama and Archbishop Desmond Tutu of The Book of Joy: Lasting Happiness in a Changing World (2016), tells of Richard Davidson’s neuroimaging research into what Abram calls a “unified theory of the happy brain."

There are four independent brain circuits that influence our lasting well-being, Davidson explained. The first is “our ability to maintain positive states….”

The second circuit is responsible for “our ability to recover from negative states.” What was most fascinating to me was that these circuits were totally independent. One could be good at maintaining positive states but easily fall into an abyss of a negative state from which one had a hard time recovering….

The third circuit, also independent but essential to the others, is “our ability to focus and avoid mind-wandering.” This of course was the circuit that so much of meditation exists to develop. Whether it was focusing on one’s breath, or a mantra, or the analytic meditation that the Dalai Lama did each morning, this ability to focus one’s attention was fundamental.

The fourth and final circuit is “our ability to be generous.” That was amazing to me: that we had an entire brain circuit, one of four, devoted to generosity. It is no wonder that our brains feel so good when we help others or are helped by others, or even witness others being helped…. There was strong and compelling research that we come factory equipped for cooperation, compassion, and generosity. (56-57)

We depend on the other in order for us to be fully who we are…. [The concept of Ubuntu] says: A person is a person through other persons.

Ubuntu says when I have a small piece of bread, it is for my benefit that I share it with you. Because, after all, none of us came into the world on our own. We needed two people to bring us into the world….

And you realize that in a very real sense we’re meant for a very profound complementarity. It is the nature of things. You don’t have to be a believer in anything.

Unfortunately, in our world we tend to be blind to our connection until times of great disaster. We find we start caring about people…we’ve never met…. And yet we pour out our hearts. We give resources to help them because we realize that we are bound up together. We are bound up and can be human only together. (60) 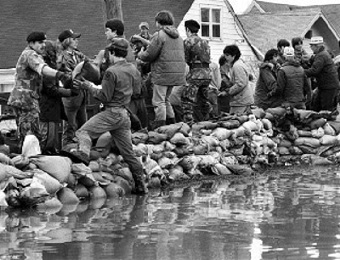 So what should we do? Set aside fear. I don’t say deny fear or genuine reasons for fear. I say, set fear aside.

Instead, look to your neighbors and show them something more important, more blessed, to give their cooperation to.