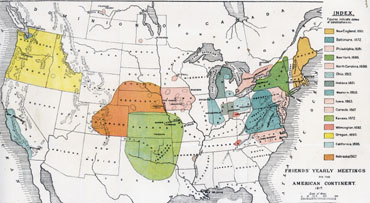 Since I've been living up on the East Coast, I've noticed a decided difference in the way Quakers prioritize their focus and time. Within Monthly Meetings of a certain region, Quaker history is often deified. This is true in Philadelphia and also in other locations where Friends have long been present. But this isn't the case everywhere. The Deep South Meeting in which I became Convinced was more interested in the present tense than the past. They did an excellent job of building community and tending to regular attenders.

Quaker history, however, was largely consigned to the familiar picture of  Hicks' Peaceable Kingdom. Here and there, on occasion, group discussion touched briefly upon the major figures in the Religious Society of Friends, but more as a point of reference. We were too busy considering other weighty topics to stop there for long. We spent, I recall, a full three months discussing the history of nonviolence, but with little mention of George Fox, William Penn, James Nayler, or any other famous Friend that might come to mind.

Earlier in my life, I attended Methodist service. The Methodists spoke a little about their own founders, John and Charles Wesley, and their tireless evangelizing. In Sunday school, we learned the basics, as we largely glanced past most of the rest. One had to sign up for classes to learn more about the history of the faith, and none of these sessions were offered with much in the way of enthusiasm. Participation was never especially active and was probably limited to the same few retired couples who came to almost everything, and the long-standing members who felt guilty for not taking part.

The church I attended did not place much of a priority upon what we would call adult religious education. Any discussion group or class proposed seemed to have a thin layer of dust covering it.  Because no one stressed the importance of Methodist history, I remained almost entirely ignorant of it. The adults around me never talked about it in much detail. Even as a child, I remember wondering if they knew any more than I did.

I was, instead, schooled to live for another Sunday morning. Taking my familiar place on the pew, I sang the Doxology at the same part of the service as I did every week. No one ever explained why and I never saw any need to question. As a young child, I was periodically fitted with a black robe and solemnly lit the candles on the altar. At the appropriate time during the service, I dispensed shiny brass collection plates to the congregation, so that they might contribute their financial gifts to the church.

Slightly outside the sanctuary were baskets filled with a daily devotional guide entitled The Upper Room. These were largely ignored by almost everyone, but out of guilt, people did occasionally buy a copy or two. They were tributes to good intentions, but I found them exceptionally boring to plow through from front to back. I could not apply the information these pamphlets contained to my own life. Eventually, my reaction to this religious literature characterized my entire feelings about Methodism, and I left.

When I became a Friend, I felt a little as if I'd landed in the middle of a historian's conference. Learning the faces and major events of Quakerism was not difficult for me. I'd been trained to one day eventually teach history to legions of largely disinterested college freshman. Anything I've found interesting or any group to which I have formed a strong allegiance ensures that I will soak in pertinent details with great relish. That has long been a personal strength.

There must have been some reason for this strong emphasis upon our roots. Were we afraid that our past efforts might be whitewashed away by hostile religious groups? After all, we do sign our names at the conclusion of a Friends wedding, certifying by our presence that a joyful event has taken place and cannot be denied. Were we fearful that ritual in any form might eviscerate the importance of our Elders?

From my own experiences, it seems that churches and houses of worship fall too heavily upon either one area or the other. They over-stress their history, or come down too heavily on worship and community. Integrating these three is the sign of a healthy gathering, one that is fully attuned with the Light. It displays a reverence for what came before and an understanding that tending one's flock of is of similar importance. In liberal unprogrammed Quakerism, a discomfort with Scripture leads some to use Quaker history as a substitute authority. While I understand the desire, this practice borders dangerously upon Idolatry.

But again, I question. Why the focus upon history? I've encountered my fair share of card-carrying Quakers who have a savant's understanding of terminology and an encyclopedic knowledge of the publication history of an otherwise obscure Friend. In no other religious group have I found this attitude and while I am never opposed to a healthy understanding of the past, I do question the motives behind it.

If we do wish to keep in touch with what came before, we don't need to resort to half-measures. My Meeting almost expects that Friends will learn pertinent information without prompting. Some of us are that highly motivated, but many of us need a guide to focus our attention. Recommending a pertinent book to read or text to use as ballast is a good start, but if we imply that Friends ought to become an authority on all Friendly subjects, we'll need to blow away the cobwebs and start teaching.

Theodore Schmidkonz left a comment for Услуги адвокатов
"I would like to communicate with you.My email address is:thschmidkonz@yahoo.com That is me to the…"
yesterday