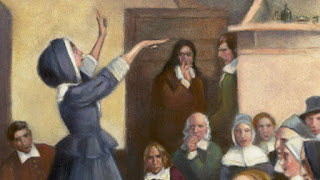 This was my reply to a post in Friendly Letter about recorded ministry.  Many think Friends don't have ministers but that's a modern development. We used to have them.  They weren't pastors but they did serve the meeting. The meeting had authority over them, rather than they over the meeting. They were servant-leaders to use a modern term.  But now Friends think we never had them, that they represent hierarchy (false), that they think they're better than the rest (judgment), that we don't need them (have you seen our decline in worship attendance?).  Early Quaker worship was dynamic because of the silence and the incredible preaching.  It almost died out nationally if it weren't for the revival movement breathing life into many pockets of Quakerism.  If it weren't for Rufus Jones and his emphasis on mysticism, liberal Quakers would have probably moved to a pastoral form of worship.  But we didn't. Today, most of our meeting houses are empty.  The preaching, if it exists, is more like group therapy, a process group, intellectual sharing, or worse, to quote the late John Punshon, Daffodil ministry. On my way to meeting I saw the daffodils, and it made me think of . . . . . or  I was listening to NPR on my way to meeting this morning and I heard ________ and it made me think ___________.  Intellectual. Heady.

We. need. to. nurture. gifts. in ministry.  And if meetings won't do it, it's time to open up the doors to unused meeting houses, and create meetings that will allow a diversity of people, men, women, people of color, LGBTQI Friends to exercise their gifts and not keep the stagnant status-quo through the façade of "equality." #startnewmeetings

I don't think LiberalFriendists gravitate to Liberal meetings because of Rufus Jones; the blurry belief-system simply suits the people it suits. Others, naturally enough, find nothing there and drift off.

You ran afoul of a length-limit here, but could have posted it all as Part 1, 2, etc.

God is not a metaphor; but what people say and think about God necessarily takes that form. You can't readily point to a reality that incarnates everywhere; metaphor is the language we fall back on when pointing fails.

Maybe that's the problem you find with "Theology"? A different choice of words can leave people arguing about phenomena they actually agree on; use of the same terminology can hide differences in interpretation. Only poets are fit to handle theology; and we never manage to fit ItAll into words.

Wake-up words only annoy determined sleepers. God continues to work on them; I'm wrong to be so impatient with that process!

Olaf Radicke commented on Olaf Radicke's blog post 'It's time for quakerquaker.org to move to Mastodon'
"An helpful how to about following hashtags: http://www.youtube.com/watch?v=QCRb4qEbUPo"
3rd day (Tue)