Daughters of Light: A Review 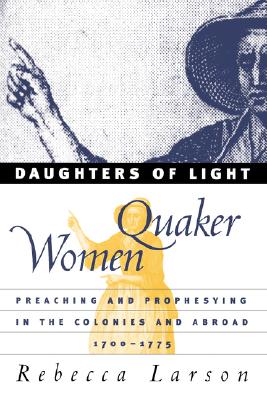 In the spring of this year I met up with several young women who were actively involved in Washington, DC, print media circles. Arriving early for the gathering, as I often do, I took my seat at a table and began to converse with a person sitting next to me. During the course of our talk, I mentioned that I was a Quaker.

Surprised, she exclaimed “I’ve never met a Quaker before!” Overhearing our conversation, a middle-aged woman sitting one table over said, “Did someone mention Quakers? I'm a Friend.”

With a wry smile on my face, I turned to the person I’d been speaking to first and said, “See, now you’ve met two!”

I enjoy telling that story because it emphasizes that allies are often present in forms and avenues we might never before have even thought to consider. As it stands, The Religious Society of Friends, commonly known as Quakers were hundreds of years ahead of the curve regarding women’s rights and gender equality. It is for this reason that I’ve been reading Rebecca Larson’s fascinating book, Daughters of Light.


I enjoy telling that story because it emphasizes that allies are often present in forms and avenues we might never before have even thought to consider. As it stands, The Religious Society of Friends, commonly known as Quakers, were hundreds of years ahead of the curve regarding women’s rights and gender equality. It is for this reason that I’ve been reading Rebecca Larson’s fascinating book, Daughters of Light.

In particular, the work talks about the crusading women in the 1700’s who followed a powerful sense of Divine direction to become active, respected ministers. I’ve been amazed to discover how progressive were certain strongly held beliefs among Friends, some of which were as much as three hundred years ahead of their time. It seems obscene that the lives of these groundbreaking women and what they accomplished should be consigned to obscurity.

Nowadays, many Christian denominations have, after much delay, ordained women. In the United States, certain denominations still retain male-only clergy while others have allowed women to serve in this capacity. But it’s only been within the past fifty years that this degree of willingness to accept the contributions of women has been present. Perhaps one can now understand how radical and subversive a belief it was three centuries ago to assert that women’s leadership and active participation in worship was equal to that of men. This daring belief openly defied the Patriarchal norms of the day.

A devotion to the leading of the Inward Light was considered of paramount importance to man-made systems, laws, and customs. It was for that reason that Quakerism appeared threatening to many in England, particularly so to the established Church of England and the English government. Unlike almost every single other denomination within Christendom, female ministers were given equal weight to that of men. Following a zealous desire and Divine instruction to spread God’s message across the British Isles and the American colonies, these women traveled constantly, delivering vocal ministry from meeting to meeting. The Society centered on the basis of an egalitarian premise, one which eschewed ordained and professional clergy, eliminating the middle man, and in so doing not depriving the right of each Friend to speak his or her mind.

Underscoring the threat Quakers posed to others, justified or not, I am reminded of a particularly amusing anecdote. It concerns an Anglican clergyman, who took up his quill to write, warning families, friends, and fellow churchgoers to refuse to allow women to travel to Pennsylvania, else they be converted to Quakerism. Even worse, once in Pennsylvania, these deluded souls could become Ministers! As he phrased it, being a member of that cursed group was akin to infection with some contagious disease. Paternalism and with it a desire to shelter women from themselves goes back a very long way indeed. How easy it is to justify controlling someone else’s right to freedom of choice under the self-serving premise of protection. We still see it today.

Since a calling to ministry was considered more important than anything else, female ministers usually delayed marriage until they felt that traveling and spreading the Word had been adequately fulfilled. Some women married well into their thirties, in a time where most women married in their late teens, and sometimes earlier than that. A precedent against societal norms regarding marriage began with George Fox, the founder of the faith, when he married active minister Margaret Fell (The Mother of Quakerism).

Despite the fact that at age fifty-five Fell was ten years his senior and had eight children by her first husband, Fox registered no reservations. He justified the union by stating that it was spiritually based, not purely for the purpose of procreation. Following his example, two other male ministers around the same time married older female preachers, setting a precedent whereby when considering marriage, age was largely unimportant, and seeking assistance (helpsmeet) to live a religious life was valued more highly in a relationship partner.

The societal expectations of how women were to keep home and hearth were different as well. Regarding the subject of motherhood, in particular, 17th Century women in general were expected to primarily be managers of the estate more than central figures in child rearing. This is in direct contrast to how we think of the hands-on role common today. Each individual meeting helped determine the arrangements necessary to perform household tasks, since a minster could be expected to undertake long periods of absence from home. Quakers of this period had developed particular strategies over time, still expecting that they would also endure long periods of incarceration for being open with their faith. In the beginning, a generation before, extended time in jail was usually the order of the day.

The Church of England saw Friends as heretical and the government found them a unwelcome challenge to the established order. This degree of intolerance expedited the move of Friends to North America, particularly to Pennsylvania, where the Quaker William Penn was given a massive land grant by the Crown, seeking to establish a colony there based on Friendly principles.

Daughters of Light does fall a bit on the academic side, but not terribly so. I have only one real reservation with the text itself. It doesn’t provide something important I’d like very much to know. Growing in a world more sexist and more misogynist than exists today, what distinguished Quaker men of the period from their brethren? Did they deliberately ignore the contradictory messages of the society around them? Did they deliberately condition themselves to block out notions that could have easily prevented them from thinking of women as equals?

If neither of those questions are helpful, are there simply men of a particular persuasion who don’t buy into condescending beliefs that proclaim male superiority? Feminist discussion focuses often on how to best override institutionalized attitudes of inequality. I wonder now if some men are more susceptible to them than others and, if so, what can be done to recognize these signs.