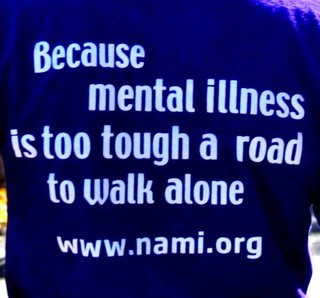 Today, I meet with a representative of NAMI, the National Alliance on Mental Illness. The nature of my visit is to see what resources they, as an organization, can share with us, the Meeting. A previously established program of theirs exists to educate houses of worship on these sorts of issues. The unique particulars of unprogrammed Quaker Worship and our ways of doing things must first be taken into account. The existing curriculum will need to be modified.

In a nutshell, here lies the problem. A very vocal minority of our regular attenders and members suffer from severe mental illness. Often they refuse to take medication, despite the fact that seeking treatment would help them substantially. Due to their illness, they routinely act out in a multitude of ways, most of which we have learned to anticipate over the years.

One Friend is perpetually rude and turns Worship into a private soapbox. Another hijacked a committee meeting to harangue Friends about an entirely nonsensical concern. This Friend alternates between deference and respect to accusatory and confrontational behavior. A third refuses to bathe regularly, assuring that others will sit as far away from him as possible. These are only the worst offenders, the ones whose mental illness shows as plainly as an eye of the face.

In the midst of these are Friends whose behavior and general conduct is often erratic. Often, they have never sought formal diagnosis and treatment for reasons entirely their own. Instead, they suffer alone, and the rest of the Meeting takes silent count of their eccentricities and trigger points. The outgoing clerk of the committee I have recently taken under my care noted that, to her, "all Quakers are a little nuts." I'm not entirely sure I agree with her conclusions, but I do respect her insight.

These problems are not limited to one Quaker Meeting or one city on the map. The mentally ill continue to be some of the most stigmatized members of society. Often, they find the Religious Society of Friends out of a desperate desire to belong to and be accepted by anyone. Routinely, they are the most diligent in learning our terminology and ways of doing things, memorizing routine and the most arcane bits of procedure. They would be model Friends, if their periods of acute illness did not create friction and hostility among those with whom they worship.

My committee routinely oversees behavior problems, ones where the usual suspects are to blame. One fire is put out only to have a new blaze rage in its place. Quakers are uneasily confrontational in the best of circumstances. What is meant to be love, patience, and tolerance becomes instead enabling and co-dependent. Established stable and successful precedent, in this context, can be safely deemed an unqualified failure.

I want to educate the Meeting, to find healthier solutions for everyone, mentally ill or not. As I've disclosed several times publicly before, I have bipolar disorder. What has saved me from the same fate as the Friends I've pointed out earlier in this post is my willingness to seek medical help. I take nine different medications a day, and five of them are exclusively for psychiatric medical conditions. Though I experience a few hiccups here and there, I can carry on a largely normal life with only a few impediments standing in my way.

That is to say, I know the potential for greater health that exists. And, if I wish to pull up those painful memories, I know what it's like to be held at arm's length for being mentally ill. As I observe the vocal ministry and behavior of some Friends, I see a partially deformed image of the predominant cultural mindset staring back at me. They want to be activists, proclaiming the grave seriousness of their chosen cause. Mostly, they want to be heard and taken seriously, but their illness removes any veracity and authority they might have otherwise sought.

Action is what is needed now. We have hesitated long enough and if delay were sufficient in and of itself, we would have surely found a solution by now. We need to reexamine ourselves and our priorities. We have the means and the wherewithal, but we cannot justify or allow dysfunction any longer. We may not have created this mess, but we're the only ones who can clean it up.