A Review of Edwin L. Battistella's "Sorry About That: The Language of Public Apology"

Sorry About That: The Language of Public Apology, by Edwin L. Battistella (Oxford University Press, 2014).

Edwin L. Battistella’s book Sorry About That is a compilation and analysis of stories of pubic apologies in the primarily U.S. experience. Leaders everywhere make apologies, yet apology-phobia is a global disability. From the perspective given voice in this book, United States leaders have a particular problem with apology. 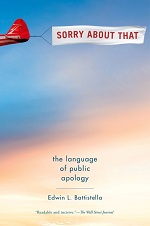 As a current example, reparations for slavery is a recent advocacy cause in the news, one that is highly controversial and unresolved. From this book it seems clear that there can be no reparations without an accompanying apology, and there can be no sound apology without reparations. But the author’s guidance indicates that public leaders are ill-equipped for this important task.

Reparations need apology for focus, while understanding and apology need reparations commensurate with the significance identified in the apology. There are weak slavery reparations proposals floating about in public discussion, ones that call for studies and partial funding programs for governments and private institutions. Currently, there is no comprehensive document outlining an apology and reparations.

The author of this book argues that a successful public apology has essential elements:

The book offers numerous examples of attempts at public apologies in U.S. history. Some were successful. Most were not. However, the mere collection of public apologies and their analysis in this book provide materials for building a universal norm and expectation for future pubic apologies.

For guidance in public apology, there is much to learn from the practice and experience of public apology in other cultures. A notable example is Japanese Emperor Akihito’s apology for World War II.1 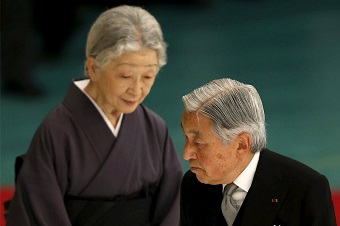 The title Sorry About That may cause some potential readers to dismiss this book as superficial. However, the book actually is one of only a few to address public apology in the history of the U.S. in a systematic manner. It is organized around actual historical occasions for public apology, each followed with analysis.

Battistella’s book and its bibliography are important resources for the process of identifying the essential elements of slavery reconciliation and the current issue of reparations for human slavery. The book includes an index, a bibliography, and an analytical guide to apologies with four situations for analysis (Exxon, BP, John Kerry, and Robert Kennedy), and a helpful table of contents.

Examples of past bad behavior by Quakers that merited apology include James Naylor, Native Americans, slavery, the 2008 financial crisis, 19th century eldering, and schisms among Quakers.

This book can be an important resource for Quakers generally, and particularly as Quakers participate in identifying and crafting a public apology for any reparation movement relating to slavery.