"Truth is not only violated by falsehood;

it may be equally outraged by silence."

I was asked to swear an oath at a public hearing last week. I declined and pointed out that Vermont law includes affirmation in legal proceedings where testimony is given. The chairperson acquiesced to my demand.

Not swearing oaths to be truthful is directly linked to Quaker history and George Fox. It was a hard won… 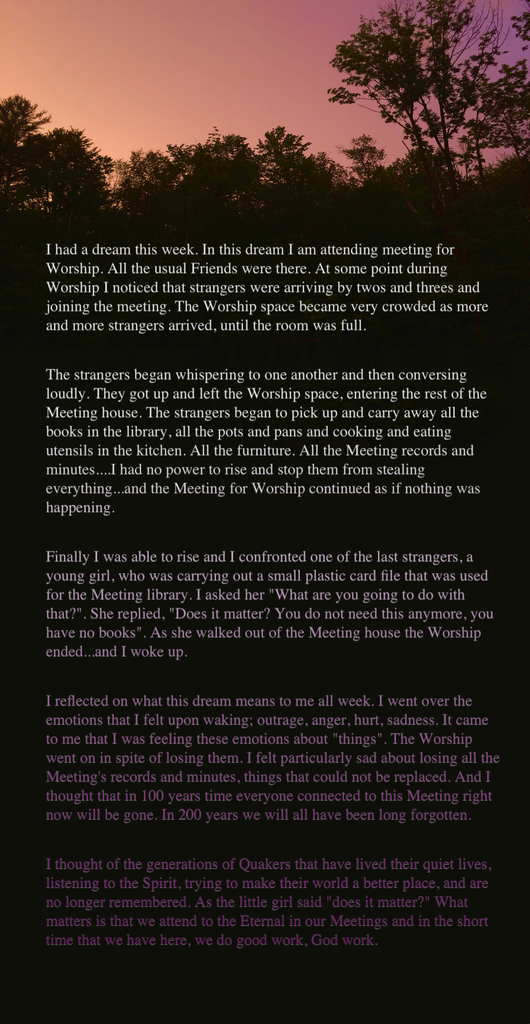 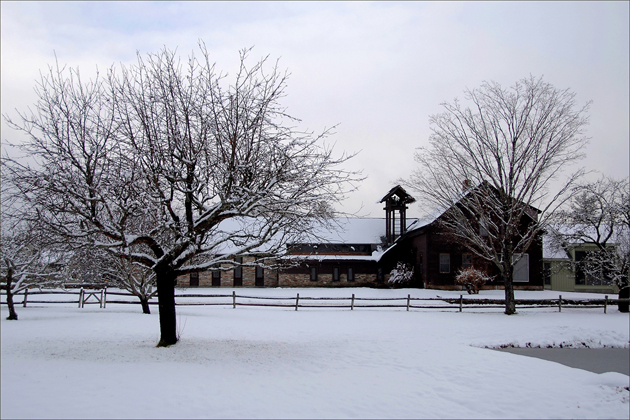 I am writing on behalf of our men's Quaker group that spent some time recently at the Weston Priory. We had a Spiritually nourishing time of worship, sharing, insight, and even a little poetry.

We appreciated having the time to work with…

Why Santa is a bad role model

“He know when you are sleeping, he knows when you’re awake. He knows if you’ve been bad or good”

These are familiar words from the song Santa Claus is Coming to  Town. On Christmas day I

The Quaker Meeting that I am a member of considers a query each month as part of our spiritual discipline. On the first Sunday of each month, we read queries during worship inviting those attending to reflect on an aspect of our lives.  In December the queries address Peace and Reconciliation. One of these queries prompted these thoughts on the use of…

We Quakers here in Putney Vermont arrived at Worship today to find that our “Black Lives Matter”sign in front of our Meeting house was stolen some time this week. To quote from our minute on Black Lives Matter; “What’s important for us is that it’s not just a sign, not just a statement, it’s a commitment to join with others in doing the work we need to do.”

The stealing of our sign by some unknown community member hurts, but it in no way lessens our…

A few days ago I woke up thinking about the word activist. What are they activating? Conscience, sympathy, compassion? Or how about outrage, anger, disgust? Activating action?

The other names that we use for this activity to promote change (or not) are interesting as well. Protester came to my mind first. Somewhat of a clunker because sometimes a…

“Shield me against my selfishness and my indifference to God and to my neighbor.”

~from the Novena to Saint Benedict

Early spring at the Weston Priory, a Benedictine monastery in Vermont, the monks garden is spare. You will note the bricks in the foreground with the message to “pray”.…

Let me set the stage; The Buddha is 12 feet tall and 12 feet in diameter, sitting cross-legged with fingertips and thumbs touching in it’s lap. It was carved from 11 pieces of wood and joined together. The room was 16 feet by 20 feet, with a 14 foot ceiling height, dimly lit by back-lighting. Other than the sculpture the only things in the room were two simple benches against the wall. It felt like a small temple.

I was spending the afternoon in the Rhode Island…

“Those of us who have grown up with a white identity in America have a particular challenge in that we have been conditioned not to notice the system of racism and white privilege. Our well intentioned attempts at color-blindness can have the unfortunate result of blinding us to the system of racism in which we unwittingly participate.”…

A person experiences life as
something separated from the rest -
a kind of optical delusion of consciousness.
Our task must be to free ourselves
from this self-imposed prison,
and through compassion,
to find the reality of Oneness.

Monk for a Day

A few weeks ago I spent a long weekend in retreat with some Friends at a Benedictine monastery here in Vermont called the Weston Priory. The monks live under the Rule of Saint Benedict which was written circa the year 500. The  motto of…

Sheila Garrett deconstructed the word responsiblity as part of her following note. I had never thought of this word in this way. It opens up possibilities for action in ways that you may not have thought of... both as individuals and as Faith groups.
Sheila is walking from Vermont to Georgia. You can follow her diary on…
Continue

OZ'S VOICE
Do you presume to criticize the Great Oz? You ungrateful creatures!

Think yourselves lucky that I'm giving you audience tomorrow, instead of twenty years from now. Oh -- oh oh!
The Great Oz has spoken! Oh -- Oh…

You are not your thoughts. This is something that is quite apparent to me while Worshiping or meditating. When you Worship silently or meditate the first thing you notice is that your mind is filled with distracting thoughts; things that you need to do, things that you have done, trains of thought running in every direction, your everyday stream of…

"This above all: to thine own self be true,
And it must follow, as the night the day,
Thou canst not then be false to any man."

“Some men look at constitutions with sanctimonious reverence and deem them like the arc of the covenant, too sacred to be touched. They ascribe to the men of the preceding age a wisdom more than human, and suppose what they did to be beyond amendment. I knew that age well; I belonged to it, and labored with it. It deserved well of its country. It was very like the present, but without the experience of the present; and…