The Greatest Among You Will Be Your Servant 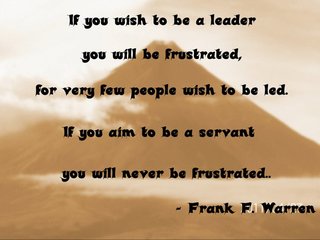 For several years I was a Unitarian Universalist. The church I attended saw itself as the hub of activism and artistic talent for the city of my upbringing. It was a dollop of highbrow culture in a Walmart, deep fried universe, and secondarily, a place for non-native liberals to congregate. Of course, I didn't recognize…

Daily Old Testament: Obadiah and My Own Article on "What DId I Say?" (Part 9)

There is just one chapter to this book. It contains a vision and a message from Yahweh concerning the land of Edom, the land Esau, Jacob’s brother, was given in the southern Dead Sea region and Jordan.

The message is addressed to Edom, which has become too proud: “I will cut you down to size among the nations; you will be greatly despised. You have been deceived by your own pride because you live in a rock fortress and make your…

A Wide View of Ministry: Way of the Spirit

Are you a faithful person who has trouble applying the word "ministry" to what you do? I wrote the SEEDS article linked below with a wide view of "ministry." That’s the core of the Way of the Spirit retreat-study program. Apply now for the January 16-19th retreat on spiritual discernment for Spirit-led ministry in the manner of Friends.…

Zechariah 13 – Some words here I fear have been taken too seriously – “I will also rid the country of the prophets, and of the spirit of impurity” (13:2). The prophets uttered too many lies to have enduring respect. It says in the note that the ancient prophets used to gash their bodies and scar them. Why? But they got too caught up in ignorance and false prophesy. There follows a messianic prophesy! God will “strike the shepherd so that the sheep may be scattered. . .turn my hand…

ESR Geraldine Leatherock Professor of Quaker Studies Stephen W. Angell delivered a version of this essay as a lecture for the Gathering of Adult Young Friends in Plainfield, Indiana, on November 8, 2013.…

Zechariah 11 – Fire and devastation will bring down the mighty trees of Lebanon and Bashan. There is an allegory here about bad shepherds; it isn’t easy to follow, and I’d by lying if I said I understood it completely. (11:7). The Prophet takes the shepherds’ staffs and names one of them “Favor” and the other “Union.” He breaks the staffs, showing that the Lord has “revoked the covenant . . . made with all the nations” (11:10). The Lord sends the prophet to “play the part of a…

Zechariah 9 – The prophet foresees doom on all the great cities of the region – Damascus, Hamath, Tyre, Sidon and the Philistine cities of Gaza and Ashdod. Those who survive will turn to the worship of Yahweh. “I will guard my Temple and protect it from invading armies” (9:8).

The people of Zion should rejoice! “Rejoice heart and soul, daughter of Zion. Shout with gladness, daughter of Jerusalem. See now, your king comes to you; he is victorious, he is triumphant,…

I love to feel where the words come from 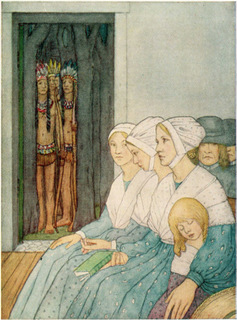 "I love to feel where the words come from."
These words were spoken to John Woolman as he was traveling during the…
Continue

Zechariah 6 – The eighth vision is four chariots emerging from between two mountains of bronze. The first chariot has red horses, the second has black horses, the third has white horses and the fourth has dappled-gray horses (6:1). The angel says they “are the four spirits of heaven who stand before the Lord of all the earth. They are going out to do his work” (6:5). The red ones are going to the East; the black ones to the North; the white ones to the West and the dappled to…

Daily Old Testament: Zechariah 5 and My Own Article on "What DId I Say?" (Part 4)

Zechariah 5 – The sixth vision is a flying scroll 20 cubits long and 10 cubits wide. It is the “curse sweeping across the face of the whole country” (5:3) banishing every thief and everyone who swears falsely.

Then the seventh vision – a bushel basket with a heavy lead cover. A woman in the basket represents wickedness. The angel forces her back in and puts the lead cover on it. Two women with “wings like a stork . . . picked up the basket and flew into the sky” (5:9).…

Introduction – This prophetic work originates in the same year as Haggai – two or three months after in 520 BC. Zechariah is a priest and a prophet, grandson of Iddo who was head of the priestly families returning from the exile. He is writing to encourage the returning remnant to repent and renew the relationship with Yahweh.

Zechariah 3 - In a fourth vision, the prophet sees a court of justice at heaven’s gate presided over by God.…

Introduction – This prophetic work originates in the same year as Haggai – two or three months after in 520 BC. Zechariah is a priest and a prophet, grandson of Iddo who was head of the priestly families returning from the exile. He is writing to encourage the returning remnant to repent and renew the relationship with Yahweh.

Zechariah 1 – “’Return to me and I will return to you, says the Lord of Heaven’s Armies.’ Don’t be like your ancestors who would…

Introduction: Haggai, another one of the twelve minor prophets, was active during the rebuilding of the second Temple. He began his ministry about 16 years after the return of the Jews to Jerusalem (c. 520 BC). The work on the Temple had been halted as a result of some conflict between the Samaritans and the Judeans, but thanks to prophets Haggai and Zechariah, the project got going again.

Daily Old Testament: Habakkuk 1-2 and My Own Article on "Continuing Revelation" (Part 7)

Eighth of the 12 minor prophets. The text was probably from the late 7th c. when the Chaldaeans [Hellenic term for Babylonians] were growing strong. The first two books are part of the Dead Sea Scrolls

Habakkuk 1 –“How long, O Lord, must I call for help? But you do not listen! ‘Violence is everywhere!’ I cry, but you do not come to save” (1:2). “I am surrounded by people who love to argue and fight. The law has…

Daily Old Testament: Zepahniah 1-3 and My Own Article on "Continuing Revelation" (Part 6)

Introduction: Zephaniah, one of the “minor prophets,” was the great-grandson of Hezekiah and lived during the time of Josiah (641-610 BC). He was a contemporary and supporter of Jeremiah and was active as a prophet during the reign of King Josiah (641-611). The two preceding kings – Amon and Manassah had introduced the cult of Baal and Astarte into the Holy City and Josiah wanted to put an end to it.

Daily Old Testament: Micah 6-7and My Own Article on "Continuing Revelation" (Part 5)

Micah 6 – The mountains and hills will be witness to Yahweh’s accusations against his people – the very foundations of the earth. God has given us so many blessings – how shall we return thanks? Sacrifices? Libations? First-born children? NO!! “What is good has been explained to you, man; this is what Yahweh asks of you: only this, to act justly, to love tenderly and to walk humbly with your God” (6:8).

Dear Friends, Many of you have heard the story: Two old Quaker farmers are working together, repairing a fence. One farmer pauses, looks up, and comments that among a flock of white sheep, he sees a black one. The other farmer looks up at the flock and replies, “Well yes, it…

Daily Old Testament: Micah 5 and My Own Article on "Continuing Revelation" (Part 4)

Micah 5 – The terrible weakness and frailty of Israel’s earthly kings is compared to the coming strength of the messianic ruler “[Y]ou, (Bethlehem) Ephrathah, the least of the clans . . .out of you will be born for me the one who is to rule over Israel. . .” (5:2). “The people of Israel will be abandoned to their enemies until the woman in labor gives birth” (5:3). Then the time will come when a new ruler of Israel will come and lead his fellow countrymen “with the Lord’s…

Research Notes: TGMOTGCharles Leslie on page 196 of his 1697 edition of The Snake in the Grass…See More
yesterday
0 Comments 0 Likes