Dionysius on the Inner Light

My favorite early Christian writer is Dionysius the Areopagite.  Traditionally this Dionysius was understood to be the one converted by Paul in the Book of Acts in Athens.  Dionysius' works are the source texts for Christian Mysticism, including the mysticism of the Quietist tradition.  For example, Molinos references Dionysius in his manual of contemplation.  The 'Mystical Theology' of Dionysius is one of the most beautiful and succinct (about five pages) and…

Quaker Voice is an internationally focussed web site for Friends to share their view of the world. The vision of Quaker Voice is to provide the opportunity for Quakers and like-minded writers, many of whom are located in trouble spots around the world, to publish news and commentary. Quaker Voice will provide an alternative to the…

Stepping out of the boat

I've never done a blog before - never blogged? Is it a verb? Anyway, here goes...

This morning while walking with my two dogs and an Anglican friend, I was thinking about how much of a step it has been to move from our local traditional Anglican church to the Quaker meeting. Suddenly, into my head popped the story of Jesus walking on the waves and Peter stepping out of the boat. The story is something like this:

Jesus had been praying all night, while the disciples went off…

Together on the Jesus Way: Followers in God's Kingdom

The Odd Man at the Dinner Party Part II

While walking the dog today I came up with my theory of belief as a TV dinner. Just about every religious faith has one and, certainly, every Christian denomination. The Catholics have a very sumptuous, multi-compartment meal, with a good hunk of meat and lots of really delicious sides, beautifully presented. There are some difficult-to-eat veggies there, too, but the cook in Rome is willing to turn a blind eye if you want to shove some of them under the mashed potatoes. The Baptists' TV…

Together on the Jesus Way: On Greatness & Sight

The Odd Man at the Dinner Party

When I first began attending Quaker meeting 16 years ago, I quickly noticed a notable absence. Sunday after Sunday would pass (or First Day after First Day, as the Quakers insisted on calling it) without a mention of Jesus. I mean, Quakers were Christians, weren't they? It was as if he had dropped down a rabbit hole somewhere in the Quaker past to be replaced by - well, nothing. There was no central figure, no icon, no rallying point. I brought the subject up with the folks that I figured…

Seeing a physic for clarity? Who'd a thunk. Funkier yet, is my Quaker meeting sent me ... well, to scout out the fair as a potential place to staff a booth. It is the "Victory of Light" festival and Quakers believe that each of us contains God's light within. Many of us – Quaker or not, Christian or not – know it from…

New Blog Post:"Why I Call Myself a Christian"

Long one this time:

Please, if you have comments, post them on the blog. If you post them here, many people who read the blog will not have the benefit of your remarks.
This is somewhat different from what a lot of us would consider "Emergent Friendly". But unless that movement is pretty narrow  -- which would be too narrow, IMHO -- I hope that this is a contribution to the…
Continue 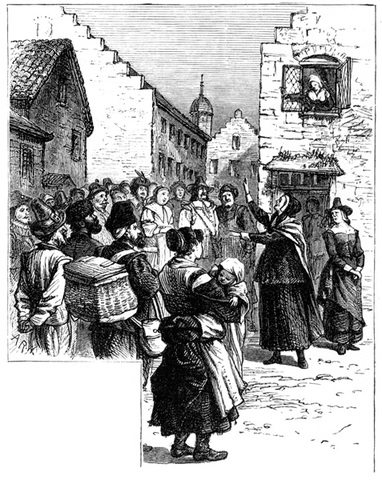 As I examine the whole of my religious past, I can say without equivocation that I observed one essential constant. Even from a very young age, I recall the active presence of women in positions of leadership and authority. Women have long been a majority in the congregations of the average Christian or historically Christian church, but attaining full gender equality…

Exodus 20 Through 23 - The Law Both Large and Small

Exod 20 – The Ten “Words” or Commandments:  The Schocken Bible points out that they are unusual in that no penalties are attached for breaking them as in the more detailed regulations that will follow.  They are the framework against which the more detailed infractions must be understood.  The order differs for Jews as it does for Catholics and Protestants.  The following is the Jewish division:

Deliciously being cast about

I was sent this document on Google Docs.   It is a very critical, almost anti-Quaker, commentary on Philadelphia Friends' involvement with Occupy Wall Street.  I was sent it anonymously, without the ability to comment on it, the ability even to share it, or with an accompanying note explaining why someone wanted to send it to me.  Given these…

Meditations Under the Weather

My stay in Zafra has been extended for a few days due to the rainy weather and our hosts' gracious offer to sit it out in their home. And, as it turns out, My daughter Olivia will be walking with me to Seville and beyond.

With all this time on my hands I've been able to meditate on our walk thus far a little more deeply. While the distance we've covered, the speaking I've done regarding peace, and the 'success' we've enjoyed in being hosted…

Is there anyone experimenting with semi programmed worship in the liberal tradition. If so I would love to hear your experiences.

The Early Friends and the Occupy Movement

I wrote this specifically for my Meeting, but I've recognized it may be applicable beyond that setting.  Apologies in advance for typos. I think I've found and corrected most of them.

Over the past couple of weeks I've been reading the book Seekers Found: Atonement in Early Quaker Experience. The work is written by Douglas Gwyn and published by Pendle Hill Press. My desire to take on this task was motivated…

Exod 16 – The Israelites take the “long way around” to Canaan, through the Wilderness of Shur, around the western coast of the Sinai Peninsula through the towns of Marah and Elim, then to the Wilderness of Sin - see the map if you are as unfamiliar with this territory as I was: http://www.wall-maps.com/bible/232783-over.htm - you have to love the internet.  Here they begin to grumble: “Would that we had died at the Lord’s…

Over the last few days I have been overcome with a heavy darkness.  But the darkness was like a dawn, followed soon by a great light.  I feel compelled to share the message, the fruit of this light, with you.  Indeed, you will note, I have written about same-sex relationships before, but I did so from my own mind; my own views.  Whereas before I wrote from conscience, today I write from light.

You may think that the question of honoring same-sex…

Meeting for Worship for Apple Pressing 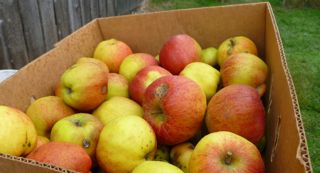 I appreciate Quakerism’s absence of rituals—an appreciation born from many years in the Lutheran Church, kneeling on command, singing hymns someone else chose, reciting a creed I didn’t understand, and daydreaming through mumbled invitations to communion.  We unprogrammed Quakers, with our hour of silent worship broken occasionally, and…