I tend to over-simplify things even though I do not live in a simple manner outwardly.  My outward life is somewhat complex for a number of reasons that I have accepted as a tool that I am called to use for spiritual reasons.  I did not reason my way to where I am; rather, I have found myself mindfully here at a place where it seems the Spirit has placed me.  And the Spirit has ministered and comforted me in this place because it is not where I would choose to be if I were left to my own…

I'm beginning a journey of  sharing some of my Quaker experiences on my blog.  Most of my audience is non-Quaker, but has been exposed to Quaker perspectives and practices through the creative genius of Contemporary Christian Music pioneer, Rich Mullins.  His mother was a birthright Friend.  He described himself as a Quaker, followed Quaker practices, and expressed Quaker values.  As a close friend during his formative years as an artist, I'm hoping to give his large audience a few glimpses…

The last couple days I've been lichenizing (observing lichen) on the Elk River here in Oregon. I was walking the brooks that feed into Elk River, and watching for various lichen species on the rocks, tree, and shrubs and in gratitude for the inward Life filling my conscious and informing my conscious. To be in that new life ... no longer anchored in the perceptions and sensations all around. I am alive in eternal Presence itself and suddenly these words washed over me:…

In response to this thread I looked up  a bunch of stuff in "Elias Hicks: Quaker Liberal" about Hicks and reason/rationalism, his influences, and how that influenced his theology, because I mentioned his use of reason being criticized in his life and was asked for sources. Here are selected excerpts . I'm only posting one of them in that thread.

"As to the word Established, we further add, That the word (as used in the Objection) is disowned by us; for though the Children of God may be Instruments in the hand of the Lord, to establish one another in the Faith of God's Elect, yet 'tis not in their power, or any one of them, positively and without exception, to establish what ought to be believed and practiced, whether it respect Doctrine, or…

In a recent piece entitled “God” is no Substitute for Strategy” Micah Bales breaks down the founding Quaker testimony of and witness to the sufficiency of the immediate and direct inward presence of the Spirit of God as “crazy talk.” He then doubles down by labeling or characterizing…

Elias Hicks on what is required of a Christian

I recently got my own copy of "Elias Hicks: Quaker Liberal," a book I borrowed from my university's library but did not finish before graduating and returning the book.  On page 186, it says that the last page of Hicks' home journal finally answered a question both Friends and non-Friends frequently asked:  what is required of a Christian?  His answer has 3 parts. 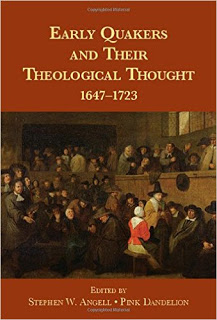 The introduction of this volume, penned by editors Pink Dandelion and Stephen W. Angell, wastes no time in reminding readers why this is an important…
Continue

Sheila Garrett deconstructed the word responsiblity as part of her following note. I had never thought of this word in this way. It opens up possibilities for action in ways that you may not have thought of... both as individuals and as Faith groups.
Sheila is walking from Vermont to Georgia. You can follow her diary on…
Continue

William Rogers: The founding Quakers and no adherence to outward Marks and Signs.

It has been suggested the Rogers' text is difficult to read. I'm working on a way to share Rogers' "Christian Quaker" by making it easier to experience his work. This is a beginning. I offer an overview and then link to the original text with somewhat of a paraphrase along side.

In this section Rogers deals with the contention, by some, that it is silly for someone to…

Mike, I wonder if your statement, "identities are figments of human conceptualization, not real boundary markers", makes sense.  It sounds to me like postmodernist sloganeering.

For example, if I am hungry I want to distinguish, that is to say,…

On the Practical Nature of Being Lead in the Light.

The essence of human being lead by the impulse of directly experiencing Presence from within the conscious and conscience is the leading of Presence in itself. In this life, human being acts in the context of the activity or awareness of the inshining Light. Actions are guided by whether the inward experience of the Spirit sustains in the activity. When the inward Light dims in a particular activity, that activity is adjusted in conformity with the dimming inward radiance in…

The Spirit of Truth

The 'Holy Spirit' is sometimes referred to in the Bible as the 'Spirit of Truth'.  It is apparent from biblical accounts that while on Earth some two thousand years ago, Jesus embraced a mission of bringing true reality to humankind.

Knowing he would not live forever in this world, he told all who might also embrace his mission,

“I will ask the Father to send you another Helper, the Spirit of truth, who will remain…

Hyper-individualism and the Testimony of and Witness to the Sufficiency of Presence itself.

"Hyper-individualism is the displacement of communal commitments which are replaced by individual expression.  The best example I can think of in Quaker history is the replacement of the Peace Witness as a Communal Commitment with the individual conscience of members.  Whereas in the past members of the Quaker Meetings could be 'written out of the Meeting' for violating the Peace Witness, or living a life that was felt to be contrary to that witness,…

The Absurdity of the Cross: Bearing our own for the sake of others

The cross is lost to the church. While it hangs on walls of sacred buildings and around the necks of believers, we are no way yoked to it if our responses to murder are any indication of our faithfulness as related to this ancient symbol of torture. Truly, I say to you, the nature of the cross is not found nearly as much in it’s capacity to remind us of the torture of Jesus; but the nature of the cross is most powerfully known in the church’s willingness to burden…

In “Seeing beyond the Projections” (9/7/2015), I voiced my concern that modern Friends across the spectrum tend to perceive liberal or universalist Quakerism as representing anything but…

Most Quaker Meetings are Small . . . But

My meeting is small - perhaps an average of just 12 to 25 Friends at worship each Sunday.  Yet we sponsor one of the major ministries in our suburban community - in a very public way.  Take a look at what it's about:

I thought it would be fun and interesting to hear from others about the ministries of your meetings.  It might help the rest of us to get ideas of how we can "seek that of God…