Ezekiel 18 – The virtues of the “upright man” are described: “law-abiding and honest; he does not eat on the mountains or raise his eyes to the idols of the house of Israel, does not seduce his neighbor’s wife or sleep with a woman during her periods. He oppresses no one, returns pledges, never steals, gives his own bread to the hungry, his clothes to the naked. He never charges usury on loans, takes no interest, abstains from evil, gives honest judgment between man and man, keeps my…

Hal & Nancy Thomas shared with us this week about their recent trip to visit and minister alongside Bolivian Friends. They also shared a great deal about the history of Bolivia Yearly Meeting, and Northwest Yearly Meeting's involvement there.

Ezekiel 16:35-63 – For having given themselves to the terrible idolatries and human sacrifices that they performed (especially during the reign of Manasseh when – my note says – such practices were encouraged by foreign alliances), God will bring these “allies” together to bring Israel (Judah?) down. They will ravish “her” and leave her naked.

Compared with the nations around her, Israel has been by far the worst. Sodom and Samaria, Edom and the Philistines will gloat…

Quakers, worship, and separate spaces... A new manner of "hedge"

The discussion below, of Quakerism and Heterotopia, is not an idea that is by any means unique to me. Other Friends have written on this topic before, and a quick google of the two terms together should produce results. The thoughts below are simply my own attempt to construct some sort of theological background for some constructs that are often in the background of much of what I right.

In sending out the essay below, I received some good feedback. An important piece was…

Ezekiel 16:1-34 – Ezekiel is once more told to confront Jerusalem and tell her life story and Yahweh’s involvement in it; it is an allegory:

Child of both Amorite and Hittite, the city was born because Yahweh was “passing by” and came to her rescue at birth. He watched her grow and at the age of marriage Yahweh bound Himself to her by a Covenant. God gave his love everything – fame, beauty, riches – everything. Word of her riches and beauty spread and she became…

Friends General Conference and Conservative Friends have more in common that they have differences. An interesting difference is the concern for universalist thinking. It is my belief that the two Quaker entities can find a common ground through which a common communion can take place through concepts of universalism. However, there are some things that I feel must necessarily take place for communion to be possible.

First, I want to address some particulars. Conservative Friends, as…

Ezekiel 14 – Ezekiel is visited by the Elders of the people, but he is called to testify against them because they have “enshrined idols in their own hearts” (14:3) and have not been faithful. Ezekiel is to tell them this in no uncertain terms, and Ezekiel “hopes to touch the heart of the House of Israel who have deserted me in favor of a pack of idols” (14:5).

Come back, he urges. But the retribution God plans will not touch the holy ones – those like Noah or Daniel…

When I was much younger I bought a motorcycle.  A small underpowered two cycle motorcycle without an oil injection system.  Not having an oil injection system meant that spark plug fouling was part of my life.  I used the motorcycle for a round trip commute of 100 miles on a daily basis.  Because of the fouling I had to carry extra spark plugs and on average once a week the bike would die and I'd be on the side of a road changing spark plugs.  Not an ideal situation but one I lived with for…

Can Friends Argue With One Another?

At times that appears to be the view of Friends, but that doesn’t seem right to me, so here’s an argument for arguments.

First, the case for the other side, as best I understand it.

“I was not aware that…

Ezekiel 12 – Ezekiel is asked by the Lord to act out or “mime” what will soon be happening to the people of Israel – that they will be led out of the city into exile because of the terrible things they’ve been doing. He does do this. He packs his bags just as the king of Judah will soon have to pack up his bags and escape through a hole in the city’s wall. He does it as instructed during the day and makes sure that everyone can see him acting it out. But I don’t think he gets much…

Ezekiel 10 – The prophet sees another very hard-to-follow vision: above the vault, over the cherubs’ heads, something that looks like a sapphire and above this a throne. The man in white (the vision of chapter 8) is told to take burning coal from between the cherubs and scatter it over Jerusalem.

The man goes into the courtyard of the Temple and a cloud fills the inner court. “The glory of Yahweh rose off the cherubs,” and the court is filled with the brightness of the…

ESR student Craig Goodworth was the presenter for this past week's Peace Forum. He presented his project Liminal Ground, which is an art installation in his home state of Arizona. 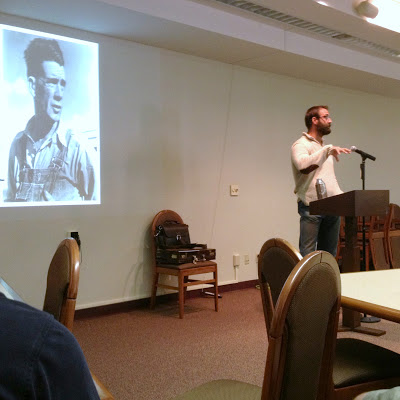 To read more and watch a video about the project, please visit:…

Ezekiel 6 – The Word of God comes to Ezekiel, and addresses him as “Son of Man.” He is told he should prophesy against the “mountains” of Israel. They are the “high places” where idols like “sun images” are worshipped and human sacrifices (I think) are practiced by an unfaithful people.

God will punish the people for this but some will be spared and they will be scattered. Then after this time and this devastation, the people will “remember” Yahweh and will understand…

Ezekiel 4 – God tells Ezekiel how he is to embody or act out the prophecy God has given him: he lays a brick in front of him and scratches on it the name “Jerusalem.” Then he is to surround it with “siege works” - an iron pan that will fill the role of a wall between him, the besieger, and the city.

He is told to “lie down on your left side and take the sin of the House of Israel on yourself” (4:4). He must lie on his left side for 190 days, and then on his right side…

Ezekiel 2 – Ezekiel hears a voice calling him “son of man” (2:1). The term is used in Ezekiel and later Daniel to emphasize the distance between the God behind the vision and voice and the mere man who is receiving them. The first use of the term “Son of Man” [ben-Adam] is in Numbers 23:19, but Ezekiel uses the term over 90 times in his writings.

This week we participated in our city-wide food drive, Feed the Need. Our pastoral intern, Sarah Klatt Dickerson, brought us a message, and then we participated in a creative and fun worship element of praying over the food we collected. Here's the message, Active Peace: Being Like Jesus, which also includes a video Sarah made of some of our kids talking about hunger.

ESR Associate Professor of Pastoral Studies and Williamsburg Friends pastor Phil Baisley shares about his travels to attend Soulreaper gatherings in Vienna and Budapest in this recent sermon: 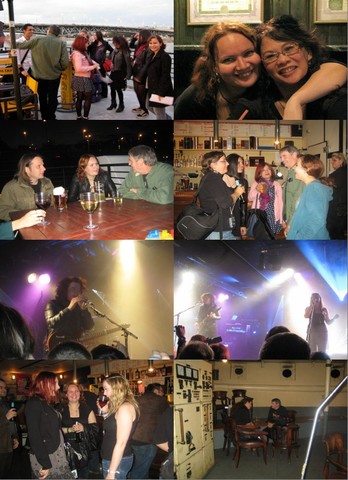 Just for fun, not really expecting anything, I talked to Jay Marshall, dean of Earlham School of Religion. I told him about Soulreaper, about the March gathering, about the…

Introduction to Ezekiel: Ezekiel is believed to have been born around the year 622 BC and was about age 25 in 597 BC, when he was exiled to Babylon along with King Jeconiah (also called Jehoiachin) and 3000 other “leaders” or upper class people from Jerusalem. He was part of the priesthood. His prophetic call came after he had been living in exile for about five years, and the vision he had – the larger vision of what the people of God were to become WITHOUT land and WITHOUT monarchy…