The narrative of Moses going before Pharaoh to demand release of his people is perhaps the most central part of the Old Testament biblical narrative and one of the most influential stories ever. The debate as to whether it actually happened exactly as told is intense. There is little if any supplementary historical data to support it but the memory of it in the history of the Jewish people is also so intense and important that it is hard to believe it has NO basis is fact. It is the memory… 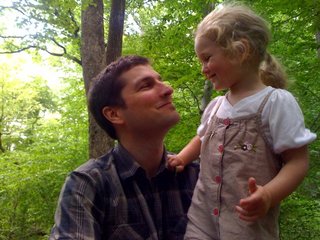 Together on the Jesus Way: Astonished & Afraid

Since "Quakers do it in the Light" we three set up on a well-lit terrace in the midst of the stairs coming down from the building to the north. Goings on around us were sporadically on the ugly side, the police marching into the crowd from time to time to deal with some provocative individual while the people nearby yelled indignantly.

(The best of the local 'Occupy'… Continue

Silence is My Leading

Silence is My Leading

Since I became acquainted with the Quietist period of Quaker history I’ve been attracted to it.  This period, which some Quaker historians refer to as ‘The Second Period of Quaker History’, is the one where I find the most nourishment.  It is the period which produced ‘A Guide to True Peace’ which has been of such help in my own inward journey.

Put up a new blog post today on "Fear" -- its relationship to illness, love, and the role of faith in healing it.

Hello: My family and I have been going to a Friends meeting about once a month for about 6 months-the closest one is 26 miles away-we like it. Although my wife and I were born and brought up as Lutherans, I have been a Unitarian for the lost 20 yrs aprox. I am out of the habit of prayer-but I know that many find it a good way to recharge their spiritual batteries. I have been praying for 2 min per day- I'm not sure who or what I pray to or what to pray for- so I'm been asking the Light-…

What Do We Worship?

My husband and I take a right at the driveway marked by a light blue sandwich board sign: 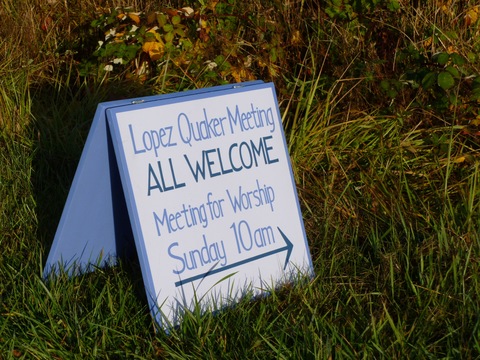 We enter the living room of the farmhouse where our Meeting gathers every Sunday for worship. I settle into a straight-backed chair softened with an ivory sheepskin, close my eyes, place my feet flat on the floor, rest my open palms in my lap, and…

Yesterday I attended my first Quaker meeting for worship. The experience was, in many ways, what I expected--and of course, also full of surprises and unexpected blessings.

I ended up arriving a few minutes early (first-timer's nervousness!) while the adult religious education class was finishing up. I slipped into a seat near the door as they concluded their discussion. A couple people quietly greeted me after they broke up, and one gentleman gave me a brochure for new visitors…

With Occupy movements sweeping the country and rocking the city of Philadelphia to its core, I set out to investigate how Quakers are getting involved with this national call for social change.…

the beauty of the question mark????

wow how we can have that ahh haa moment at any time in our lives amazes me. To me they are gift of grace that we have done nothing to receive!!

I have a wonderful human trait that i can't shake, I want to know the unknowable for a certainty!!(funny but it's true) I get into a state of mind almost like some one in a  drug craving search for their drug of choice, looking for TRUTH!!! surfing the internet for hours on different religious sites looking for spiritual TRUTH(i now find this…

This past week at George Fox University we have been engaging our Quaker heritage in a focused way. While our roots are Quaker, and there is still a strong Quaker community on campus, many of our students have no idea what a Quaker is or believes. Among the events we held were three chapel services, with the link to those found below. We hope you will engage these and continue to conversation!

Having returned to Egypt from Midian and reestablished a connection with his brother Aaron, Moses is now reintroduced to his people

Exod 5 - Together, Moses and Aaron go to ask Pharaoh to let the Hebrew people go “hold-a-pilgrimage festival” ["hag" in Hebrew is related to hajj in Arabic] in the wilderness. Pharaoh wants to know “Who is YHWH, that I should hearken to his voice” (5:2). Pharaoh accuses them of just being lazy and looking for an excuse to get out of doing the work…

Together on the Jesus Way:All Were Satisfied

Well, I continue to grew in understanding of Quakerism. I continue to like what I read & experience. I continue to attend Meetings for Worship and enjoy each moment I am there and wishing I could attend more of them.

A couple of weeks ago, I was oncall for work. So I sat in the lobby with the greeter, just in case the cell phone went off.

It's been an interesting few weeks to say the least.

First off, I found out on the 1st of the month that I am pregnant. Don't tell ok? He,he! My dear husband is quite concerned and want's to keep things under wraps until we hit the three month mark. For reasons I'll go over shortly I feel the need to tell, I need community support in this.

This is my second pregnancy. My first was in August of 2009. I carried to 13 weeks but when the…

Together on the Jesus Way: When Certainty is Sin

Danger of isolation and absence of other-minded people.

I watched “Jonestown: Paradise Lost” documentary two weeks ago. This movie told about religious organization, which called “Peoples Temple”. 918 members of the organization, including 276 children, suicided  or were killed in 18 Nov 1978. I was shocked by this movie. I’d like to share my point of view about this.

Peter S. Krynski replied to Mike Shell's discussion '“On Mediation” by Mary Klein'
"Love the article and the portrait of Jacob Nayler, titled The Great Deceiver, the False Messiah,…"
yesterday

Listening, prophecy and reconciliation: allyship in a climate emergencyJoin us for a week of…See More
1st month 13
0 Comments 0 Likes

Matthew Callow commented at the end of his discourse on liberal British Quakerism: "It often feels…See More
1st month 12
0 Comments 1 Like