On Turning up in Her Nest with the Plough, November, 1785

It is time to expand on that picture a bit. We will have been here two weeks tomorrow. This week we are fairly busy, involved in the resident students’ orientation week. We started with tea at the Director’s house, which was not the chatty tea party I had been expecting, but was an occasion to share in a deep way, what had been our journey here. Several of the team are fairly new, as well as us and the resident students, so it was helpful to us all to have that sharing time. Today’s…

1 Maccabees 13 – With Jonathan in Trypho’s custody, Simon takes over the leadership of the Jews. He gathers the people, encourages them and rekindles their spirit. He completes the planned fortifications.

Trypho assembles his army to invade and sends envoys to Simon demanding a ransom of 100 talents and two of Jonathan’s sons before he will free Jonathan. Simon prepares to pay it more to assuage the desires of the people than anything. He believes it is all a…

1 Maccabees 13 – With Jonathan in Trypho’s custody, Simon takes over the leadership of the Jews. He gathers the people, encourages them and rekindles their spirit. He completes the planned fortifications.

Trypho assembles his army to invade and sends envoys to Simon demanding a ransom of 100 talents and two of Jonathan’s sons before he will free Jonathan. Simon prepares to pay it more to assuage the desires of the people than anything. He believes it is all a…

1 Maccabees 12 – Jonathan decides that it is not enough to be siding with Trypho and his attempt to set the child-king Antiochus up.

Jonathan continues to use “triangulation” as a policy; he sends people to Rome and Sparta to build other alliances against the Hellenists. He sends letters and ambassadors to renew or initiate treaties of friendship. The author includes a copy of the letter Jonathan sends to the Spartans. It reminds them of good relations in the past and…

There is a famous sermon of the Buddha called ‘The Fire Sermon’:

‘Thus I heard. On one occasion the Blessed One was living at Gaya, at Gayasisa, together with a thousand bhikkhus [monastics]. There he addressed the bhikkhus.

"Bhikkhus, all is burning. And what is the all that is burning?

Maccabees 11:38-74 - The politically complex situation around which the Books of Maccabees are constructed is not easy for modern readers to understand. Generally, in school, history teachers focus on the rise of the Roman Empire in the years we are discussing here. The details of the Hellenistic world simply do no make it into the history books. What is happening here is that the Hellenistic rulers - Ptolemies and Seleucids - are trying hard to expand and… 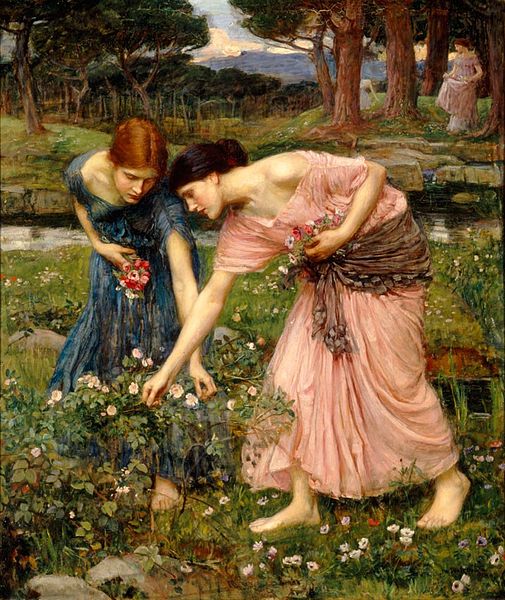 To the Virgins, to Make Much of Time

I have published a collection of my poetry - a print book, in addition to various eBooks.

Revealing the Bones of Truth

A new edition of Juliet Barker’s 1994 biography, The Brontës, tells a story about Branwell, the brother of Charlotte, Emily and Anne.

In 1834, Branwell began to study painting with a member of the Royal Academy of Art. The student painter sketched a portrait of his sisters and penciled his face in among theirs. When it came time to paint, he…

Maccabees 11:1-37 – Ptolemy VI tries to take possession of Alexander’s kingdom even though he is Alexander’s father-in-law. Ptolemy tries to win Demetrius’ cooperation by promising to give his daughter [Alexander’s wife at this time] to be his wife instead. The next sentence says that this actually happens right away.

Next, Ptolemy enters the city of Antioch and “assume[s] the crown of Asia” (11:13). When Ptolemy and Alexander finally engage in a decisive battle near…

1 Maccabees 10:51-89 - Despite the fact that Demetrius defeats the forces of Alexander Balas, Demetrius himself is killed by the end of the day. Alexander then sends agents to Ptolemy VI, king of Egypt, claiming victory over Demetrius and asking for his daughter in marriage.

Ptolemy writes him and arranges to meet him in the city of Ptolemais, where Akko is today on the Mediterranean. It is 150 BC when the marriage occurs.

After the rather sudden death of our lead pastor's husband this week, we spent the worship service mostly in prayer for their families and for others on our hearts. You are invited to listen to the podcast here.

The Princess: The Splendour Falls on Castle Walls

The splendour falls on castle walls
And snowy summits old in story:
The long light shakes across the lakes,…
Continue

1 Maccabees 10:1-50 – The port city of Ptolemais (Acca) is taken by Alexander Balas (Epiphanes). King Demetrius sends Jonathan a conciliatory letter to prevent him from joining up with this Balas against them. He gives him authority to raise an army (militia). Jonathan takes charge in Jerusalem and begins to rebuild the city. King Alexander hears of what Jonathan is doing and approaches him, to make friends with him. He offers to make him “high priest” of his nation. Jonathan then…

Dear Lord and Father of mankind,
Forgive our foolish ways!
Reclothe us in our rightful mind,
In purer lives Thy service find,
In deeper reverence, praise.

In simple trust like theirs who heard
Beside the Syrian sea
The gracious calling of the Lord,
Let us, like them, without a word
Rise up and follow Thee.