Daily Old Testament and Early Christian Writings: 2 Chronicles 5 and Augustine's Treatise on the Profit of Believing 13

2 Chronicles 5 – The work is finished. Solomon brings in the things his father had dedicated—the stores of silver and gold, etc. The elders, and heads of the tribes, ancestral houses come to bring up the Ark out of the city of David to the new Temple. The number of sheep and oxen sacrifices cannot be numbered. The Ark is placed “underneath the wings of the cherubim” (5:7).

“There was nothing in the ark except the two tablets that Moses put there at Horeb, where the…

This year I attended portions of both Iowa Yearly Meeting and Iowa Yearly Meeting Conservative. Attending both, in many ways felt like a homecoming. There was a comfort level as I connected with fellow pilgrims and we all basked in the goodness and…

Daily Old Testament and Early Christian Writings: 2 Chronicles 3-4 and Augustine's Treatise on the Profit of Believing 12

2 Chronicles 3 – The building is located at the place David designated, “on the threshing floor of Araunah the Jebusite” (3:1) on Mt. Moriah. It is started on the 2nd day of the 2nd month [mid-spring] of the 4th year of his reign. The measurements are all given in “cubits of the old standard”—60 by 20 [90 feet long and 30 feet wide]. The vestibule 20 cubits long and 120 cubits high.

It is overlaid with pure gold. The nave [main room] is…

Daily Old Testament and Early Christian Writings: 2 Chronicles 1-2 and Augustine's Treatise on the Profit of Believing 11

So yesterday, we finished with the July readings I added to the last month of posts so that we could catch up to the readings we are on for the rest of the year. We are back on the scheduled readings.

2 Chronicles 1 – Solomon summons the people or at least the leaders—commanders, judges, heads of families (1:2), and takes them to the “high place” at Gibeon. On the bronze altar that Bezalel had made there for it,…

The Road to ESR (and Beyond)

ESR student Martin Melville reflects on finding his way to ESR, and his recent decision to enroll as a degree-seeking student: 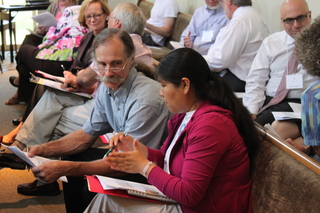 The meeting bulletin had a notice in it: ESR Traveling Ministries. Philadelphia Yearly Meeting, Arch St. Meetinghouse. Arch Street is most of four hours from home. On a busy Saturday. I attended. I…
Continue

1 Chronicles 27 – A list of the people, heads of families, commanders of thousands, hundreds and officers—divisions numbered 24,000. Each one is assigned a month. Names that pop out are Banaiah, son of priest Jehoiada, commander of the third month’s division. He was commander of the Thirty. Asahel, Joab’s brother was in charge of the 4th.

To Know Him Is to Love Him

This past week, members of the Ministry and Worship and Healing and Reconciliation committees met to discuss Eldering. As our guide, we used Margery Mears Barrabee's 2007 Pendle Hill pamphlet entitled Spirit-Led Eldering. Barrabee had once been a member of our Monthly Meeting, so many of the anonymous illustrations she used to articulate her points described…

1 Chronicles 23 – David makes Solomon king over Israel. He assembles all the leaders, priests and Levites.  There were 38,000 Levites over 30 years old of whom 24,000 are given charge over the work in the house of the Lord, 6,000 are made officers and judges, 4,000 gatekeepers and 4,000 musicians to offer praise to God with instruments.  They are organized by division corresponding to the sons of Levi—Gershon, Kohath and Merari.  They are named. Moses and Aaron are descendent from Kohath…

Amazed At The Lab

Vastly enjoying Rebecca Solnit's "The Faraway Nearby" and her descriptions of a maze and a labyrinth. She writes, "...a maze, which has not one convoluted way but many ways and often no center, so that wandering has no cease or at least no definitive conclusion." With a labyrinth, however, "You may wander, may learn that in order to get to your destination you must turn away from it, become lost, spin about, and then only after the way has become overwhelming and absorbing, arrive - having…

1 Chronicles 21 – Satan, it says, inspires David to take a census. Joab tries to warn him that it will bring guilt on Israel, but the king insists. Joab comes back with a number of 1,100,000 of military age and readiness in Israel and 470,000 in Judah. Even in David’s reign they were conceived of as separate segments; either this or the writing of Chronicles comes after the division of the two kingdoms. But Joab does not complete the count in Levi…

1 Chronicles 15 – David builds a palace in the city, and a place for the ark, “a special tent” (15:1). He commands that only the Levites shall carry the ark in the future. He thinks this is why they had trouble the first time. Then he assembles the people to bring the ark up to Jerusalem. All the descendants of Aaron and the Levites are assembled. David also gets the Levite chiefs to appoint musicians to accompany the Ark. Kenaniah is the Levite leader of musicians “for he understood…

1 Chronicles 13 – David consults with all his officials. They send word to others in Israel to come to Jerusalem. David wants to bring the Ark of God back “for we neglected it during the reign of Saul” (13:3).

The Ark is in Kiriath-jearim in Judah. They carry it on a new cart from the house of Abinadab with Uzzah and Ahio guiding it. “David and all Israel were celebrating before God with all their might, singing songs and playing all kinds of musical instruments –…

Daily Old Testament and Early Christian Writings: 1 Chronicles 11-12, Song of Songs 6-8 and Augustine's Treatise on the Profit of Believing 4

1 Chronicles 11 –David becomes the king of all of Israel. The elders come to Hebron and David makes a covenant with them. They march to Jerusalem (Jebus), but are told they will not be permitted to come there (11:5).

David tells his men the one who attacks the Jebusites first will be commander, so Joab, son of David’s sister, Zeruiah, does it. David establishes himself in the city.

David’s warriors include Jashobeam, leader of “the…

Honey in the Wood

As a survivor of literary, not televised, fame, I know to look to Honeywood, not Hollywood. For there is a good-natured guy who finds his benevolence in everything and everyone he meets. With a Goldsmith's touch, not that of a King Midas, he shapes people and things to his own likeness. His motto of "universal benevolence" is the pen highlighting everything as important or placing confident assurance in the responsibility of everyone.

There but for the teacher who argued that…

Daily Old Testament and Early Christian Writings: 1 Chronicles 1-10, Song of Songs 4-5 and Augustine's Treatise on the Profit of Believing 3

Lawrence Boadt in his Reading the Old Testament groups 1 and 2 Chronicles with Ezra and Nehemiah together as post-exilic texts that form the basis for modern Judaism (449). They “stress the role of cult, prayer, worship and ritual purity as a way of life” (449). The priestly leaders “took up and rewrote the great Deuteronomistic history found in the Books of Samuel and Kings” (451).  They saw the…

Daily Old Testament and Early Christian Writings: 1 Samuel 30-31, Song of Songs 1-3 and Augustine's Treatise on the Profit of Believing 2

1 Samuel 30 – Upon returning to the town given to him by the Philistines, Ziglag, David learns that the Amalekites have attacked and burned it, taking the people off as captives.  David and his men weep—he has also had his own wives taken—but the people are also angry with David for having left the town without proper defense. “But David strengthened himself in the Lord his God” (30:6).

David has Abiathar bring him the ephod and he seeks the advice of the Lord.…

1 Samuel 28 – When the Philistines muster to fight Israel, Achish makes it clear that David will have to join them in battle against his own people; he makes David his bodyguard.

Samuel has died and all Israel mourns for him. “And Saul had banned from the land of Israel all mediums and those who consult the spirits of the dead (28:3).

Saul and his army are encamped at Gilboa; the Philistines are at Shumen.  Saul seeks guidance from the Lord, but the…

When has following the Light taken you "off the map"?

Chapter 14 of Minding the Light: Our Collective Journal is now available online and attached as a PDF file below.  For this chapter, we invited Friends to respond to the query, "When has minding the Light taken you ‘off the map’? Tell us a story about following the Light into a wilderness of any kind.”  We received a total of 14 responses to this query, reflecting the human experience from comedy to tragedy

We invite you to read these stories for yourself and…

1 Samuel 26 – The Ziphites come and report David’s whereabouts to Saul.  Saul takes his usual 3000 men to go hunt for him.

When he learns of the expedition, David sends out spies to find Saul. Ahimelech, the Hittite and Abishai, son of Zeruiah, go with David to Saul'’s camp by night and find Saul asleep with a spear stuck in the ground next to his head. Abishai thinks David should kill him, that God has given him into his hand once again.  But David asks, “who…

Separations and views of atonement

Separations and views of atonement.

It would be simpler to say why can’t we all just get along. But the answer to that would probably not help us understand our differences or the solutions that addresses these…