Judith 3 – The people of the region try to placate Nebuchadnezzar, prostrating themselves before him and telling him he can have everything they have. He moves through the region and destroys all their religious sites and demands that they worship only him as a god.

The New Jerusalem note makes clear that all this is not really historically true; it was the Seleucid rulers, following Alexander’s example, who were the first to insist on divine…

Introduction to Judith: This book is another one of the apocryphal books. It is in St. Jerome’s Latin (Vulgate) version of the bible (late 4th century); it was translated by Jerome from the Aramaic. Like Tobit, which is also part of the apocrypha, Judith is not intended to be historical. It uses historical personages to convey a larger message – in the case of Judith, the ability of God’s chosen people to be victorious over its enemies. The editors of the New…

Beth Woolsey (she has a hilarious parenting blog here) gave an excellent message this week on "A Call to Translucency" based loosely on John 9. She also showed this video. This has been a really cool series on authenticity in our faith and worship.

To them God granted a “pillar of blazing fire to guide them on their unknown journey” (18:3).

Then, as the Egyptians had earlier (c.1200 BC) attempted to kill all the firstborn of the Jews, they now suffered the loss of their firstborn in the 10th plague. It is this…

“Indeed, as the Concern was weighty, so I was not forward, lest I should be found to Run before I was sent; therefore I waited patiently to be fully satisfied in the Matter, not only a Day, or a Week, but many Months; and then as my Concern grew heavier upon me, I gave up, begging the Lord to be with me, and to give me a full Mission for so weighty a Concern. Alice Hayes, A Legacy or The Widow’s Mite.

I’ve begun to find the Quaker… 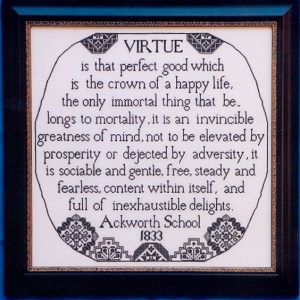 For a long while, I’ve been contemplating the notion of Meeting discipline and how it has evolved over time. What form does it take today? Around a century and a half ago, Friends were read out of Meeting for simply daring to marry non-Friends. Punishment had a very different context back then, one that was, it appears,…

Early Quakers likely would have been shaking their heads if they’d attended meeting with me last Sunday. Some present-day Friends might find my meeting’s last-Sunday-of-the-month practice peculiar, too. That’s when, instead of an hour of unprogrammed worship, people of all ages in our group worship through song.

There is no perfect, best or right time in life, is there? I am slowly reaching that conclusion and tired of waiting – endlessly.

That translates into savoring what is the present. How many times have I read that in an inspirational book or heard someone wise articulate it? And I knew each time there was truth…

Wisdom 17 – “Your judgments are indeed great and inexpressible, which is why undisciplined souls have gone astray. When impious men imagined they had the holy nation in their power, they themselves lay prisoners of the dark, in the fetters of long night, confined under their own roofs, banished from eternal providence” (17:1-2). This passage is very difficult to see at first; it is about the ninth plague suffered by the Egyptians – three days of darkness [see Exodus…

Wisdom 15 – The justice and patience of God are focused on here. “If we sin, we still are yours, since we acknowledge your power, but knowing you acknowledge us as yours, we will not sin” (15:2).

Those who fashion works of clay or silver or gold forget that they too have been fashioned from earth, but they spend no time thinking of the “imminent death or on the shortness of life” (15:8). They misconceive “the One who shaped him, who breathed an active soul into him and…

Last week we heard from Paul Bock on "Speaking the Truth in Love"--a challenge for us all, to be sure!

Wisdom 13 – Those who worshipped the beautiful things in nature – fire, wind, stars, etc – rather than their creator are next addressed. They are less to blame:

“Small blame, however, attaches to these men, for perhaps they only go astray in their search for God and their eagerness to find him; living among his works, they strive to comprehend them and fall victim to appearances, seeing so much beauty (13:6-7). Still, if they are so intelligent, they should be…

The concept of white privilege haunts me. How blind am I to my own? When do I fail to see how it derails others?…

Wisdom 12 – “Little by little, therefore, you correct those who offend, you admonish and remind them of how they have sinned, so that they may abstain from evil and trust in you, Lord” (12:1-2).

The author explains that God made way for the Jews in the holy land of Canaan because the ancient people there practiced loathsome rites of child sacrifice. Yet God “treated them [the Canaanites] leniently . . . [giving] them a chance to repent”…

The Death of First Day School and How It Happened

Wisdom 10 – He starts here to go over the history of human beings and Wisdom’s place in that history from Adam to Moses. “The father of the world, the first being to be fashioned, created alone [unique in nature], he had her [Wisdom] for his protector and she delivered him from his fault; she gave him the strength to subjugate all things” (10:1). The Jerusalem Bible footnote explains that “she” delivered Adam through the practice of repentance and…

Wisdom 9 – Here Solomon pleads with the Lord to grant him Wisdom: “‘God of our ancestors, Lord of mercy who by your word have made all things, and in your wisdom have fitted man to rule the creatures that have come from you, to govern the world in holiness and justice and in honesty of soul to wield authority, grant me Wisdom, consort of your throne, and do not reject me from the number of your children” (9:1-4).

Wisdom 6 – This is addressed specifically to the kings of the world. Power is a gift from God and must not be abused.  We can see it as advice to all who have political power and ever all who have any kind of authority over other people:

“[P]ower is a gift to you from the Lord, sovereignty is from the Most High; he himself will probe your acts and scrutinize your intentions” (6:3).

“Wisdom is bright and does not grow dim. By those who love her she is…

My latest poetry eBook can be downloaded free of charge.  See:

My poetry can also be read at:…

Wisdom 3 – The souls of the virtuous are in God’s hand. It is true their death seems like annihilation, but they are at peace. “Their hope was rich with immortality” (3:4) The New Jerusalem note says this is the first use of the word “immortality” in the Old Testament. It means the abiding unity of the soul with God and does not yet mean resurrection of the body. “Those who are faithful will live with him in love; for grace and mercy await those he has…