Interpreting Our Past -- Part 1

Interpreting Our Past – Part 1

Here I would like to make a few comments on Chapter 12, ‘The Age of Quietism’ which begins on page 119.  These are impressionistic comments, not a…

The Underground Railroad: Pacifist or Warlike? 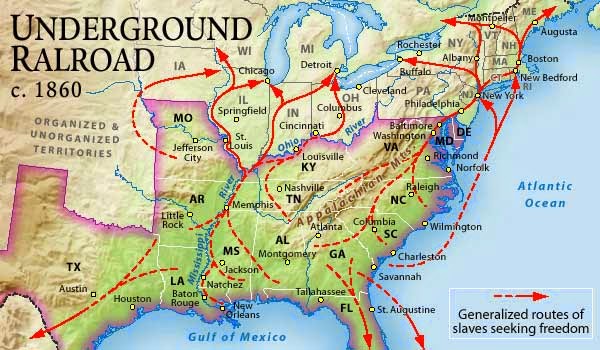 Yesterday was Memorial Day. Pacifist religious groups like my own are more inclined to celebrate the acts of those who sought to circumvent war and warlike behavior, instead of their bravery in armed conflict. Ironically enough, I am a…

Resting in the Guide

Who Speaks for Peace on Memorial Day?

For a Quaker, what’s the right approach to Memorial Day? Is it a day to celebrate? A day to witness against? A day not even to notice?  Every Memorial Day, from morning to evening, I wonder about this.

Here in Topsham/Brunswick, Maine we have an iconic Memorial Day celebration. There’s a ceremony in Topsham at the town hall/fire station to mark the occasion, then a very locally-flavored parade that marches down Main Street (Topsham), crosses the Androscoggin River, then continues…

The Case of Rust vs. Abrasive

Rust: Like Calvinists of old and the modern rationalist-philosopher Thomas Hobbes, we warn the Court of Quaker Opinion of the inherent selfishness of human nature.

Abrasive: Whether the "amicable collision" of Shaftesbury's England or the pranksters on the American frontier, basic human incivility is a natural abrasive.

Rust: Without a social contract, mayhem rules as anarchy.

Abrasive: Without the usurping power structure, people are forced to get along and encouraged…

Genderqueer and Other Difficult Concepts 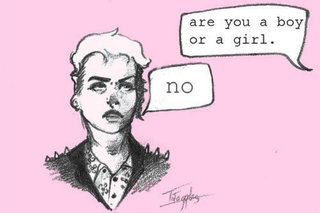 "If you wanna know something and he won't tell you, cut off one of [the manager’s] fingers. The little one. Then tell him his thumb's next. After that he'll tell you if he wears ladies' underwear."- Reservoir Dogs

The passage above is from director Quentin Tarantino’s critically acclaimed first film, Reservoir…

On Being Vessels of Light in this World

Below is an excerpt from Earlham School of Religion Geraldine Leatherock Professor of Quaker Studies Stephen W. Angell May 9, 2014 ESR Baccalaureate Address. So the jars that Paul and Parker are talking about are different from the jars in your kitchen, that are meant to hold stuff. What is held in our…

The search image unconditioned and unmediated.

In order to survive, some plants, as humans, cling to a supporting host. Mere survival soon gives way to the need to flourish. No longer satisfied to be hidden in the shadows of obscurity, these young upstarts climb…

ESR graduate Anna Woofenden offered an inspirational and moving welcome message during the 2014 ESR & Earlham commencement service. If you weren't able to hear it in person or virtually, the following is the text: 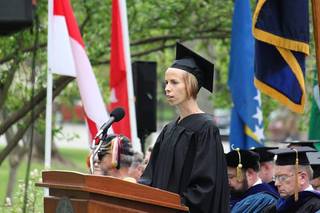 Welcome, each of you, here to celebrate the graduation of your students, your friend, child, loved one, and…

and some seed fell on good ground.

Mat 13:8 But other fell into good ground, and brought forth fruit, some an hundredfold, some sixtyfold, some thirtyfold.

Our Hydroponic pepper plants here at South Dr. are looking good. No good soil, just monitored water fed just enough nutrients to replace that which the good soil would have provided. Some of the tomato plants in my little grow bags are also doing well so I guess my home made potting soil is good enough…

A brief introduction to Quakerism in Icelandic

This is a rather random thing to post, but I'm hoping to bring some Icelandic seekers to quakerquaker.org and I wanted them to be able to find some info in Icelandic. I wrote it on an electronic typewriter then superimposed pretty things onto it in paint.net :-D It was fun!… 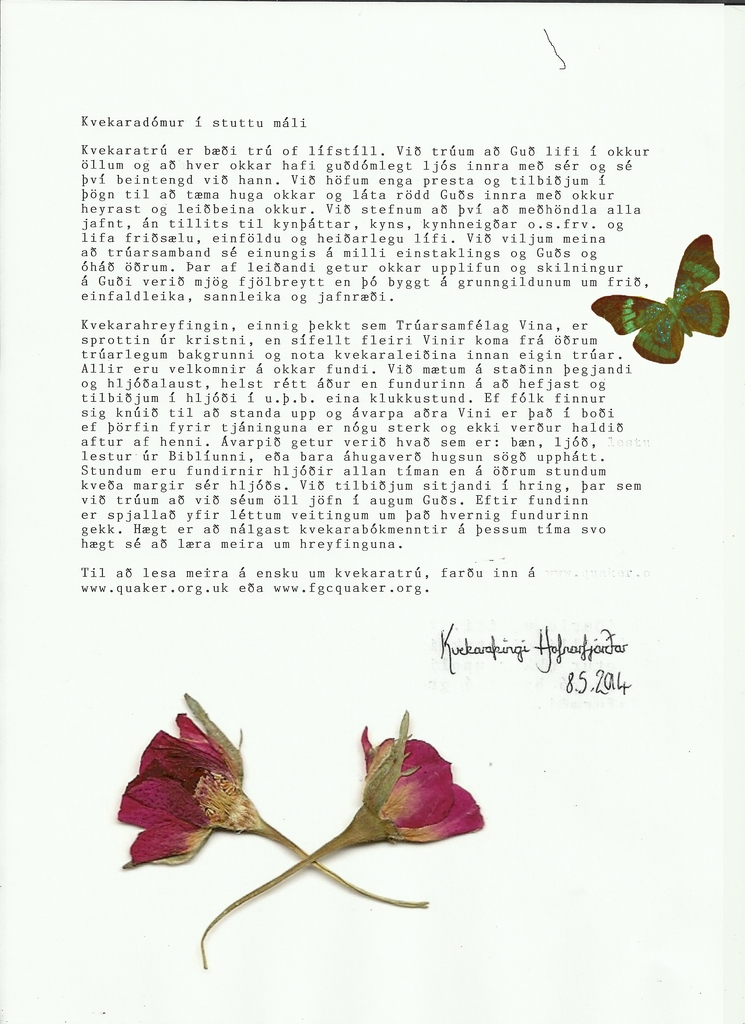 The eternal Seed thrives in any condition and under any circumstances. But about that day or hour no one knows, not even the angels in heaven, nor the Son, but only the Father.

Without solid facts to support a case, we can only concede that we’ll know it when we see it. Each of us has experienced times where God seems distant. I’ve always been skeptical of believers who claim that…

The Case of Foundation vs. Skylight

Foundation: Need we point out to the Court of Quaker Opinion the essential foundation of Quakerism?

Skylight: Would that be faith and practice, reason or the Bible?

Foundation: All of the above.

Skylight: Nolo contendere - all known by, and with, the Church's one foundation, who is above your foundation(s).

Foundation: So what's the purpose of the skylight?

Skylight: To allow the Light of immediate revelation for what Oliver Wendell Holmes called the…

Living in and knowing the sufficency of the thing itself.

Living in and knowing the sufficency of the thing itself.

Can religion be a part of business life?

ESR student Karen Tibbals is organizing the first US meeting of Quakers and Business and presenting a workshop at Friends’ General Conference Gathering in July:

Talking about a Queer Quaker Response to Climate Change

Last year I visited Guilford College in Greensboro, NC and presented the first inklings of a talk around the odd question, What is a Queer Response to Climate Change? As a gay guy, a person of faith from a Christian background now sporting Quaker bonnet and Friendly ways, I daily feel pulled in many different justice directions as my social media feed gets bloated with scores of vital worthy causes--LGBTQ Rights, immigration reform, the reform of the prison industrial complex,… Continue