Joshua 9 - The kings west of the Jordan band together to fight the Israelites.  They are kings of the Hittites, Hivites, Amorites, Canaanites, Perizzites and Jebusites.

The Gibeonites who are near the invading Israelites decide to fool them, dressing up in rags and taking along old wineskins, etc to try and make it look like they have come from very far off.  They approach the Israelites with the proposal to make an alliance with the Israelites.  The reason they…

Letting -- and the Importance of Being Led

On Earlham's website now is the Baccalaureate Speech given earlier this month by Biology Professor Bob Rosenberg, and it is very much worth reading. Each year at the college, the graduating seniors choose a member of the faculty to deliver the baccalaureate address. (That is, there is no outside speaker parachuted in for the occasion.) These addresses are consistently wonderful, and many of them are…

Joshua 8 - The Lord prepares the Israelites to take the city of Ai (the name of which actually means “ruin” according to Eerdman’s) and this time allows them to take booty.  He sends 30,000 men to lay in ambush to the west of Ai and then approaches the city with the rest of his force.  When they attack him, he pretends to flee and they pursue, leaving ambushers in position to attack from the west and burn the city.  When the main army sees the smoke, the turn and attack too.  The…

Below is an excerpt of a poem ESR student Anna Woofenden recently posted on her blog (http://annawoofenden.com) as part of her Pilgrimage Summer series:… 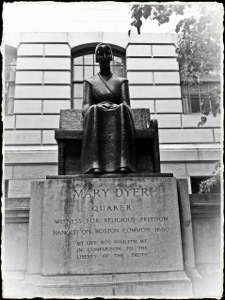 Joshua 7 - Unbeknownst to Joshua ,someone among the Israelites violates the ban and keeps goods for himself.  A similar offense will later cause problems for Saul.

Because of this, the Lord forsakes the people at Ai and they are defeated there.  Joshua is told he must find out the perpetrator and let him be destroyed by the fire of the Lord, because by his act, the people have violated the covenant.  The guilty…

Joshua 6 - The city of Jericho is under siege and the Lord instructs Joshua to have the Israelites circle the city for six days blowing seven ram’s horns.  On each of the six days, they shall march around once with the ark in procession, making no noise other than the blowing of the horns.  On the seventh day they are to march around seven times and then stop to raise a huge shout that will brings the walls crashing down.  The Jerusalem Bible note…

Memorial Day and the Heart of God

Today is Memorial Day and days like this always come with mixed feelings for me, as well as for many others. We are grateful for the service and sacrifice of our veterans, yet we do not want to celebrate the spirit of nationalism and violence. I am aware of the theological complexity that comes with remembering our country’s wars and warriors. I am also aware of the pastoral complexity. My focus has moved from moral statements about war and peace to queries like “how do we create space for…

A high school girl in a band uniform singing the National Anthem, old Corvettes and Thunderbirds, men in uniforms from various services and decades, motorcycles, a bagpipe corps, the wife of the Governor, decorated floats, families along Main Street in lawn chairs, and everywhere flags: these are the makings of a Memorial Day Parade. Here in Maine, Topsham and Brunswick have a big one each year. My son marches as a member of his Cub Scout Pack. This year he…

Joshua 5 – When the people of the region hear that the Israelites have crossed the Jordan in such a miraculous way, “their hearts melted, and there was no longer any spirit in them” (5:1).

We learn in this chapter that all the men of military age who were circumcised before leaving Egypt have died in the desert passage.  Meanwhile the sons born in the desert have not been circumcised, so this is something that must be done now that the people are…

I enjoy Light Led, discerned  vocal ministry.  I feel led maybe once a twice a year to do this.  No doubt - the holy silence @ Meeting is strong enough to stand solidly on its own.  I love the healing, nurturing and stress relief-of this silence-especially in our chaotic world. Still I feel that many Friends are, like I feel- somewhat clueless on this. What does Light led mean- what does discerned mean? Is there a "best practices" on Vocal Ministry that has worked elsewhere? What can each…

Joshua 3 - Joshua continues with instructions for crossing the river Jordan.  The Levitical priests carry the ark a minimum of two thousand cubits ahead.  “Joshua tells them, “Follow it, so that you may know the way you should go, for you have not passed this way before.” (3:3-4). When the priests go into the river, they are to stand still in it and it will stop flowing.

“While all Israel were crossing over on dry ground, the priests who bore the ark of the covenant of…

The books of Joshua, Judges, Samuel and Kings are called “the Early Prophets” in the Hebrew Scriptures. They cover the transition from the Mosaic period to the establishment of the people in the Promised Land, their infidelities and identity dissolution under the judges and ultimately the establishment of the monarchy. Some scholars place Deuteronomy in with these books as the first of the series, but not all agree. The introductory note in…

Numbers 35 - Cities are set aside for the Levites who have no allotment of land.  Six cities are established as cities of asylum where homicides can take refuge.  In addition there are 42 other cities together with pastureland.  The land is to be ceded by the other tribes in accordance with the size of their respective allotments. The deal with the cities of asylum is that homicides shall not be subject to blood vengeance (by the family of the victim) “unless he is first tried…

I must admit that, were it not for the One who could speak to my condition when I was the same age as George Fox was, I would have gladly been schooled in natural theology for my religious education. For I, like another Delco Quaker, love botany and words, such as "epinasty", that give me perspective on contemporary Friends' "uppity situation".

Disillusionment with mainline religions while discovering an egalitarian alternative in Quakerism, more and more new growth could subject us…

Become a key member of an international solidarity organization based in St. Petersburg, Florida and Managua, Nicaragua.  ProNica was founded by Quakers in 1986 with the underlying premise that people in marginalized communities understand their own realities and are in…

Numbers 33 - Recounts in detail the route the Israelites take into the Promised Land and the division of that land: Egypt to Sinai (42 stations in all).

Sinai to Kadesh; then Mt. Hor to Ezion-geber; and finally, Ezion-geber to the Plains of Moab.   Moses tells the people when they enter the lands the Lord is giving them and destroy the stone figures and images of the people whose land they will be taking.  “[I]f you fail to drive out the people who live in the land,…

In response to a recent blog post on the seepage of the doctrine of Biblical inerrancy into Quakerism, a Friend asked for examples. Here is one.

Numbers 31 - Twelve thousand men, 1000 from each of the tribes, are sent out by Moses to attack the Midianites and execute vengeance upon them in the name of the Lord.  Phinehas is the priest of the campaign.

Every male is killed, plus five kings, and Balaam--women and children are taken captive along with other booty.  They are taken to Moses at his camp on the plains of Moab.  Moses becomes angry with the officers for their having spared the…

Numbers 29 - Continuing on with this reprise of the sacrificial offerings throughout the year:

A Penchant For Praise

No one knows better than a person of German ancestry the shame at disgust. Whether idleness when there is work to be done or laziness when things need to be cleaned and put away, the disgust of waste shames those who do not suffer inactivity well. But from whence has Quakerism's penchant for activism arisen?

Is it derived from a puritanical ancestry and its ethic of work? Is it a natural balance to what seems like inactivity in our worship? Or, is it shame at our disgust of…