Quaker Quotes of the Day

I'm starting a new daily Quotes blog over on this new Quaker Quotes of the Day blog. My apologies for the duplicate posting, I'm just getting the system in place! See also: my post about this on Quakerranter.org.

What if I can only bring you a debt?

We don't live in the old times where debts got written off every seven years in Jubilee. How many of the people you know and who live near you are tied into their lifestyles of bad work and bad consumption by the need to repay debts?

I think the traditional Quaker understanding that a person had to be free of debt to be a good disciple is pretty radical. I want all people to have freedom to choose but how free can we be if debts keep people trapped in bad work, bad consumption to… Continue

What to do while waiting patiently

Patience is a forced virtue. My hypotheses is that you learn it and practice it involuntarily. My personal circumstances over the past two years have put me in a situation where God has forced my hand: I have no control over the timing or outcome of things, only the control over how I respond to the events He has placed in my life.

A personal note: Nearly two years ago, I accepted a role in my company that requires I live/work in the Northwest, and since then, I've been commuting… Continue

My hope is in God's peace-making power

[Taken from my response to Marv Ostberg's blog post.]

I'm pretty young and idealistic I guess, but here, I'll try to describe the way I'm seeing it: God's justice is peacemaking, it tells me I have to work together with you and everyone to find the way we can live on the planet even with those who hate us and blame us and don't want us to exist. That's why we have to pray for our enemies. When I pray for my enemies I get really changed by it. I can see them as people. I hope for them… Continue

Isolated Friends, helping each other?

At the moment I have such a strong sense that following God is a communal activity. I don't know if any of us are strong enough to do it alone. Jesus was upset, he needed his friends to watch and pray when he was facing the difficult stuff.

I have a Meeting relatively close (1.5h walk, 35min bus) but I want to have Meeting with the people in my street and the surrounding streets.

One of Those Externals....

Just a suggestion... but how long does it take a typical Quaker to get tuned in?

My impression is that it takes longer than an hour.

I know we've had some groups experimenting with at least occasional longer meetings. Even considering the fact that these would be self-selected, unusually spiritually-inclined members in the first place--I understand that the results have been generally good.

Over an hour is not unusual for a church service.

Yesterday I got a strong sense of why traditional Quaker preachers were so keen to suppress their own personalities.

I still think it was an error, from applying a crude theology to reality: the notion that we are a Christ spirit tangled within an unruly animal self--within a personal self that must be murdered to let Christ rule in us all alone.

But I had this responsibility to not blow it, to pass on the Transmission with the cleanest possible signal.

Scott McKnight on gospel and community

I know, I know I said I was taking a break but seriously read this if you are interested in evangelising/Gospel Order.

This is explaining some stuff I've been… Continue

Forrest wrote: If we bring to bear the collective attention of a group of interested people, mentally centered and open to whatever message the Spirit may have for us, on some specific occasion, then we can see God at work, using it in and among us!

Yeah! I guess this is where I'm at. I want to live in this living tradition with all of you, but I don't see how we can do that unless we are doing it together, like we are here on QuakerQuaker and in our Meetings. If we're not… Continue

It is all about the Spirit 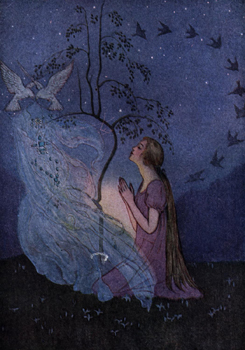 For me all the reasons I am a Quaker are more superficial and it is not about the qualities that define my Quakerism, but my relationship to God/Spirit.

As I have learned to see 'that which is of God' in every one, I have learned to give up judgment and love each person for who they are, regardless of their beliefs and practices. I fully understand that some people need different practices in their religious services than the… Continue

I did church crawl the next week. I went to a yuppy church near my apartment. This is one of those churches were there's one old couple, but everyone else is 20-30 somethings. The opening hymns were played by a rock band. I had to give them credit for being great musicians--even if they were the type of Christians who creep me out. They seemed to be of a self-righteous bent. These are Christians who are frustrated because they limit themselves to tools and…

I went to the meeting the next week. I couldn't resist. Those three hours I'd spent at meeting the week before had been the shortest of my life. I felt completely at home. I had read everything I could find on the internet about the Quakers. I had to know if that was a fluke or if that experience was my home, at least for now.

I will say that the next meeting was less impressive than the first, but still excellent.

I managed to show up…

I had almost forgotten how I discovered the Quakers! So I'm grateful that I left detailed comments in my first blog post on this site. Here they are reproduced, from May 17th, 2009 (5th mo. 17, right?):

One day, I conceived the idea of doing a church crawl - a trip to a different church every week. After much hemming and hawing, I managed to drag a friend along. We went to a Catholic church in an up and coming…

I'm interested by my reaction to people posting extensively or leaning heavily on from other holy books - not our own scripture - here on Quaker Quaker. I wanted to ask for more explanation of why that is relevant to in this space where we are attempting to be Quakers together, and I guess I didn't do that in a very skillful… Continue

THE ETERNAL SOURCE - A NEW INTERPRETATION OF THE TAO TE CHING FOR THE 21ST CENTURY, BY RICHARD GORDON ZYNE

To Paula,
a pure emanation of the ETERNAL SOURCE.

For my wife,
my children,… Continue

Watching a Dream Grow Up

Watching a Dream Grow Up - The Bridge Film Festival turns 10 in the country where the Society of Friends began.

(until we get a site that supports this elsewhere)

This Matter of God

Many of the difficulties of atheists... come from the way God has been described to them.

They start wrestling with the question, "Can an infinitely good being be in charge of, be responsible for, this universe full of Historical Events and other forms of suffering?" They see some Christians in terror of this allegedly good and loving being, whom they are told intends to inflict eternal suffering on many people for having turned out Bad--or merely turned out impolite to deities, too… Continue

Is cooking a divine gift?

Just posted on Hungry Friends about a book that inspired a conversation about many things, including whether good cooks have a certain divine je ne sais quois, or if they just follow cookbooks really well. What do you think?