Psalm 138 – This is a psalm of thanksgiving for God’s constant love and teaching. “I give you thanks, O Lord, with all my heart; I will sing your praises before the gods” (138:1). This must have been written before Yahweh had become the ONLY god, when He was only the HIGHEST god.

“You answered me when I called to you; with your strength you strengthened me” (138:3).

“Though the Lord is great, he cares for the…

The Nuts and Bolts of Primitive Christianity

When Jesus told his followers, "...apart from me, you can do…

January is Peace Month in Northwest Yearly Meeting, and at North Valleywe kicked off the month with a discussion led by Lynn Holt on "Unity through Tension."

Flying under the radar

Can't seem to get this little guy – I think he once told me Antonio was his name – out of my head. He's an elementary-aged student, probably seven or eight, in a school for autism-spectrum kids that occupies a part of the building where my art studio is located. As I come and…

The Idolatry of God

He is kind and greater than all the gods. “He causes the clouds to rise over the whole earth. He sends the lightning with the rain and releases the wind from his storehouses” (135:7).

In Egypt, God “performed miracles and wonders” (135:9). It is God who brings down nations and opens space for His…

Psalm 128 – “Happy are those who obey the Lord, who live by his commands” (128:1). You will work and your needs will be met; you will be prosperous and happy. Your wife will give you children and “your children will be like young olive trees around your table” (128:3).

We're excited to introduce to you some of our new students joining us for the spring semester of  the 2012-13 school year. Today's featured student is Michelle Wood, who is an MDiv student from New Castle, IN. My life’s passion is missions work.  I like to encourage everyone to go on at…

“Praise the Lord, who did not let their teeth tear us apart! We escaped like a bird from a hunter’s trap. The trap is broken, and we are free! Our help is from the Lord, who made heaven and earth” (124:6-8).

Psalm 125 – “As the mountains surround Jerusalem, so the Lord…

Ok, so I admit to being a bleeding heart. And, yes, my philosophy is even left of liberal. But I am also open to all views and love to learn. With that, I embarked on reading a rather long blog written by an interesting novelist who owned a gun store, is a firearms’…

This year, 2013, is the 200th anniversary of the publication of the Quaker work “A Guide to True Peace”.  It was originally published in England in 1813.  The first American Edition is dated 1816; so it found a place among American Quakers very quickly.

It has been in continuous publication ever since its initial offering.  There are numerous editions published in the 19th century.  I…

Psalm 120 – “I took my troubles to the Lord; I cried out to him, and he answered my prayer. Rescue me, O Lord, from liars and from all deceitful people” (120:1-2). David speaks of the people around him as people who hate peace. Just imagine what it would be like to be a ruler in these days with attacks coming from all sides and having to deal with them.

“I am tired of living among people who hate peace. I search for peace;…

The Mystical Body of Christ

Growing up Catholic in the '50s, attending Catholic Elementary School under the aegis of the Sisters of St. Joseph, I would occasionally hear that there was a "Mystical Body of Christ" to which all believers who ever lived belonged.  Well recently, as will happen on occasion, words from the past got attached to a mental image that hopefully sprung from my soul.  As I was allowing my mind to freely navigate through thoughts of relationships appeared a maze not of walls but of electrical…

Pray It Till Thee Canst Live It

All Quakers should know from our history that William Penn, being of an aristocratic and military family, carried a sword as part of his family's investiture. So when Penn became a Quaker, he asked George Fox if he should "quit" it, as the expression went. Contrary to the staunch image that many ascribed to Fox, George told William to carry his sword until he could no longer do so.

Am I wrong to equate Quaker evangelicals with this account of William Penn? Are you not of a noble and… 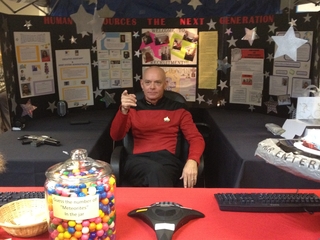 Entering seminary at ESR in this season of life is wondrous.  While I, like others here, always felt a leading to pursue formal vocations in ministry, I don’t regret for a moment the time of preparation, wandering and growing that preceded this particular moment.  I am certain that God in God’s wisdom had a calendar notation that Marshall would enter seminary in…

Psalm 114 – “When the Israelites escaped from Egypt—when the family of Jacob left that foreign land—the land of Judah became God’s sanctuary, and Israel became his kingdom. The Red Sea saw them coming and hurried out of their way! The water of the Jordan River turned away. The mountains skipped like rams, the hills like lambs!” (114:1-4).

The liberation of God's people from slavery and their dedication to Him made all of nature change - the sea "ran" from them, the…

Can you identify which of the following quotes are from Quaker sources? BBQB-5

Can you identify which of the following quotes are from Quaker sources?  Knowing Quaker from non-Quaker writing will determines how we describe ourselves as Quakers.  How many of the following 10 quotes can you accurately place in or outside of early Quaker thought?

1    So if it could be proved -as it can not- .... that the Gospels were the fabrication of designing and artful men, that  Jesus of Nazareth had never lived, still Christianity would stand firm, and fear no evil.  None…

Psalm 111 – “Praise the Lord! I will thank the Lord with all my heart as I meet with his godly people. . . . Everything he does reveals his glory and majesty. His righteousness never fails” (111:2-3).

“All he does is just and good and all his commandments are trustworthy. They are forever true, to be obeyed faithfully and with integrity” (111:7-8).

We looked back and looked ahead this week in worship with a message and activities led by Sarah Klatt Dickerson called "Turning the Page."

Some years ago, this document was prepared for newcomers by my Meeting's Ministry and Worship committee. I think it to be an effective statement of purpose. We ought to hold ourselves accountable to it and what it says that we are.

Are you looking for an understanding of God that is viable in today's world? We invite you to join with us in our continuing search for Divine leadership in our…