A Time To Be Set Apart

“Repay no one evil for evil. Have regard for good things in the sight of all men. If it is possible, as much as depends on you, live peaceably with all men. Beloved, do not avenge yourselves, but rather give place to wrath; for it is written, “Vengeance is Mine, I will repay,” says the Lord.” Romans 12.17-19

We live in a world obsessed with violence. You turn on the news and hear…

Genesis 8 - For a 150 days, the waters are at their crest.  Then God “remembered Noah and all the wild animals and livestock with him in the boat. He sent a wind to blow across the earth, and the floodwaters began to recede” (8:1-2). After another 150 days, the “boat came to rest on the mountains of Ararat” (8:4).  Then 40 days later, Noah sends out a raven, and then a dove.  Three periods of 7 days are required until the dove can leave permanently.

Is it time, Friends, that Quakerism had its own scriptures? Not, mind you, to replace, let alone supplant, the Bible; though, in a real sense, the New Testament replaced the understandings and practices of the Old; and, the Protestant Bible, with the help of the Jewish canon, supplanted the Roman Catholic one. I'm suggesting prophetic messages, like those infrequently blessing Quaker Meetings these days.

Not taking anything away from the Quaker testimonies as our Tradition, are there…

Genesis 6 – “Then the people began to multiply on the earth, and daughters were born to them. The sons of God saw the beautiful women and took any they wanted as their wives” (6:1-2).  This story of the “sons of god” are mythological deities mating with the daughters of man and presumably bringing forth the Nephilim, from whom the heroes of men arose. The Greek myths we are familiar with are full of these stories of gods and goddesses…

Current Editions of the "Guide to True Peace"

"A Guide to True Peace" has been in continuous publication since it was first published in England in 1813.  There have been many editions.  Each edition makes editorial changes; almost all of these are very minor.  I thought I would take a moment to cover the currently available editions of the "Guide" and discuss their commonalities and differences.  Currently I am aware of five versions of the Guide that are easily available.

Falling in love with myself again 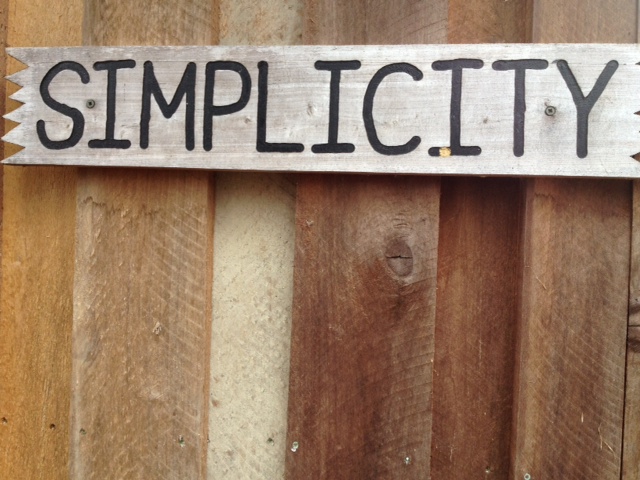 Once again, I have taken up temporary residence in a cabin called Simplicity. I seem to come back, again and again, to this theme. Here it is concrete; in this aesthetically plain one-room retreat of re-claimed materials. It is a place I can re-claim my…

Genesis 4 - The two first children of woman are Cain and Abel, a tiller of the ground (now cursed) and a tender of sheep (4:2). Their story will introduce a recurring Old Testament pattern or theme – that in a world where the eldest son always was seen as the favored one, it will be the younger, the less “important” child who will always be favored by God.

We see them here offering the work of their hands to the Lord. Cain gives…

Genesis 3 - Now the drama begins.  There is a serpent in the garden who approaches the woman and asks her if God forbade them any of the fruits of the garden, and Eve tells him of the prohibition on the tree of the knowledge of good and evil along with the threatened penalty, which I must point out is a prohibition given to Adam – before Eve was even part of the picture! She has HEARD of the prohibition from Adam.

When I got my driver's license, someone gave me this piece of advice: Remember that you're handling something that is as much a weapon as it is a convenience. At the time, I considered it an inconvenient truth. Yet, nowhere have I valued that advice more than getting on or off a highway. Unlike some drivers, I offer a signal of my intention, slow or speed up to accomodate the flow of traffic, and, most significantly, merge, not blend, with the other cars.

As Quakers on our way to…

Almeley Wootton and the Charter for Pennsylvania

Almeley Wootton Meeting is about nine miles from Hay-on -Wye and is one of the oldest, and most beautiful, Quaker Meetinghouses in Britain.

Richard Davies made the first reference to Almeley Meeting in their travels about 1669. Roger Pritchard gave the meeting house, an adaptation of earlier cottage buildings, to Friends in 1672. Since then it has been used almost continuously by Friends. Edward Pritchard, son of Roger, was one of the thirteen signatories…

We're excited to introduce to you some of our new students joining us for the spring semester of  the 2012-13 school year. Today's featured student is Christie Walkuski, who is an MDiv Cooper Scholar from Cornwall, NY. Hello friends! I am super…
Continue

Genesis 2 – God rests on the seventh day.  The day therefore becomes blessed and hallowed. Then we go on to another story of man’s creation. It is not completely consistent with the details of the first, but its focus is wholly on the place of man in the creation, man’s role in “naming” all that is, and relations between the man and the woman created.

Here the creation of man occurs before the bringing forth of vegetation and rain upon the earth.  There was a…

We modern Quakers are thieves but do not weep. BBQB-IV

We modern Quakers are thieves but do not weep.  This is unlike Margaret Fell Fox's response to the 28 year old farmer, merchant preacher's, message given before the sermon in her respectable Church of England in 1652.  Respectable modern Quakers may object that they are not now in the 38 year old Margaret's position by having stolen a Christian's profession without knowing it needs to be accompanied by a renewing possession of the Spirit of Christ.  We modern Quakers frequently quote the…

Care to hear some of the pain, uncertainty and hope being experienced by those of us who have been ‘set off’ from Indiana Yearly Meeting? Then read Stephanie Crumley-Effinger’s marvelous message from this past First Day at West Richmond Friends (formerly IYM): “Camping Out at the Borderland: Reflections on Life in a Liminal Time.”  She weaves her message around the story of Orpah, Naomi and Ruth in Ruth 1:1-14.

Genesis 1 - God creates the universe and the earth and by his word light came forth that was good and pleasing to God, not the light of the sun, for that is created later, on day four; not the light that physically gives us the experience of day and night—that too is not the focus.  The light that is created in the very beginning is a light that simply is with God in the beginning of his creation—a presence, perhaps a power that is brought forth to be a presence in and…

On a Short Leash

Had occasion to recall a dog that I used to walk. Normally, she was well-behaved and a joy to take to the park. One day, however, this good dog showed a quite different side to her regular disposition. She pulled and pulled and would not stop when I told her to heel. After several attempts at same, I was forced to yank her leash and propel her anxiousness backwards.

Apparently, a dog can forget about the person at the other end of the leash.

Now, what about dog spelled…

What you have done will be praised throughout the generations. “The Lord is loving and merciful, show to become angry and full of constant love” (145:8).

The Lord is faithful to his promises and helps those in trouble. He “lifts those who have fallen” (145:14).

And he asks God to kill his enemies, destroy those who oppress him. “I lift my hands to you in prayer. I thirst for you as parched land…

Anyone who pays an electric bill knows that it's necessary for keeping a household or business connected to power. Anyone who expects flowers, plants and crops to grow knows that a certain amount of sunlight is necessary. Anyone, then, knows the danger of entropy - the loss or diminishment of energy from outside of a system that causes the system to lapse.

More and more scientist, actually physical cosmologists, are warning that the energy of the universe is dissipating as it gets…