Carnival: Rob Bell and the Paradox of Christian Universalism 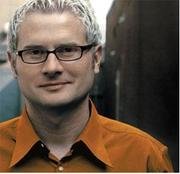 3/2011 Carnival: Rob Bell and the controversy surrounding his supposed turn toward Christian Universalism.

If you write about the topic, bookmark it in Delicious as "quaker.robbell" or post to the comments below.

About the Blog Carnival

A blog Carnival is a opportunity for bloggers to write about a shared topic for a month. It's an old idea we're trying again here on QuakerQuaker. For this first "Quaker Carnival" we've picked Rob Bell and the controversy surrounding his supposed stance of Christian Universalism. For more, read "What's a Carnival and why Rob Bell?"

Rob Bell is the founding pastor of Mars Hill Bible Church located in Grand Rapids, Michigan. He is also the featured speaker in a series of spiritual short films called NOOMA. These films have been very popular with alt-Christians, including a lot of people associated with the "Convergent Friends" movement. He's recently started a firestorm on Christian blogs because a new video promoting his forthcoming book, Love Wins, appears to embrace Christian Universalism.

Some Mainstream Christian Commentary on the Controversy:

What's a Carnival and Why Rob Bell?

The QuakerQuaker team has long kicked around the idea of sponsoring "Quaker Carnivals," monthly themes that bloggers are invited to write about. Wess Daniels over at Gathering in Light brought up the…Continue

You need to be a member of Carnival: Rob Bell and the Paradox of Christian Universalism to add comments!

Roger Olson, an Arminian Theologian, has today posted a brief comment on Rob Bells' book.  According to Olson, Bell does not advocate for an heretical universalism and Olson thinks many critics owe him an apology.  You can find his post at:

The title of the post is "The Promised Response to Bell's Love Wins".

In one of my comments to my own VERY brief essay, I linked to some longer essays. Mine is just an answer to a face-book comment.