When You Wish upon a Star: The Projection Theory of Religion, by Winston Davis

In “Darwin’s Dog, or the Evolution of Religion,” Part 1 of his "Religion, Briefly Considered" blog series on Quaker Universalist Conversations, Winston Davis discussed the theory that,

like Darwin’s dog, humans have an innate, hyperactive tendency to detect personal agency in the natural world…. [Once] we learned to speak, the tendency to see invisible, personal agents at work in impersonal, natural events virtually hard-wired us for religion, at least for theism….”

Winston continues his series with Ludwig Feuerbach’s “projection theory.” Here is an excerpt.

When You Wish upon a Star: The Projection Theory of Religion
(Religion, Briefly Considered: Part 2), by Winston Davis

Although German philosopher Ludwig Feuerbach (1804-1872) was an atheist, he thought that disproving the age-old arguments for the existence of God was a waste of time.

The true atheist does not directly contradict the belief in God. He explains it; he acknowledges the factors that support it. He understands it as an objective, indeed an absolute necessity for the better part of humanity, even though for the atheist this necessity is only subjective. 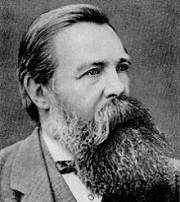 Human beings, Feuerbach argued, are dominated by a “happiness drive.” For the most part, we are able to satisfy this drive naturally, i.e., in a “secular” way. We do things for ourselves. When we are hungry we find something to eat. When we are cold, we find shelter.

The gods come into the picture only when we are frustrated, when we can only wish for what we want. The gods are merely imaginary beings who satisfy wishes. The wish is therefore the beginning of religion. God himself is made of wishes. He is, in Feuerbach’s German, a Wunschwesen [literally, “wish + being”]. Feuerbach calls the wish that creates the gods the “theogonic wish.”

We create the gods first by “projecting,” “objectifying,” or “reifying” them. Feuerbach describes this process in terms borrowed from the dialectical theory of his teacher G. W. F. Hegel (1770-1831). In rather thick, philosophical prose Feuerbach writes:

Man—this is the mystery of religion—projects his being into objectivity and then again makes himself an object to this projected image of himself thus converted into a subject; he thinks of himself as an object to himself but as the object of an object, of a being other than himself. Thus…man is an object to God.

Read the full text of "When You Wish upon a Star."

My feelings are similar to Keith's.  The only projection I see here is coming from Feuerbach.

I don't find these posted observations insightful; they feel arbitrary and ad hoc.  There is nothing 'scientific' about them.  They are a type of storytelling, nothing more.  I find them a type of glib psychologizing.

Two can play at this game -- Atheists are projecting their desire for happiness onto a universe which does not work to call them to account for their negative deeds.  In an atheist world, the negative deeds one has done have no ultimate consequences and so one gets to escape from them.  Since it is human to engage in activities that we later regret, to engage in deeds that we later think were not the best, the atheist constructs a universe such that they will be able to dodge the consequences of those deeds.  No doubt this is very comforting and fully explains the appeal of atheism to a certain kind of person.  This appeal is what drives the atheist conscience; this emotional need to dodge the cosequences of ones deeds is then hidden by a glib rationalistic analysis so that they do not even have to confront their own strategy.  It is all very neat and, at the same time, vacuous.

Thanks, Keith and Jim.

I personally agree with both of you.

As blog editor for a universalist audience, though, I welcome a broad array of views.  Quaker Universalist Fellowship's objective in publishing the blog is to open up conversation in as many ways as possible.

There is an interesting sort of listening involved for me in doing my best to edit and format and illustrate and provide hyperlinks to these blog posts.  I believe it is worth the effort to invite our readership into the discussion.

Thanks again, and
Blessed Be,
Mike Shell

So Jesus wanted to be hung on a cross because he was a masochist?  Moses left a comfortable life because he was delusional?  And they each got others to follow them because people needed to leave the known for the unknown?  Believing in a higher life purpose than self indulgence is what separates humanity from it's half brothers and sisters in the animal kingdom which is 100 % hardwired for self preservation.  I can see Jesus now in his Father's carpenter shop thinking to himself: "I can't wait to get out of here so I can be hung on a cross and spit on."   The folly is thinking that Atheists don't have the same yearnings for a higher purpose than Theists.  They just choose to think they have those yearnings as a result of some cosmic fluke whereas Theists choose to believe that yearning is a part of a Creator that has put part of him or herself within them in some unfathomable way for His or Her own purpose(s).  In the end it doesn't even matter what an Atheist or Theist believes it only matters what they do with those yearnings to live for others that arise within them.

In the end it doesn't even matter what an Atheist or Theist believes it only matters what they do with those yearnings to live for others that arise within them.

This speaks to the heart of Quaker life: not the irresolvable debate over higher causality, but the challenge to meet each person and every person as a full human being.