Dana Densmore [editor of my current readings from R. Schacter-Shalomi]:

"Michael Fishbane brings in another dimension in his book _Sacred Attunement_. He ... describes ... the divine reality that precedes the written Torah, calling it torah kelulah, 'Torah of the All-in-All.' This is something he says we can read for ourselves in all of existence.

"There is something experiential here. To learn from this torah we must be attuned to the divine presence."

Intrigued, I wandered virtually to here: https://kavvanah.wordpress.com/2009/09/21/sacred-attunments-part-1/ and a review by Alan Brill, saying (among other things): "We have an opening to receive God’s word in everything if we are 'attuned' to it.  The fullness of Torah Kelulah is unsayable.  What he calls the 'Torah Kelulah' is a caesural opening in which God’s creative power issues forth into a manifest universe that includes a system of natural law and the moral reality of human existence. It is the 'kiss of divine truth on the vastness of world-being.'”

For all the persistent Christian stereotyping of Judaism as a literal, letter-of-Law religion, the elements of 1st Century Judaism Jesus received and emphasized were clearly not like that -- and later Judaism, like Christianity, has developed those same strains.

We have examples from many religions of teachers & teachings that sound (in some sense) even more quakerish than many Quakers.

Without rejecting the scriptures our civilization was given -- or denying their manifold warts -- can we treat them as partial revelations (still of value) of the fuller knowledge God means to impart through them?

Sometimes an ancient perspective can provide an essential correction on our own math... and sometimes it's just an ancient mistake. We too make mistakes, which none the less represent steps towards a truer sense of itall...

Does it give a mention to Stephen Gaskin? 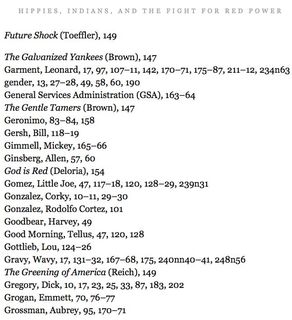 Thank you for mentioning the guy, a hole in my awareness -- I just finished reading the Wikipedia article on him.  The history of one's own time is one of the last one learns about as what's settled and most shared is more safely about Greece and Rome, Olde England and like that. :-D.  Looks to me like The Farm, near to Nashville, escapes the locus / scope of this more West Region tome, however Wavy Gravy and the Hog Farm collective are much mentioned.  As for me, I lived in Rome, Italy during the tumultuous 60s, then bounced to the Philippines (then under martial law) for high school, thence Princeton and Jersey City winding back up in Portland, Oregon, where I started before Rome.  I've been putting the puzzle pieces together ever since. :-D

(Sorry abt plugging the Evil Amazon; your library might have it.)

And perhaps this is what 'Torah Kelulah' is pointing to:

"You don't do it through intellectual processes. What you do is you telepathically tap in to the one great world religion,
which is only one,
which has no name,
and all of the other religions are merely maps of that."

Yahweh is my shepherd, I lack nothing.In grassy meadows he lets me lie. By tranquil streams he…See More
18 hours ago
0 Comments 0 Likes

"Thats a nice photo.  Road trips are so enjoyable. "
20 hours ago