Sallie B. King is the author of many titles on Buddhism, Quakerism, interfaith dialogue, and the cross-cultural philosophy of religion. "A Quaker’s Response to Christian Fundamentalism" was first published in 2009. 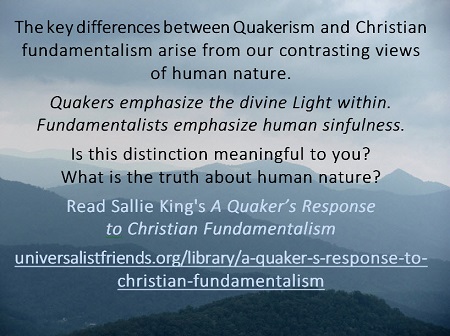 Thanks, Forrest.  I just discovered that I had given the wrong link and have corrected it above.

Not knowing what readers it was meant for, I was a little puzzled why she was concerned with the subject. So I wasn't sure what to say, particularly about passages like:

"I have in mind the set of views that includes biblical inerrancy and literalism, salvation through the substitutionary atonement of Jesus, strong emphasis on human sinfulness, and strict Christian exclusivism."

I realize the piece is called "A Quaker's View.." rather than "The Quaker View..." but notice that there seem to be people here whose views resemble those. Perhaps (although Christianity constitutes an essential chunk of The Big Puzzle) these are afflictions endemic to Christianity itself?

We seem to find many Quakers, from quite early on to the present, who combine both views, with different emphases directed to 'human beings as-is' vs 'human beings who've come to see their natural selves as Truly Awful, only fit to live because [they think] they've had all that vacuumed out & replaced with Unnatural Goodness.' I'm sort of appalled by the doctrine, despite the many truly nice people who've taken it as gospel for some reason.

What I'd call the truly Christian view of this would be that "The Devil [that is, 'the Accuser'] always was a liar." Human beings really aren't that truly awful self-image (any more than we're that ideal self-image we'd like to be) but in a world of lies and wickedness people really do resemble it uncomfortably well.

In fact, a big chunk of what I consider to be truly Christian is precisely what makes makes many Christians think of me as 'one of them Liberal Heathens'. Such issues can be much harder to sort than "Universalist Friends vs Fundamentalists," (labels which tend to hide people behind big stripey targets.)

The intended audience for the pamphlet is Quakers–especially younger Quakers–who lack the biblical literacy or the depth of understanding of Quaker teachings needed to respond to fundamentalist challenges in a constructive way.

I had not yet read the pamphlet when the QUF steering committee asked me to post this invitation for comments.  I am reading it thoughtfully now and will share my personal responses later.

Meanwhile, would you be interested in letting me re-post the above comment on the QUF blog item https://universalistfriends.org/weblog/revisiting-a-quaker-s-respon...

Better still, would you be interested in writing a blog post giving our global QUF readers your own faith and practice responses to the issues Sallie raised?

Thanks for your thoughtfulness,
Mike

Repost if you like; but as for a blog post on this, no. I agree with her too much for an interesting contrast -- and where I disagree, explaining why would take things too far off-topic.